The morning was sodden, however, spirits were as high as the amount of rainfall, and in some cases higher than fitness levels when we met at Platform 9.

We were one of three groups making our way to Paua Hut and one after the other we discovered we would not actually sleep inside the hut as the key custodians still had the key in their custody in Wellington and we had the wrong key. Truly resourceful, our group shimmied in the window of a nearby DOC hut with packs in tow (only to discover the door was unlocked anyway).  Notes were scrawled on damp paper to let the other groups know they could seek refuge in our discovered DOC hut.  They arrived freezing and steamed themselves back to consciousness by the fire with mugs of milo.

We whiled the afternoon away discovering chaotic ineffectual ways of playing cheat and next day woke up to a river that was chest deep.  We trekked 3 hours the long way round across some farm land to the coast. 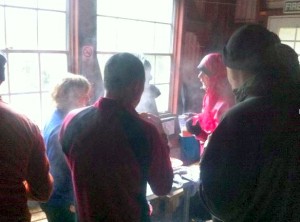 Somehow we all ended up back in the carpark at around the same time and even re-civilised at a Petone cafe (unless that’s an oxymoron) over Petone coffees.

A fine bonding experience in the Orongorongas.