Two weeks out from the trip, leader Debbie emailed us two plans.  Plan A would be Taranaki South Face ALP1 (M) – subject to the weather, snow conditions and avalanche risk.  Should the weather, snow conditions and avalanche risk not be to Debbie’s liking, then Plan B – a tramp around the Pouakai Loop (M) would be our weekend activity.  The decision on which plan, would not be made until the Friday when the weekend mountain weather report came out.  Having recently done the snowcraft course and keen to start cementing my new skillset, I confirmed my commitment and hoped Plan A would come to fruition.

Two days out from the weekend, the stars were aligning nicely for an ascent of Taranaki – the Mighty Mounga.  Plan A, it looked to be.

With Henry at the wheel until Bulls, then Mike, we had an uneventful but comfortable road trip to Dawson Falls Visitor’s Centre on the South side of Taranaki.  We arrived at Konini Lodge, Dawson Falls around 2230.  We unpacked what we needed and settled into our bunk room.  As we disappeared into our sleeping bags, we were perhaps all wondering if we were in for a cold night (however, if Konini Lodge was cold, what was Syme Hut the following night going to be like!)

We woke to Debbie’s alarm at 6 am (Debbie admits she likes to ‘flaff’) and met our other Konini lodgers over breakfast.  They pretty much had the same agenda as we had – an ascent of Taranaki – except they would be enjoying the comforts of Kapuni Lodge just below the bush line that night while we would be hunkering down in a chillier Syme Hut.

With heavy-ish packs (tents and fly in case Syme Hut was full; and water in case the tank was frozen) we began our day up the Fanthams Peak track through the beautiful Dawson Falls bush.  Three hours twenty minutes later, 3.9 kms in distance, around 13,500 Fitbit steps and 1009m in elevation, we reached Syme Hut late morning.  For a newbie to the snow, it was a great experience.  Snowcraft 2016 however seemed like a play in the park (not the self-arresting class though) compared to the climb to Syme Hut.  What I didn’t expect was the workout on the calves!  It was a challenge, physically and mentally, but that’s why we were there, and even if it was me ‘bringing up the rear’ I never doubted I would get to the hut.  Besides with Henry zig zagging back and forth behind me like a sheep dog herding that last stray sheep to the pen, I had subtle encouragement to keep moving.

We arrived on Fanthams Peak with low visibility and no hut to be seen. Debbie got the compass and map out to navigate us to our alpine accommodation.  However, just as she was sorting the direction out, a break in the clouds showed us the way instead.  The hut appeared a couple of hundred metres away and what a sight it was.  Syme Hut was in its glory covered in wind frozen masses of ice and icicles in all shapes and sizes, both vertical and horizontal.  It reminded me of an iced gingerbread house, but was not for eating – it was to keep us comfy for what could be a cold night.  (Locals, who followed us to the hut on a day trip, told us the hut’s nickname is “The Fridge”.)  After chipping away the ice from the door, we got into the hut to lighten our packs in preparation for a post-lunch attempt at the summit.

Of our party of eight intrepid alpinists, six of the more intrepid, continued with Plan A’s aim to attempt the summit.  So off went Debbie, Henry, Weimin, Sam, Lettie and Patrik.  Mike and I chose to sit the summit attempt out.  So after accompanying our more intrepid fellow alpinists to the other side of Rangitoto Flat (an ideal place for self-arresting practice) and watch them get smaller and smaller as they ascended South Face (we could hear them talking and the crunch of their crampons long after we lost sight of them) Mike and I made our way back up to the rim of Fanthams Peak.  Of course, not wanting to miss out on bagging a peak ourselves, we made a most successful ascent of Fanthams Peak at 1966m now in glorious sunshine with incredible views.  (While Syme Hut is perhaps no higher than 1960m, a peak even at 1966m is still a peak, especially for a couple of graduate snow crafters.)

Mid-afternoon, with fine-tuned hearing in what was returning to be white-out conditions around the hut, we hear the crunch of crampons.  But the crunches are much quicker than they were before so I guessed the group was on their way back down.  A little while later, the six more intrepid alpinists came through the hut door (probably hoping for hot tea and scones).  Icy conditions at around 2200m suggested to them to try the summit another day.

Debbie and Henry possibly felt short-changed with not getting to the summit, so not long after getting back to the hut, the two of them were back outside with axes and shovels making a path to the toilet.  (Debbie didn’t want us to have to mess around with crampons if nature called during the night.  How cool is Debbie!)  So by late afternoon, we had an architecturally designed path to our ice covered long drop. 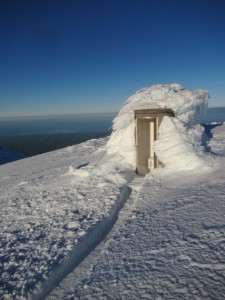 Our landscaped path to the toilet was a god-send that evening, being well used after our delicious and fulfilling Pesto Bean Pasta which Debbie and Weimin cooked for us.  Entertainment for the evening was good conversation and included Sam telling us a scary story, complete with special effects with torchlight from under his chin.

Despite lots of discussion as to where and how we should all sleep – not that Syme Hut offers many sleeping configurations (Lettie was keen to have all eight of us side by side on the top bunks for warmth given that any heat there might be should rise to the rafters), we spread out with four on each level.  Surprisingly it was a warm night for all.  Perhaps eight warm bodies are sufficient to heat Syme Hut in the winter.

At the tail end of a very clear night, we woke to the most glorious of sunrises.  The stillness, peace and quiet as the sun slowly rose and cast its light on the Mighty Mounga slopes, the hut as well as its picturesque long drop, was magical.  We were in awe of what we were experiencing.  Henry rightly questioned why anyone would want to live in the city (other than for the cafes that is).

At around 0930, once the sun had had a chance to melt some of the ice, and after the six more intrepid members of our party got their opportunity to bag Fanthams Peak and the neighbouring knolls, we started our descent.  Although I again brought up the rear (or should that be ‘brought down the rear’) I found the descent much easier – I could tell my quads were going to do me proud today.  By the time we got to the first rest stop, we had all mastered a fine John Wayne walk.  (On the ascent the day before, we perfected the Charlie Chaplin stand when resting on the slope.)

Despite cloud looming to the east of us since sunrise, it remained a respectable distance giving us superb views all the way down.  We reached the Visitor’s Centre over an hour ahead of schedule (a lighter pack and gravity might have been contributing factors) so Debbie announced two post-climb Plans.  Plan A was to drop the packs and have a Sunday afternoon stroll to Hastie’s Hill, or Plan B a somewhat shorter stroll to the café.  Initially, there was a good level of interest for Hastie’s Hill, but slowly one by one we shifted our interest from walk to café.

For a first ALP1 trip, Debbie and Henry made the experience a very positive one and I won’t be alone in being very appreciative for that.  If it wasn’t for leaders like these guys, those looking at a club to provide them experience in the NZ backcountry in a safe, fun, educational and supportive environment, would not get the opportunities and character building experience like what we had on Taranaki.  Thanks Debbie and Henry. 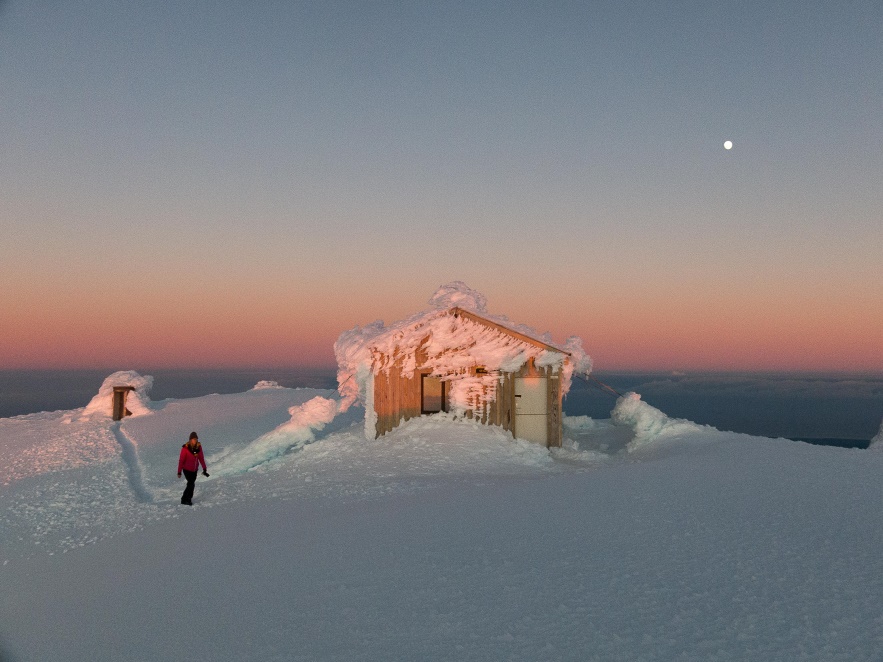