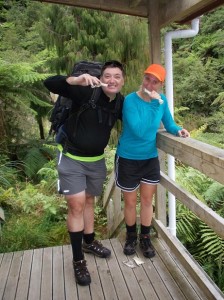 An endless summer holiday period  about to come to a close. Warmth and a lack of precipitation forecast. The remaining question was where to take a full van of EM punters. Our trip was originally scheduled for Waitaewaewae, but Sarah, Rachel, Dan & I had tramped that route recently due to route adjustment when trips sharing transport to Taranaki were cancelled. New turf was certainly called for and our intrepid trip leader, Sarah, eventually settled on taking us up the Ohau River to South Ohau Hut. This worked well since Sarah, Rachel & Dan hadn’t bagged the hut, and I was yet to bag a night on the South Ohau porch. 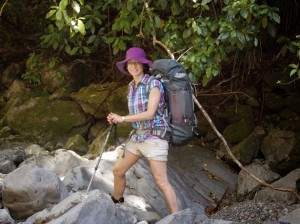 On a stifling hot day, the flat, and water cooled terrain was ideal. We had a large party of 10, of which half were on their first tramp with WTMC. Walking in a river was not only new experience for them, but as the tramp continued, it highlighted the expectations differences that can exist in relation to established club members and new punters from non-tramping backgrounds. 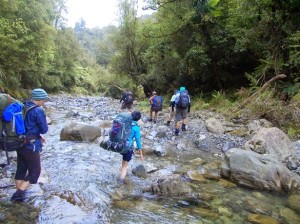 Although some of the group experienced a few trips (and dunks) heading up river, spirits were high as we wombled our way up the Ohau with frequent regatherings to keep our mixed pace party together. Regardless of a generous lunch break, as the afternoon drew on, the morale and enthusiasm began to wane.

Typical WTMC jet plane bribery ensued and sleeping bags,  clothes and bottled mineral water was redistributed to lighten loads of struggling punters and ensure we all made it all the way to South Ohau.

Tramping deeper into the Ohau Gorge, a number of self-declared edicts were made:
“This is too hard”, “this isn’t an easy-medium trip” and “we cannot go any further.”
I was uncertain as to whether this was from larger boulders in the gorge (as I was told), or due to some tiredness setting in. We were now about 2.2km from our destination, or 8km from the van. Half the group were further up river and almost at the South Ohau Hut. Following a brief rest, some gentle encouragement and occasional GPS distance countdowns for motivation we were all in fact able to go further, and by our successful arrival at South Ohau proved that it was not actually “too hard”. 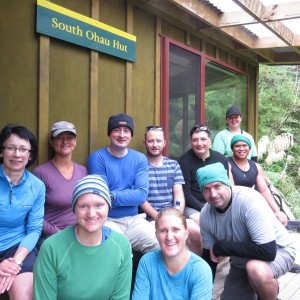 While preparing dinner there was some conflicting interpretation of specified ingredients leading to some mystery alternatives in our shared meal.  On this occasion, the difference between curry sauce & curry paste which was resolved by the surplus milk powder I had carried along.

Fed and nourished, it was a festive group for the evening with a campfire raging and a quick game of bananagrams. With our punters distracted by the campfire, Sarah and I had the chance to look over the map more than once or twice.  We knew the perception of the group was the track would be easier than the river. However,  the contours on the map disagreed. With a re-assessment of travel time heuristics based on the observed speed of our party it was obvious that exiting via our planned route up the Yeats and over Butcher Knob had a likelihood of becoming a very long and tiring day.  However, no need to mention a return via the river route until the morning right? 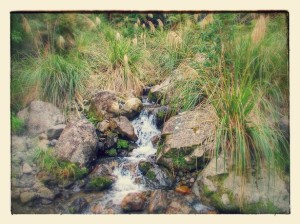 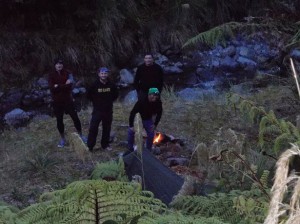 As the sun disappeared to the west, relatively few of our party elected to stay inside the hut. Naturally, I had promptly made myself comfortable on the porch while Dan, Euan, John, Elaine & Bianca camped or slept under the stars by the campfire.

Once over the decision to travel out down the river, we set off at a reasonable pace, including over the larger boulders that had caused discomfort for some the previous afternoon. This all made for a relaxing tramp down the river, aside from a brief trip head over heels and a dunk in the river of my own. This was much to Rachel’s amusement, while Sarah did her best to pretend not to laugh (I know the truth). Fortunately our punters were unsighted to my own lack of co-ordination as we proceeded down river while avoiding trampling over a Manuka Beetle that was hanging out in the middle of the river bank. The beetle ought to be careful as it’s a favoured delicacy of brown trout. 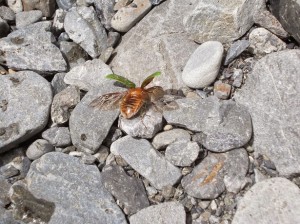 Although the previous night saw a few doubts from trip leader and punters alike, we all returned safely to the road-end a smidgen after lunch time. It was certainly a trip that led to much self-reflection on effective expectation setting and interpretation of fitness and difficulty levels. Such things are always subjective by nature with a tendency to match words like “easy”, “medium” and “fit” against your own fitness, skill and experience. Possibly amplified by our post-modern world of rapid electronic communications – rather than meeting face to face, these expectations gaps can be larger than imaginable when communicating with those that are not yet initiated in the good and righteous ways of the mighty Tongue & Meats.