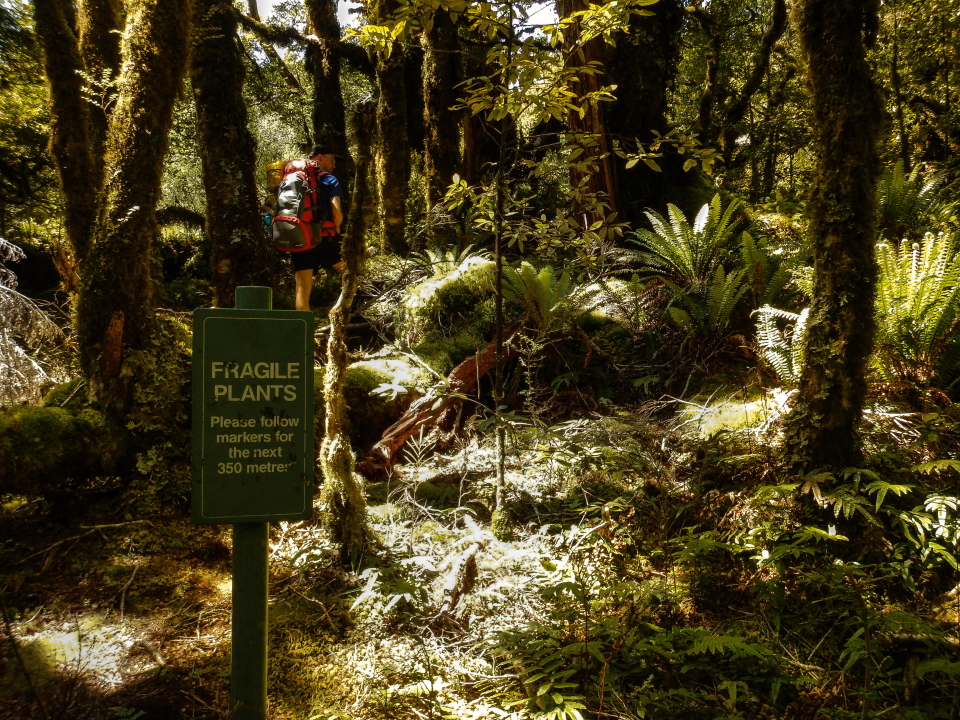 I had never been to Hutt Forks in the Tararua Forest Park so I was interested when I saw that this trip to Alpha Hut would go there on the way.  I didn’t know much about Quoin Ridge but it didn’t look too bad on the map.

Tash had to pull out of leading so I took over.  I warned the people who signed up that the Saturday would be a ‘solid medium’ day.  Despite this warning Fons and Adam agreed to come along.  I also pointed out to them that we would need extra water bottles as there were no water supplies marked on the map along Quoin Ridge.

We took a train to Upper Hutt then taxi to Kaitoke Regional Park and headed up the Norbet 4WD track and over to the Hutt River.  This is a pretty steep ascent and descent and with the baking hot sun of the hottest weekend of the summer we were soon sweating.

The Hutt River was very low and we reached Hutt Forks at late morning.  I had a quick dip in the river to cool off and we had an early lunch before facing Quoin Ridge.  We topped up our water bottles – we each carried 3-4 litres of water and we needed every drop as the day progressed.

Like most Tararua ridges the first few hundred metres of the climb was very steep.  There is a track marked on the map but it is more of a route.  In places dead tree-falls had completely obscured the route and we had to clamber up, over, around and through the tangle of wood, branches and leaves.  This clambering, along with the heat, was very energy sapping.

Quoin Ridge climbs steadily.  There are orange markers in places, a trail in places and in other places it is a matter of following the ridge line upwards.  There are numerous dead-falls to negotiate plus general overgrownness.  There are some beautiful trees and the bush is lovely but it was hard going.

As we ascended Quoin Ridge we came across a sign saying ‘Take Care.  Fragile Plants.  Please follow markers for the next 350m.’  Soon after this sign the bush turned to scrub and the orange markers completely disappeared.  The scrub was very sharp and scratchy and looked like South Island matagouri to me.  It scratched us in the same manner as matagouri as we pushed our way through the ‘fragile area.’  After what seemed like a long 350 m we emerged from the fragile zone into normal bush again but we were all a bit worse for wear.

I had never seen signs like this before and I think they may be old Wellington Regional Council signs.  The Regional Council protects the Hutt River catchment area so possibly there were interested in some of the vegetation as well.

We kept ascending.  Luckily we were in the shade of the bush for most of the way, but it was still really hot.  We were getting through our water supplies.  There are great views of the Tararua Range, Remutaka Hill and towards Wellington Harbour from Quoin Ridge.

Near the bushline we met a man and his dog who were heading down the ridge.  They had been for a day walk and said that a couple of other trampers were ahead of us.  I was surprised to see anyone on this ridge and to hear about others was even more surprising.  I asked him about possible campsites further up the ridge and he said there were flat areas on the tops.  I thought back to some other trips when we had to camp up high with limited water and was wondering if we would end up in this situation again.

I had been expecting the travel to be a bit easier once we emerged onto the tops.  Unfortunately, instead of the tussock I expected, there was more scrub.  Again this was difficult, energy sapping and slow to get through.  By this stage it was after 4 pm with overcast clouds so at least we were not in the beating sun.

We enjoyed the views and were still in good spirits.  However, we were getting tired and our water supplies were diminishing.  We passed some large puddles of muddy water but this would have to be strained and boiled before being safe to drink as there were animal prints around.

We kept going but by 5.30 pm or so we were hungry and flagging a bit.  The heat, long day, steady climb and rough terrain had worn us out.  I considered stopping and setting up camp but we decided to instead eat the dessert that Adam had brought along.  We soon got through over 1 kg of creamed rice and chocolate brownie.  This perked us up and we were able to climb the final 300 m to Alpha Peak in better spirits.  Although, having said this, I was a bit sick of climbing this interminable ridge by this stage and was glad to get to the top.

There were spectacular views to Renata Ridge, the Southern Crossing route, Marchant Ridge, Remutaka Hill and the Hutt Valley from Alpha.  It was well after 6 by this time and I was tempted to camp next to small muddy tarn.  However, there was no shelter and we would have been very exposed if the wind got up.  We pushed on for the final 1 km or so to Alpha Hut and arrived there about 7:40 pm.

Alpha Hut was pretty full and hot but had plenty of water in the tank so we could re-hydrate.  We spoke to the two trampers who were ahead of us and found they had also struggled on Quoin Ridge.  They had been a couple of hours ahead of us and had been on the tops while it was sunnier and were quite red from sunburn.

I checked back in the hut book and found that I had been at Alpha Hut I year and 1 day before this visit.  That time we had drizzly weather and there were only three of us in the hut.

Due to the heat in the hut and number of people we pushed on a short way and found a flattish area to camp.  We had been on the go for nearly 10 hours.  We set up our tents and had Fons signature dish of couscous, veges and chorizio.  It was a hot night and we slept with the tent doors open.

The weather on Sunday morning was also hot and as we had a long way to go we set of pretty early.  The steep down and up of Hells Gate was a bit of a shock first thing in the morning but we soon arrived at Omega where we descended to Tutuwai Hut.

From Tutuwai Hut we had an uneventful but fast and hot trip back to the YMCA camp at Marchant Road.  There is some lovely bush in places along the river valley track and the Tauherenikau River is beautiful.  As we were leaving the area a few people were heading into the hills for relaxing and fishing.

We didn’t make our scheduled taxi pick-up time of 4 pm despite our best efforts and going at a cracking pace.  There is cell-phone coverage from the top of the Puffer Saddle so I managed to speak with the taxi company to say we were running late.  For future taxi pick-ups I would call a taxi from Puffer Saddle rather than booking in advance.

This was an enjoyable but challenging tramp over new terrain in the Tararua Range.  It’s always good to get onto the tops and we had fantastic weather.  Thanks to Fons and Adam for being such good sorts and not complaining about the route.