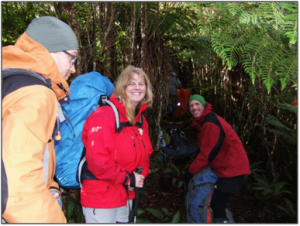 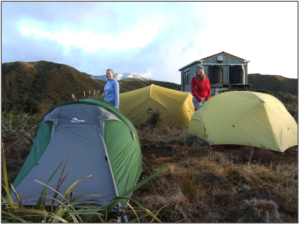 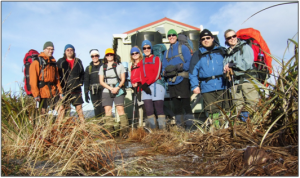 On a dreary Saturday morning we contemplated alternative routes as we made our way to Levin. A southerly was forecast and there was already snow on the coastal foothills of the Kapiti coast.

As we ascended the windy road to Mangahao Dam 2, the sunny calm weather convinced us to stick with our planned trip to Burn Hut, nestled in the tussock at 752m. The tramp started with a meandering, slightly slippery track through the bush above the river, with a few tricky clambers down and up from side creeks. It was a good warm up before we started the ascent up to a wee lookout and a quick lunch; the temperature seemed to drop a few degrees as we ate. After marvelling at a couple of rainbows over a parallel spur to the south we set off again.

Upwards on what I thought was the most user-friendly ‘access to Tararua tops’ track I’d had the pleasure of travelling. A steady ascent but not too arduous, a few steep tree-rooty climbs punctuated with heart-rate reducing micro-plateaus, and of course the changing flora confirming our upwards progress. Definitely an improvement on the track to Cone! As the group met up on a high knoll at 657m, the mild southerly showered us with some light sleet. Not long afterwards we were in the tussock, with expansive views to Kapiti and the sea and over the Wairarapa hills, with gently falling snow. As the track did a 90 degree turn we headed southwest, facing bigger peaks dusted in snow. Shortly afterwards we arrived at Burn Hut, in a sheltered spot in the tussock.

Since it was going to be a bit of a squeeze in the 8 bed hut, we pitched three tents in the cosy flattish space around the hut. 4pm and it was still calm so I was excited by the prospect of a sub-zero night in the tent in the tussock. I was glad Donna was willing to share her super-duper MSR hubba tent.

After the tents were pitched and the billy was on, Harry mentioned the hot pools nearby: vaguely in the saddle and down a bit but only about 10 minutes away. Mmm, maybe hot pools were too good to be true but since they weren’t too far away, a few of us went off to investigate. At the saddle, we found lots of leatherwood and no obvious hot pools super-highway. Hot pools at Burn Hut – yeah right!

As the night cooled down, we all congregated in the fireless-hut to keep warm and watch the awesome scarlet sunset. Anthony’s technology told us there had been hail for two hours in Wellington. Donna and Jenny cooked up a fabulous red curry with veges, coconut milk and tuna. Tim tams, muffins and ginger slice followed. It was crisp and clear outside, with the Milky Way vivid directly above us and the orange glow of town lights below us to the west.

We survived the calm sub-zero night which left a snow-like frost on the tents. Displaying her leader’s wisdom, Jenny suggested we wipe this frost off before the glorious sun melted it. The usual pfaffing and we set off in sun at 9am, along the tops to the highest point of 835m. Permafrost along the track to captivate us, Taranaki and Ruapehu volcanoes in stunning snowiness to the northwest and some enticing seriously snowy Tararua peaks visible further south.

But we were heading west and down a spur into College Creek for some river travel. We lunched in the sun when we hit the creek. After some river crossing instruction, we set off. Lots of sun, rock hopping, gravel walking, and criss-crossing the river. And then it got a bit narrower, darker, deeper, with wet rock bum slides and chimney clambering in a few places. We all popped out of the river and located the Puketurua track to follow for a while to the top of dam 1. And then we lost the track so half the party went in different directions looking for it, or big orange triangles. The rest of us stayed put as instructed, until Jenny returned to lead us along the found track, hoping we would bump into the rest of the track-finders. Fortunately we did. After another kilometre clambering and tramping in the bush above the dam, we were relieved to get to the dam wall and the Medium party’s van. We loaded in to the van and set off back to Wellington, doing a van shuttle to pick up the Mediums.

In essence, a fantastic E-M Tararua tramp with variety of terrain and scenery, great company and compliant weather.