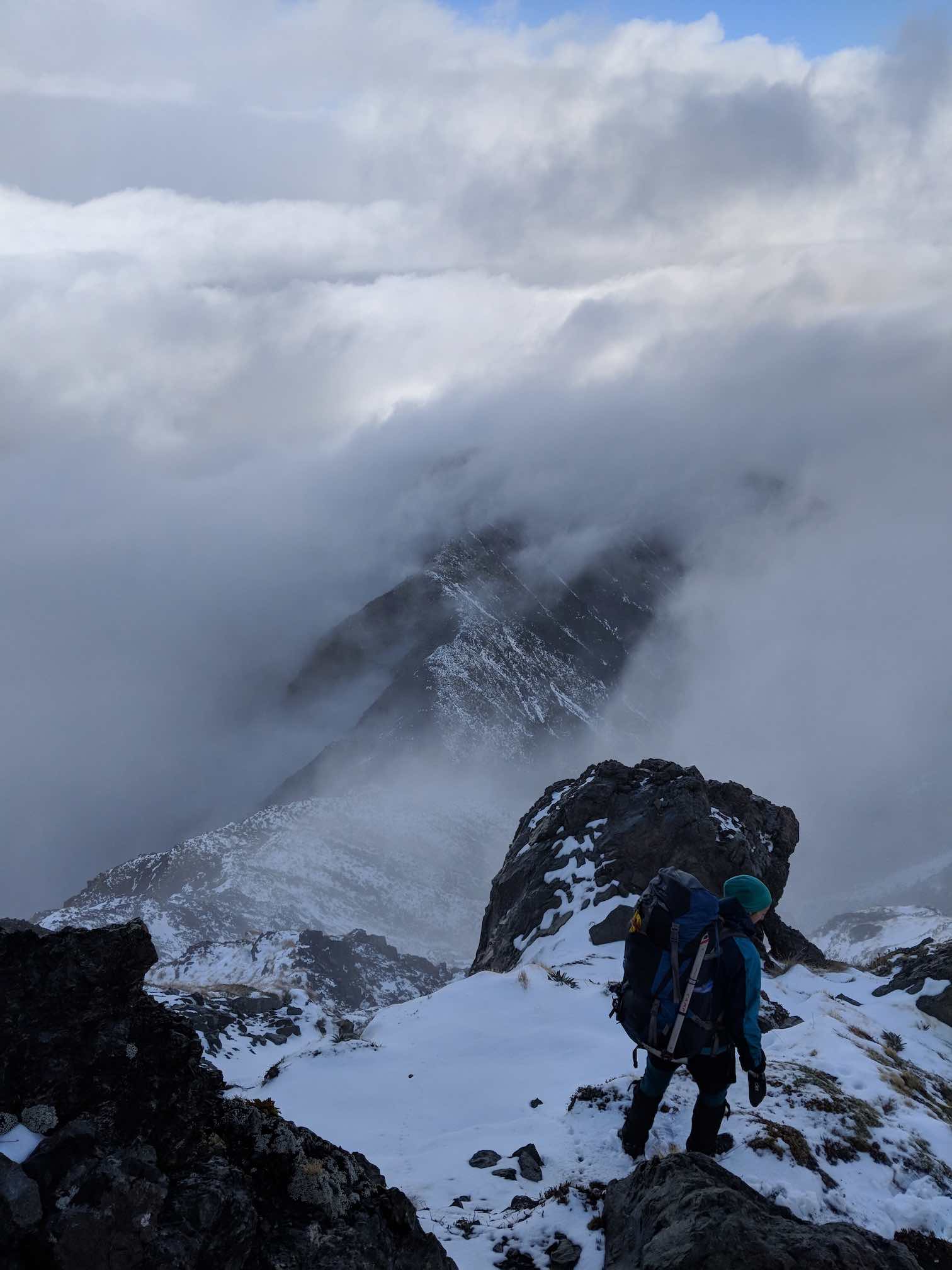 This time last year, almost to the day, I stood on the summit of Mt Tapuae-o-Uenuku, and one of the few prominent sights staring back was the peak of one of its tallest partners Mt Manakau, the highest point in the Seaward Kaikouras. I resolved that next year I’d try to tackle it on the anniversary.

Fast forward 12 months, and I’m standing at 1500m up the Surveyor Spur with four sets of uncertain eyes, reflecting exactly the same thoughts going through my head. There wouldn’t be a summit on this outing.

The plan was to attempt the traverse of Mt Manakau over to Uwerau, descending down to the Hapuku Hut and out over 3 days. We left Wellington on the Friday lunchtime sailing, arriving at Grange Road just before 8:30pm. The river crossings were much fewer than the Hodder valley, but arguably more technical. Post quake, the river is quite concentrated on one path so the crossings, whilst not more than knee to waist height, were quite rocky and the flow quite strong.

We did some rather awkward bush bashing to find a small little meadow under the trees about 2.5km up the valley, where we made camp for the night. At 7.15am we were off and it wasn’t long before the monstrous sight of Manakau presented itself, the thin early season snow making it look truly Himalayan.

A few more river crossings took us to the gorge, where sure enough the trusty orange DOC arrow led the way up the true right of the river bank. Only unlike the pictures of many trips reports before us, there is no longer any boulder climbing required, it’s a simple scramble up some scree to the first of many small slips through a pretty straightforward forest trail. Megan was shocked to see the area, having been the only person in our group to come through here pre-quake. The DOC trail is largely as per the topo still, though don’t be alarmed if you are taken higher in elevation, as it does eventually lead you right down to the old trail along the river bank. There is a sign at this junction which also points to Hapuku Hut.

After one more river crossing we found ourselves at a very spacious camp site, right where the northern branch of the Hapuku Valley breaks off. The next 3.5km was a steady climb up pretty boring river bed and scree (and looks completely different to any photos from previous trip reports!) The sheer scale of land slips in these valleys is hard to describe, but given the amount of rock which was dislodged from the cliff faces, it wouldn’t surprise me if the river bed has risen by tens of metres since the quake. We only had a GPS altimeter so can’t confirm this. The route to the bend just before the old Barrett’s Biv is still very much intact and was pretty plain sailing. We arrived at the base of the scree climb to the top of Stace Saddle at around 11:30, some 4h15m after setting out from camp. Note that access to this spot is almost completely cut off by a 3-4m deep gorge cut into the scree from one of the river tributaries – the only apparent access point being tucked into the crumbling bank on the true right corner of the basin.

We finally had the chance here to take off our soaking approach shoes and swap for insulated trousers and boots. The climb to Stace Saddle was a bit of a slog, with a mix of awkward but easy enough terrain. Once on the saddle we stopped for lunch and had our first limited view of the spur. It was also here we got to look back and see the huge new lake which now sits on top of what used to be Barrett’s Biv. It was an incredible sight of fallen rock, the scale indescribable.

We made steady and strong progress up the spur, considering the pack weight we were carrying. However It wasn’t long before the terrain steepened and the snow got deeper. Being early season, it was very soft, too soft. Things got progressively harder and harder until I was going in up to my waist, every step a battle. A trip report on summitpost.org had suggested that there was a vertical section of grass at ~1490m, which I had not taken full note of. With hindsight it makes a lot of sense because we got sucked into it hook, line and sinker. It took some time and calm nerves to climb up this section head on, before we stopped for a breather and conversation turned to our next move. The forecast suggested the weather would deteriorate over the next 48 hours, and an update showed it was due 12 hours earlier than I had anticipated, making any (enjoyable) summit bid quite unlikely. We could continue on to the camp 500m up above us, and take a chance on the weather giving us a break. Everyone in the group was willing to give that a go, however doubt had crept in given the difficulty we’d encountered on the spur so far. We had to now consider how comfortable we would be retreating this way in the morning if the weather turned on us. In the end the decision came naturally, even though at that moment the skies were clearing and blue sky lured us onward. The group dynamic was clear and we knew that even if we’d had a lucky break, the descent the next day would not have been fun and could have been dangerous, whether it be back the way we came or down off Uwerau.

So we began a quick retreat, as we had only 3 hours of daylight left with almost 1000m to descend and ~6.5km distance to cover to get to the safety of the hut. After a few sections of enjoyable scree surfing and careful clambering we were back down to the river basin where we reluctantly swapped our warm boots for the soaking wet approach shoes again. We were soon beset by a thick mist which, coupled with the fading light, made the descent down to the Hapuku Valley quite foreboding. The regular sound of rocks dislodging from upon high and crashing down reminded us that this was not a stable environment, even 18 months after that huge earthquake.

The trail to Hapuku Hut is in average/good condition, with a couple of river crossings and a few large slips just before the hut. It was quite difficult to follow in the dark as some sections take you along the river’s edge where there are no markers. We eventually rolled into a cosy warm hut sometime after 6pm, 11 hours after setting off. A couple were already there and had had the fire going for some time. We had a very relaxed evening and a decent sleep in before waking up to increasingly heavy rain. We felt vindicated in our decision to abandon the summit attempt and leave a day early as the river crossings on the way out were much more challenging than just 24 hours before. We did this section much faster by daylight, arriving back at the car about 3 hours after leaving the hut. A quick call to Interislander secured us an earlier sailing and discussion quickly turned to the merits of our second attempt being a winter or summer one. I vote Winter… not sure I can wait until Summer! Watch this space.