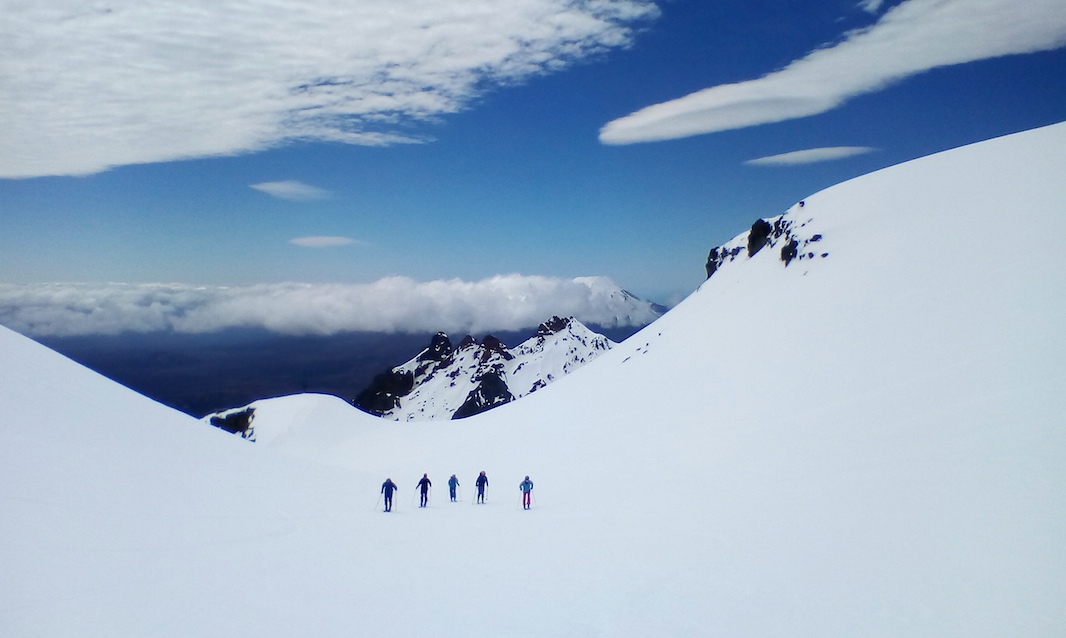 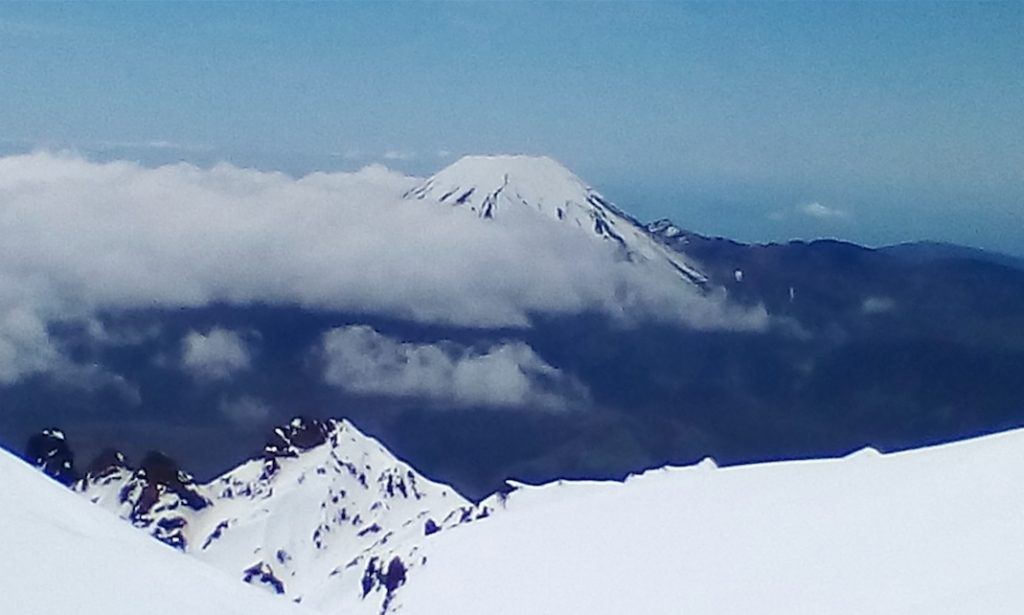 There’s a good reason why it’s been several years since the last ski touring trip was held at Ruapehu. That large volcano is a magnet for wind, rain and fog but this Labour Weekend, WTMC hit the jackpot.

Well, sort of. For one day, Simon, Tony, Jan, Brian, Emily, Graeme (leader) and I slapped on sunblock, stuck skins to the bottom of our skis and walked up Whakapapa under a dazzling sun.

Our group had a wide range of skiing prowess, ranging from extremely experienced Tony, Brian, Jan and Emily to barely able to ski without complaining of sore thighs (I’m a snowboarder who thought it would be easier to ski since everyone else was). But I wasn’t put off as Graeme assured me this trip was about giving people a chance to try ski touring.

Let me explain what ski touring/backcountry skiing is. It involves attaching adhesive material, called skins, to the underside of your skis. One side is sticky while the other side looks a little like carpet, which helps grip the skis to the slope. You adjust the ski bindings to walk mode and off you go. When you’re ready to ski downhill, you simply peel the skins off, adjust the bindings back to ski mode, and voilà, you are carving up fresh tracks far from crowds.

It all sounds great in principle. In reality, walking up hill on skis is rather hard work. I was puffing while stealing glances at the nearby chairlift wishing I was on it. It took me awhile to figure out that using your arms is key and leaning forward too far is not helpful. But it was rewarding to enjoy the view knowing you’d earned it and I was impressed that I didn’t slide downhill while on a 30 degree angle. It took us 1.5 hours to walk from the base of Whakapapa to Knoll Ridge Café. After a short lunch, we headed off the resort with a plan to visit the summit plateau and Mangaturuturu Glacier. 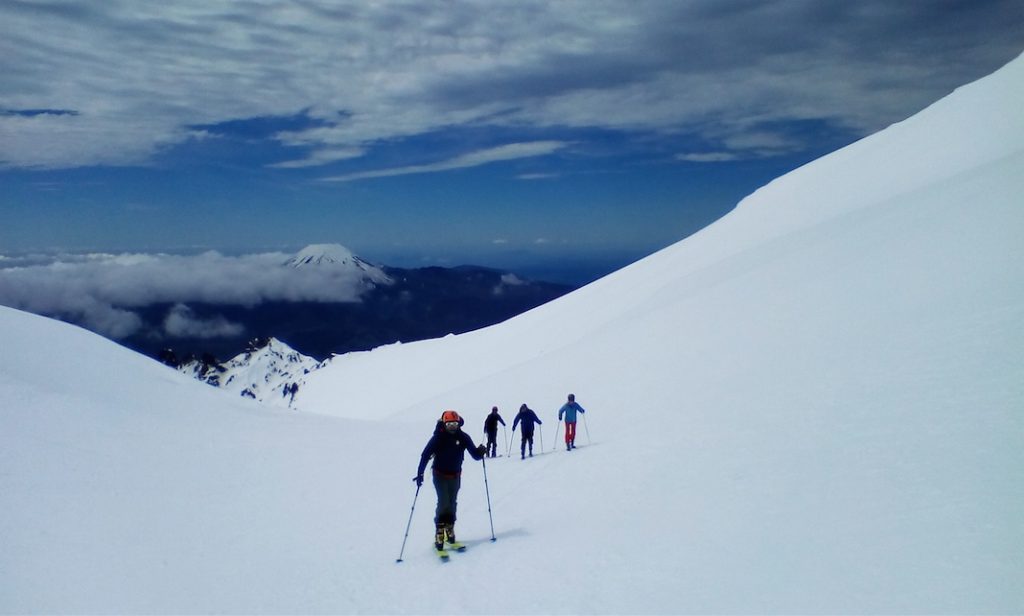 The snow was a bit crunchy as the terrain became steeper. We adjusted by traversing rather than going straight up. Emily looked strong leading the group; which was impressive considering this was her first time ski touring. Tony proved his extreme fitness after skiing downhill to retrieve his wandering glove and then powered ahead of me on his second ascent. Simon and I were tired; Simon decided to unclip from his problematic hired skis and walk up but I decided to turn back. Tony escorted me to a safe spot where I made my way (e.g. walked!) back to the less steep slopes of the resort and enjoyed skiing slowly to the café. 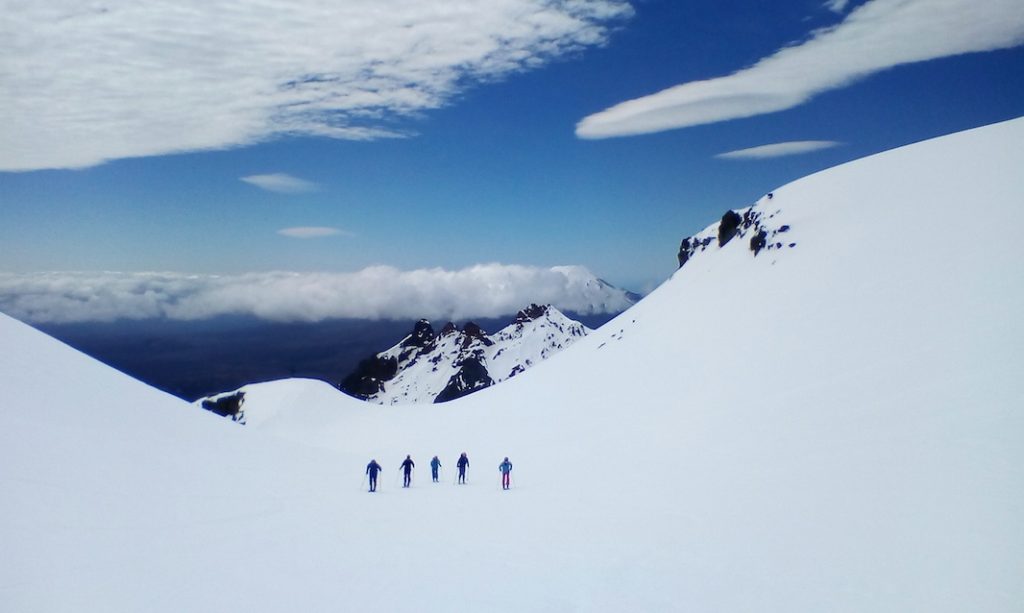 The others carried on for about half an hour before aborting their mission. The snow was becoming too icy for good skiing and in true Ruapehu style, the wind had picked up and low cloud reduced visibility. But the group was rewarded with a long ride down to the base, except Simon, who walked down the steep slope before taking the chairlift home. Despite our tired states, Simon and I were happy we’d been able to walk up so far (him and the rest of the group walked nearly 750m vertical) and tick ski touring off our to-do list. It was an honour to be taught by seniors of our club who showed a lot of skill, patience and enthusiasm. 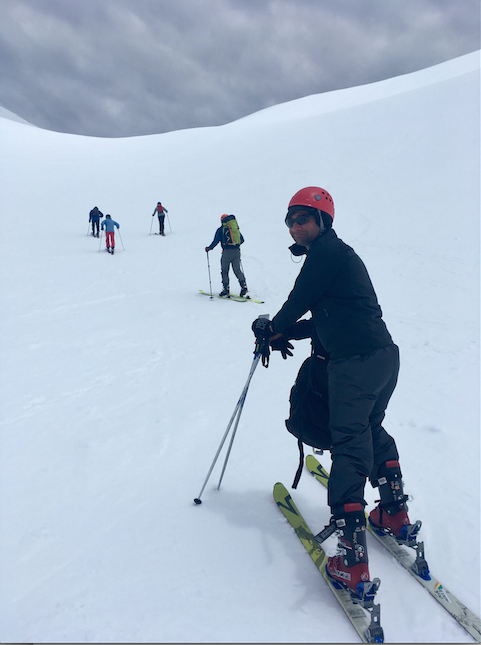 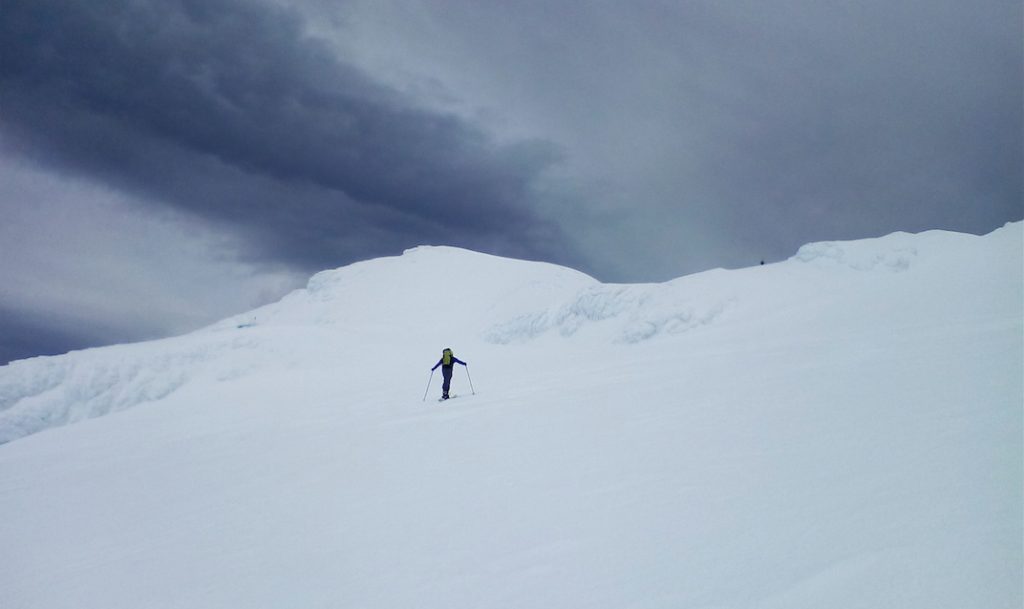 It was now time to relax in our digs at the base of Whakapapa, the WTMC lodge. This was my first visit here and I highly recommend staying here. The lodge has a dry room (which actually dries your wet gear unlike some dry rooms), a ski repair area complete with tools, several bunk rooms, and a large lounge and kitchen. Did I mention showers and electricity? Yes, that’s right. The lodge sleeps around 40 and it was full for the long weekend. Everyone got on well and helped each other to prepare meals (food is included during winter season) and clean. We devoured a delicious dinner of roasted chicken and vegetables. After polishing off some liquid refreshments and a few games of S**t Happens (a new card game), we toddled off to bed hoping that the forecasted bad weather for Sunday wouldn’t eventuate.

It was therefore no surprise when we woke on Sunday to an invisible mountain. We could barely see a few lodges away from us. It wasn’t long before Whakapapa announced it wouldn’t open, and then Turoa shut at midday. Tony and Simon decided to cut their losses (Monday’s forecast was looking equally bad) and head back to Wellington.  The rest of us decided to relax in the lodge reading, eating, talking and then eating again. In the late afternoon, the skies cleared so Graeme, Emily and I drove to National Park Village to window shop and went for a walk near Happy Valley. We weren’t out for long when the skies opened and we got drenched.

Monday arrived with its predicted rain and mist. Turoa didn’t open and hours later, Whakapapa followed the same path. It was disappointing to only get in one day of skiing, but at least we had beautiful conditions for one day! Graeme is keen to run more ski touring trips next year so I’d recommend those of you who are keen to sign up. It’s an incredible chance to hit the slopes with people who are very experienced. Tony mentioned that there aren’t many young skiers or snowboarders in the club unlike years gone by, so perhaps we could change this by also holding regular ski/board trips? Let’s keep our fingers crossed that next winter promises lots of snow so our club can hold more ski trips.