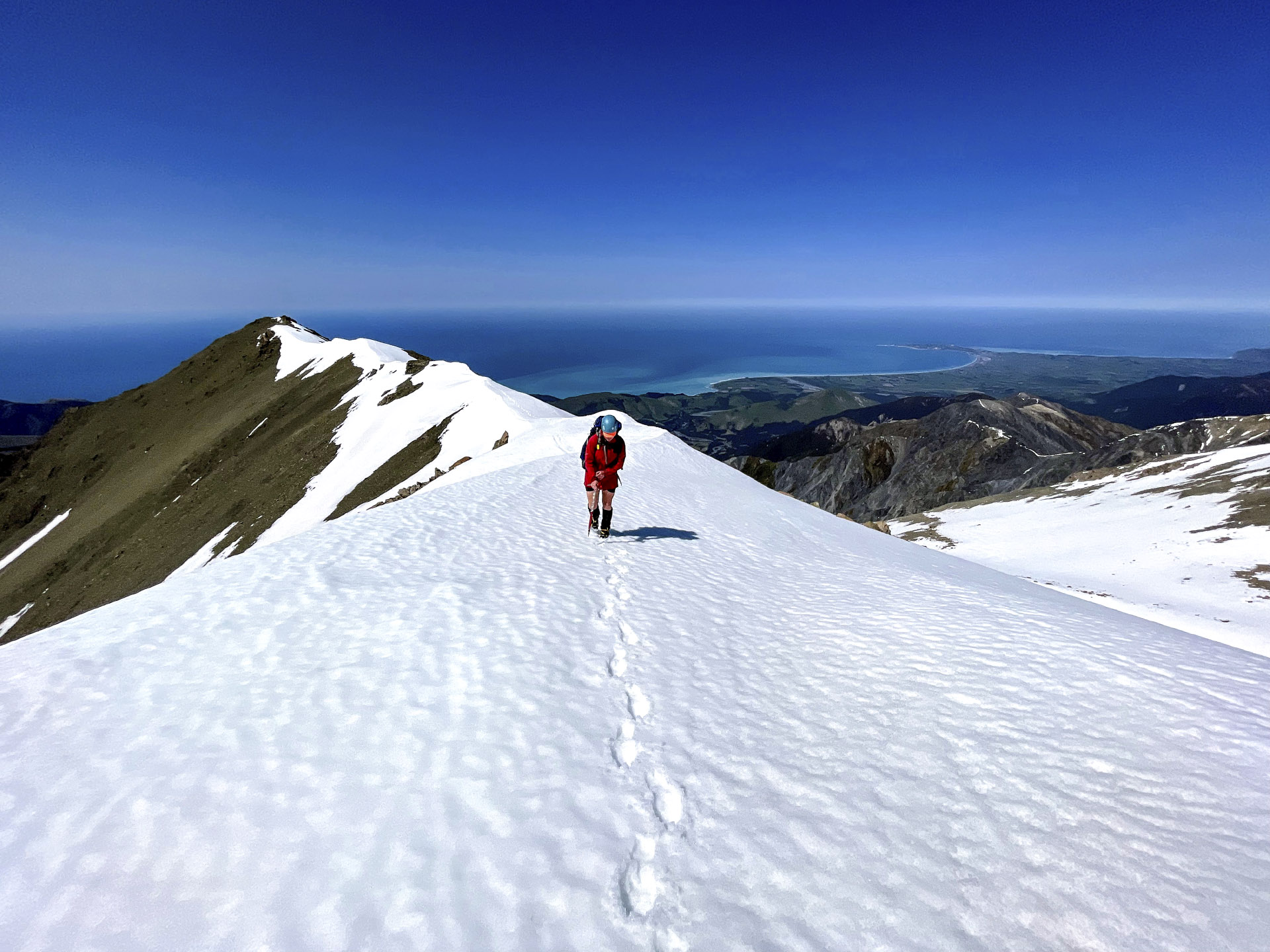 Much to my surprise I was now staring up at two noisy kea calling out in the trees above me on the scree slide above Jordan Stream. I had originally thought the noise had come from Tony finding a slightly different route to us because the thought of seeing kea in the Seaward Kaikoura Range never even crossed my mind.

I was on a week’s long trip in the Seaward Kaikoura Range with a group of friends from tramping club—Matt Conway, Tony Gazley, Megan Banks and Emily Shrosbree. We were attempting a climb of Te ao Whekere as our first trip for the week. The day before we had walked up Jordan Stream to our campsite named ‘Rubbish Bag’ campsite on a previous trip by Aimee (see here). I was really missing Aimee on this trip but she was unwell and stuck back in Wellington.

Our alarm clocks went off at 4 am and by 5:30 am we were already well on our way up Jordan Stream to the scree slide. To avoid climbing on the sliding scree for the entire way up we went through the bush for a while before jumping on the scree slope. Climbing up the slope was hard work as often we would slide back down a step or so but we were distracted by the magical sunrise over Kaikoura. Just as we headed over to the edge of the slide for a break, we heard the kea calls. A pair of kea were sitting on the trees watching us—I imagine they were having a nice laugh at us all. They stayed around for about 30 minutes watching over us since they had a captive audience.

With their cheeky calls echoing in our ears we started back up the scree slope and eventually reached the top—leaving a cairn so we wouldn’t miss our turn off and continue down to the farm at Totaranui by accident. We started traversing along the ridgeline which was initially easy walking but as we got higher we got among larger rocks that were all moveable.

It was at this point that our group had a discussion and three of the group decided they were content to turn back as they didn’t think they would make the turn-around time at the summit (more commonly known as mountain lassitude!) So Emily and I continued on fully aware we still had a long way to go. Luckily the moveable rock section finished shortly after we reached a flattish section on the ridge.

After another few climbs we finally reached the snow line at about 2,000 m and put crampons on to become happy dinosaurs. It was nice to finally have a break from walking up scree and walk along the snow! I was entertained by all the spiders scurrying across the snow on our way to the high camp basin.

It got a little more technical after this—we had rocks to sidle around or over as they weren’t all covered by snow and the wind started to pick up. There were a few more tricky sections where we really had to investigate a good way around or directly up the rocks.

The wind in our faces was pretty cold as we started on the final climb to the summit—we estimated the wind was probably around 40-50 km/hr. We eventually made it to the summit bang on 3 pm which had been our agreed turn-around time.

Standing at the top and seeing all the snowy mountain tops around us was fantastic. We could see Mt Alarm and Tappy—we waved hello to Jon’s club trip that was up Tappy that same weekend. I was incredibly fascinated by the contrast of the snowy mountains with the sea in the background.

At 2,590 m this was the highest peak I had climbed post snowcraft so many thanks to Henry, Tereza, James and Tiffany for all their teaching on this year’s club snowcraft course.

Emily and I had a chat about our descent and she asked me what the most important thing was to remember. My answer was ‘concentrate’ because we were only halfway done and still had to get back down safely—and we knew we had a couple of tricky sections to navigate around.

It was a relief to get through the tricky moveable rock section again and jump on the scree slide. Once on the scree slide we went zooming down. What had taken us a couple of hours to climb that morning was now a 15-minute descent! Darkness rolled in just as we hit the bottom of the scree slide. From here it was a short walk back to our campsite—we came around the corner to see Tony, Megan and Matt had lit a fire as a welcoming beacon to guide us home.

The next day it was an easy 2 hr walk back to the car yet I still managed to slip on some rocks and fall into the river and collapsed in a heap of giggles that I couldn’t pull myself up for a few minutes and Matt had to come help me while Tony looked on disappointed that he didn’t have his camera out to capture the moment.

During the drive out we stopped to take a photo of a Sarahsaurus sunning itself high up on a cliff face (photo here). I had found me some dinosaurs in the Kaikoura Ranges of all places!

Day 3: Walk out from Jordan Stream campsite (took a slightly different route back down the river from the way in)