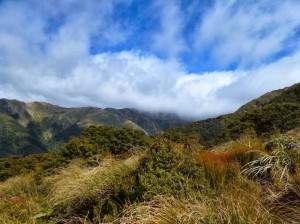 “The best laid schemes o’ mice an’ men gang aft agley.” And so they did. What was to be a three day trip to climb Tappy became a furtive dash in the Tararuas during marginal conditions between crappy weather and really crappy weather. The revised plan was to be a fast and light jaunt over Mt Baldy to Mt Holdsworth via the Broken Axe Pinnacles. A trip, Tony assured us that would take about nine hours, and a fairly easy nine hours at that.

We camped at the Holdsworth road end Saturday night, just managing to get the tents pitched before a heavy downpour and lightning storm barrelled in. An earlyish start was in order so we turned in shortly after dark. 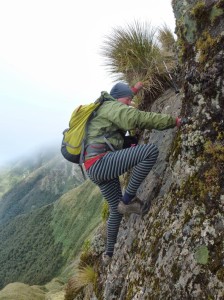 The new day dawned clear and after a hasty breakfast we departed up the Atiwhakatu valley on a track best described as lavishly groomed. It soon became apparent that there exists two discrete categories of time and distance estimators; the DOC employed Cassandra and the trip leading Pollyanna. The former would have us to believe their prophecy that a one and a half hour trip would take three, and the latter? More on that later.

We passed the new, and not yet opened, Atiwhakatu hut stopping for a brief watering and nose bags and then shortly thereafter began the slog up to Baldy. It quickly became apparent that we would not be having a crossing with long vistas and warming sunshine. Once we were on the tops it was apparent we would be three sheets to the wind with no liquor to blame.

Despite the wind gust induced zigzag of our travel we made good time to start of what would be the crux of the trip, the Broken Axe pinnacles. A beautiful series of formations that are mostly quite easily negotiated except for one which requires a slabby, and in these drizzly conditions, greasy climb. The height of the slab is only two meters or so but with dire 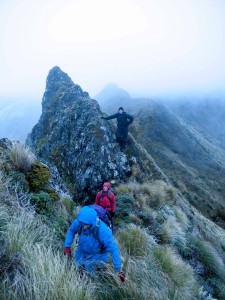 consequences should you fall not one to be sniffed at. The option of a sidle to avoid this was said to be as bad if not worse than the prospect of the slab. So over we went with varying styles that could’ve been variously described as calmly stoic (everyone else), or desperate and flailing (myself).

We stopped for lunch once we were past the pinnacles and were regaled by rounds of one-upmanship from Megan and Emily regarding who was the most malevolent when blood sugars were low. I recall it was never settled as to who was most despicable, but we were left with no doubt that, given enough time and not enough food, we would be in serious trouble. It was also observed at this time that Tony had an unerring tendency toward the optimistic side with his estimations of time to destination. It seems he uses calculations only seventy five percent representative of reality. A recalibration is in order or perhaps fitter companions! 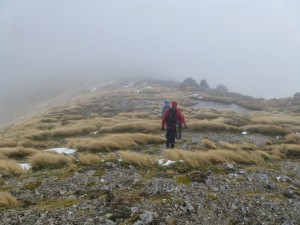 After lunch we went over Macgregor and then deciding the weather was really starting to pack it in, with rain and ever increasing wind-speed, we descended via Jumbo and stopped for another refuelling (all of us keen to keep Megan and Emily from becoming hypoglycaemic) at Jumbo hut. We gained the valley floor around ten and a half hours after leaving it and were back at the van in twelve.

It felt like a big day out and was very satisfying to have done the traverse of the pinnacles, a trip Tony assures us is not done that often. 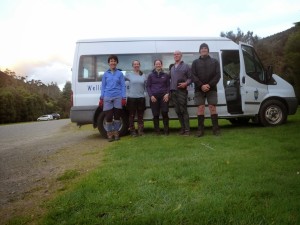