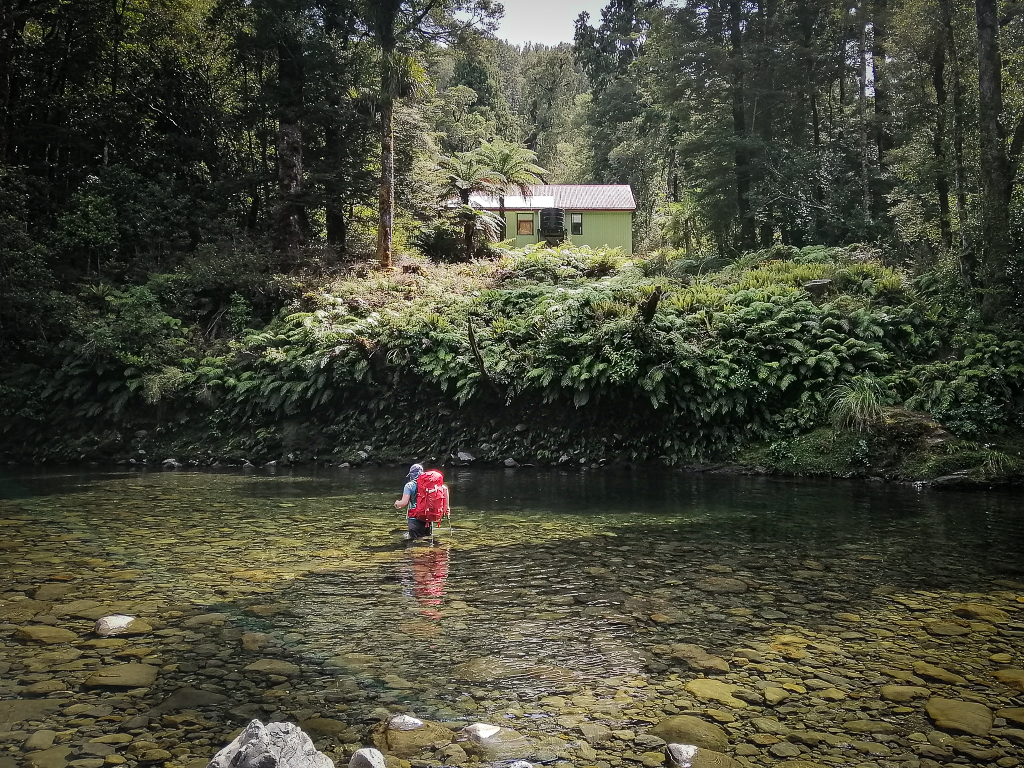 It didn’t take long for me to realize, on my second weekend back in Wellington, that I did not have the fitness to tackle the Mid-Otaki trip I had put on the schedule. Emily wisely suggested Island Forks instead, and I adopted the idea as my own.

We had a romantic drive from Wellington to Otaki Forks on the Friday night (it being the 14th of February, I was rather flattered Emily had chosen to spend it with me). Our intention had been to walk a bit of the Waitewaewae track and camp at the Plateau. However, after some unexpected traffic, a pizza stop, and a toilet paper stop (due to my forgetting this important item), we did not arrive at the Forks until 9 pm. The idea of a 3-hour slog and setting up tent at midnight suddenly didn’t seem so appealing, so we bailed to the comfort of the empty Parawai Lodge.

A 7am start meant we could make up the time we had given away on the Friday evening. Emily kindly plodded along at my pace, especially up the hills, where I really felt the effects of a month sitting on my bum on a boat. However, I cheered up immensely once the hills were over, and we had the excitement of taking the river route from the sign-posted junction to the Waitewaewae Hut. This was something I had never done in my previous five times on the track, due to the river being too high. The track is obvious, but there are two or three points where you hop in and criss-cross the creek. It leads out into the broad and rocky-banked Otaki River, which we followed around the hairpin bend to the hut.

Crossing to the hut to sign the log book was the next challenge. The pool right in front of the hut happened to be chest or more deep. While Emily industriously looked for a way across, I unhelpfully sat on the opposing riverbank and giggled. We decided to walk about 20-30 meters further up, where the crossing meant we could keep our feet on the riverbed. We climbed up to the track and arrived at the hut at 12 pm on the dot, ready for a well-deserved, if rather wet, lunch.

At 12.30pm we headed off up the track and over the swing bridge. Scooting down to the junction from the track about 20 meters from the swing bridge, we found ourselves again in a very wide open area of Otaki River. Following our nose up river we found the obvious forks, and took the left branch (looking upstream) into the Waitewaewae River. It was interesting for me see that the river was much lower than the two previous times I have been at the forks.

The travel up the river was very pleasant. There are extensive grassy river banks in the first two hours of travel which are good for camping. Emily with her eagle eyes spotted deer, a goat and a big eel. We arrived at Island Forks Hut just after 3 pm. The hut is a little two bunker, easily spotted from the river (especially given it has a picnic table on the river bank). There is camping on the river bank and a surprisingly good loo. Emily and I eagerly explored the log book. To my delight it was filled with familiar names from the club, including Megan S and Illona who had been there two weeks before. I decided that this was an unofficial WTMC hut, given the number of club members who had visited. We noted the various routes people had tried getting there, including some who had managed to get there over Mick, notably up the West Waitewaewae River and Point 828 middle spur, either taking Thompson or the Mick Track out.

We have a leisurely break in the sun and then started ambling back down the river.  Without communicating, Emily and I had both mentally fixed on the same campspot for the night—a place where we had spotted deer earlier. After about 1¾ hours walking, we were pitching our tent at that spot and enjoying some miso soup and our dehy meal from the club recipe book. We had a very still night and slept well.

The next morning we were packed up and leaving at 7.50 am. The remaining part of the journey in the river was equally pleasant. This time we stuck to the river passing under the swingbridge, rather than going up and onto the track to Waitewaewae Hut. We observed an owner trying to coax his reluctant doggo across the swingbridge, which greatly amused me. Then it was his turn to be amused as we had to cross our deepest pool yet, with toes coming off the ground for tow or three strokes!

The fun was over by approximately 9.30 am when we got back on the main track. Again Emily was very patient as I slogged along slowly. We arrived back at the carpark at 1.45 pm, to a surprisingly busy little campground. People were swimming, having a barbeque and playing cricket. After another dip (fully clothed!) in the Otaki River to rinse ourselves clean, it was homeward bound.

Very satisfying to bag the Island Forks Hut, which has eluded me twice before, and to do it in such pleasant conditions with great company.