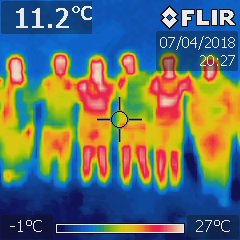 For the tramping with science trip we wandered into Mitre Flats observing stuff on the way – such as rainbows disappearing when you wear polaroid sunglasses (a rainbow was obligingly at hand), the changing clouds in the sky and what it meant, the surface trace of the Wellington Fault, holes in putaputaweta trunks made by puriri moth larvae which then become home for wetas, and much more. Then at the flats we walked part way up the track to Mitre and estimated our altitude from the boiling temperature of water, checked out the pyrolysis of wood when lighting a fire (and considered the toxicity of gases produced when burning plastic bags), considered wind-chill and how to calculate it and what it means for hypothermia and frostbite, compared the efficiency of gas and liquid fuel for cooking, checked if aluminium foil survival blankets do keep you warm from internal reflection of heat, and at night learned how to use the star constellations for navigation, and then set some inked and baited tracking tunnels to record the footprints of the beasties that lurk around outside your tent in the dark. We also used a thermal imaging camera to determine the amount of warmth that leaks through the various clothing that trampers wear.

The infra-red photo below taken on the cool Saturday night outside the hut at 8:30 pm in complete darkness shows the temperature of the ground surface as minus 1OC, and the trampers’ skin temperature at about 27OC. The models were wearing different clothing – from bare skin to long trousers and a reasonably expensive jacket. No-one was wearing a hat.

What the photo clearly highlights are the areas where body heat is being lost – principally from uncovered heads and bare legs but also through clothing at seams and zips (the areas shown as the highest temperatures in the photos are losing the greatest amount of heat). Note that the highest heat lost through clothing was at armpits and groin – the areas with normally the highest skin temperatures and where you instinctively put your cold hands to warm them. The trampers 3rd and 5th from photo-left were wearing only a light single layer top and clearly they may almost not have bothered – they are losing almost as much heat as from bare legs. The person on the right has a good quality jacket but it is leaking some heat from seams in the arms.

The person below also has a jacket that clearly is losing significant heat through multiple seams and the zip. They have the hood drawn tightly so are not losing much heat through their head and even with bare legs they are significantly better off than those in the photo above. 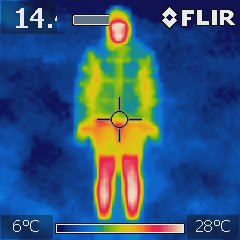 The photo below shows the top third of a person lying on their back in a sleeping bag. 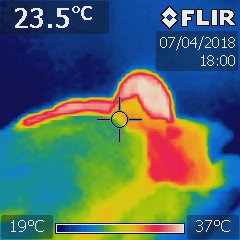 They are losing warmth mainly from their face but their sleeping bag is leaking badly around the shoulders area where the down has shifted to other areas just through general use. Clearly the bag needs the down moved back to be more evenly distributed, but the photo also shows the zip is not well designed and leaking some heat. Additionally the photo shows that to keep warm on a cold night you need to pull the drawcord tightly around your head to cover as much of your face as possible and limit all that heat escaping as shown in the photo.

We took heaps of other photos, recorded many data from our experiments and it will all be written up for the WTMC Annual Journal. Thanks to Kate Cushing for coming up with the idea and to everyone who made it a really good fun tramping trip with a difference.

3 thoughts on “Tramping with Science at Mitre Flats”