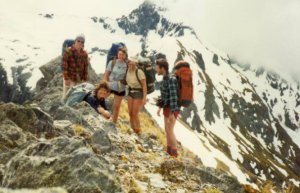 By llona Keenan and Megan Banks

Jane started tramping when she was eleven, after being invited by her friend Dianne Tipene’s family to do the Milford Track.  She must have been hooked, as a couple of days after finishing the Milford, she did the Hollyford.  Many adventures followed, including in 1984 when her Dunedin flatmates undertook a trip into the Young Wilkin. (see photo: Gillespie Pass).  Soon after this photo the rain set in, being stuck on the wrong side of the Makarora River the flatmates flagged down a passing helicopter and were subsequently rescued by a jet boat.

After tramping with a number of special friends throughout the eighties and nineties, including kayaking and cycling in Nepal, Fox River adventures, sailing to the Cook Islands, alpine courses in the Southern Alps, trips to the Kawekas, Ruahines and Tararuas, Jane joined the Wellington Tramping and Mountaineering club in about 2000. 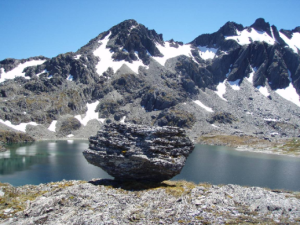 Jane was an encourager, teacher and great instigator.  Before I became a member of WTMC, Jane would look at the club night schedules and invite me along to interesting talks, encouraging me to hear about ice climbing adventures and epic Himalayan cycle tours.  Then when we were out tramping, we would meet other people in the hills, and Jane would say “they are a member of Club”.  Jane would talk about places such as 1000 acres, and mention there was a club trip going – encouraging me to sign up for my first club trip.  Later further club trips followed thanks to more Jane encouragement.  On these trips I would see her having entertaining in-depth conversations with the likes of Alistair Young, usually about different dietary preferences (carnivore versus vegetarian), films or something more philosophical.

As a Documentary Maker, Jane ensured that our trips together were well photographed.  After returning, Jane would always provide other trip participants with an envelope of photos, with the place and date written on them.  These packages serve as a wonderful reminder of epic adventures and something I will always treasure.  Jane’s artistic expertise was obvious in the composition and subjects of her photos. 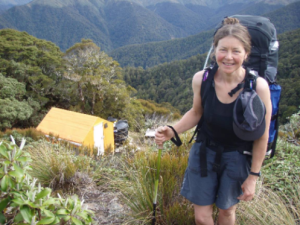 She was also inspiring by writing about her adventures, in December 2007 she wrote:

“We climbed up to Mt Holdsworth and got spectacular views. Several bumps later (and a lot of sweat on my part) we were at Jumbo peak, then Angle Knob, then we started looking for the cairn to the track to McGreggor Biv, which was obvious in such great weather. The biv is very cute, nestled on the bush edge.

I was so pleased to go there as it opened up views of Dorset ridge hut and Nicholls hut across the valley, and the route to Carkeek hut. Plus I could see the twins behind Waiopehu hut, and Te Matawai and Arete, and pretty much everywhere! Illona and I had been up on Arete in a white out at Labour weekend in October, so it was good to see where we were.” 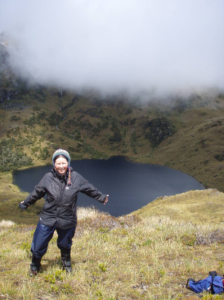 Talking to other tramping friends of Jane’s, one thing that we all noticed was the large size of her pack.  The aim of reducing this load, led to “small pack” people being asked to show and tell the contents of their small packs in the huts at night.  Spreadsheets of tramping gear weights were emailed around.  There were phone calls the night before trips, about what could be left behind.  Unfortunately Jane was very good at justifying the presence of everything that was in her pack, meaning that reducing her pack weight was a rather difficult task.

Jane had many many friends, and a lot of those friends were people she met in the hills, either on Club or private trips.  She was very good at keeping in contact with people she had met on trips.  Her encouragement to go tramping and her enthusiasm when she was out there is something that I will cherish and remember for the rest of my life.