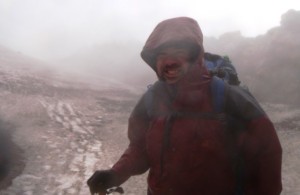 Clubs like ours are only as strong and vibrant as their members, particularly those who team up to run the show. Yep that would be the committee. We are very lucky to have a strong, hard working committee that is lead by our President Darren Hammond. After two years at the helm Darren plans to step down next year and head up north. We will need someone to fill his tramping boots.

On the surface the role of President sounds glamorous but Aunty Rata suspects that members only sit up and take notice if stuff goes wrong. The experience could be a bit like a trip to the Tararuas – you brace yourself for inclement weather while enduring lots of complaints from the punters about the leatherwood, steep hills and lack of views. Still you keep an eye out for the silver linings amongst the clag. Maybe finding a cosy hut with a nice fireplace for your party or soaking up one of those rare hot sunny days when everything falls into place. So how bad is it really? In the interests of ensuring any successor to Dazza knows a bit about the good and the bad, and that the rest of us get a bit of an insight into what the Prez actually does, I decided to find out.

How did you get into tramping?

I went tramping a couple of times with my family as a teenager, and pretty much hated it. Later in life, when I had had enough of mountain-biking (it was getting too hard to get fit enough to ride up the hills, and I was too scared of falling off on downhills), I was looking for something active in the outdoors, and my friends Paul and Wendy brought me along to a club night, when they were doing a slideshow. I signed up for a daywalk, then did an overnight to Totara Flats (with John Harrison leading), and the rest is history. Next trip was to Nelson Lakes (with John Hickey leading), it is still one of my most memorable trips to this day!.

What were your first impressions of WTMC?

I remember being on the club bus that first trip to Holdsworth road end (the bus was impressive itself), with all these super fit people with cool gear, who put on their packs and head torches and walked off into the cold night, then came striding back 2 days later not even looking tired, when I was shattered. I was pretty impressed. WTMC has always had a wide range of interesting and unique people, and that will continue I think. I remember that Club nights were pretty daunting the first few times, I don’t think that has changed for newbies, but once you get to know a few people, it is fine.

What do you consider your main achievements as President?

It was really good to get the second van, and I’m very pleased we got the PLBs. We had to battle a bit against some opposition that I really didn’t understand, but it was the right thing to do. This year I felt more comfortable as President, so felt better placed to advocate on behalf of the club, writing a submission against the Schedule 4 changes, and getting exemptions to the Kahurangi by-laws. I’ve got a lot of satisfaction from doing those. But when I started, I just wanted to see people out on trips having fun, if that is still the case, then I’m happy about that.

What aspects of the job have you found the most rewarding?

I have got great pleasure from seeing someone I helped recruit to committee doing a great job in their area. Or seeing a new member who I encouraged, starting to lead trips and enjoying it. On a simple level, just watching the crowd gather on a Wednesday night, and hearing the hum of the crowd gives me a sense of satisfaction that the club is going well. And I always get a buzz out of representing the club at meetings and events, it reminds me that I’m representing a well-known and respected club with over 60 years of history behind it.

What aspects of the job have caused you the most grief?

That is easy to answer, dealing with people dramas. That is to be expected when dealing with a group of strong-willed individuals, but it is a challenge at times. It is a frustrating position in the respect that you get virtually no thanks or credit for doing the job (apart from at the AGM maybe), so you have to do it for your own reasons. And even though I constantly ask for feedback from the members on what they’d like to see being done, I don’t get anything back at all. So I have no idea if people are happy with things or not. I’d like to know either way…

What have you learnt from your experience of being Prez?

I have certainly learnt a lot about how to deal with people. Also, that it’s better to deal with issues as they come up, and not to dwell on things too much. I’ve been pleasantly surprised about what I could actually achieve with my time, when I got focussed on the issues at hand.

What are the top three attributes you reckon a successful President needs to have?

You need to be well-organised, and have a sympathetic (or ignorant) employer and a sympathetic partner ☺. Good communication skills are a must, as well as diplomacy. Finally, knowing when to stick to your guns on an issue, and when to be willing to give way. That’s more than 3, but they are all important, so I will leave them all in…

Do you have any advice for anyone contemplating getting themselves nominated for the office of President, or any other Committee role?

In terms of making sure you know what you’re getting into, talk to the person currently in the role, and get an honest assessment of the pros and cons of the role. Only that person can give you an idea of what it is really like. But basically, just do it! (get someone to nominate you).

Do you think that generally Club Members help out enough or are a few people doing the bulk of the work?

Generally members do help out when asked, but there are some people, especially on committee, who do so much, even beyond their demanding committee roles, that as President I get nervous about people burning out, and dropping out of the club. There are things like; leading trips, being weekend contact person, writing newsletter and journal articles, doing slideshows at clubs, where I’d like to see members more involved and committee members less involved.

What, in your opinion sets WTMC apart from rival tramping clubs?

I actually find that very hard to answer as I’ve only ever been involved with WTMC. I’m sure most clubs have similar issues to us, and have some great people who put in a lot of personal time to make things happen too.

What are the challenges facing WTMC over the next 2-5 years?

I think there is a risk that we will get to a point where there are not enough people helping out to lead trips, do slideshows, write articles etc, that we have to cut back our activities in those areas, which would be a shame, and have a trickle-on effect. We’re probably not seeing the growth in new members that I’d really like to see, so that we get fresh faces coming along to replace those moving on, that is a challenge for the club in the next year or so.

You are going to be shifting to Auckland, what will you miss the most about Wellington (apart from the black ice on the roads in Winter…)?

I’ve been here for about 17 years, so there are a lot of people I know here, I’ll miss them the most. But I’m excited about moving to Auckland, and starting a new chapter of my life with Sandra. I’m looking forward to some better weather up there…