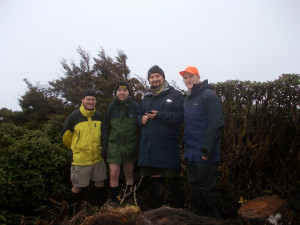 An important takeaway was quickly realised – my venerable Mazda Millenia sedan, which was the surrogate club van for the weekend, can only hold four backpacks.  Three in the boot and one in the middle of the back seat.  Just as well we had a late cancellation and proceeded on the trip with four trampers instead of five!  A quick change of plans at the Orongorongo carpark meant that we were to go up McKerrow on Saturday and leave our summit bid of Mt Matthews until Sunday, when better weather had been promised (cough).

The climb up McKerrow is exactly as I remember it, a pleasant stroll, followed by a short slog, up to a 15m stretch of mindblowing views of Wellington and the harbour.  The way down was quite quick and we ended up at Paua Hut at around 2pm.  I was quite impressed with Paua Hut, and my fears of being monoxidised by the woodburner were allayed when the smoke cleared and the warmth took its place.

Pizza for dinner at Paua Hut. Impossible you say? As we wound our way over McKerrow on a blustery Saturday, talk turned to dinner. Our trip leader had opted for a vegetarian dinner; yet there were no vegetarians in the party. This was to be a hot topic of discussion over the coming hours. We soon realised that we had all the makings of pizza in our packs. But how to make it at Paua Hut? Dinner was well received once it was on the table, a vegetable gumbo with chickpeas. We got to see other parties’ dinners in progress too; the mediums’ Tex Mex affair, and the rather intrepid private trip of ‘survivalists’  (Mike Gilbert & some work mates) by the campfire. Their menu seemed to consist of meat, with a little more meat. What’s for breakfast? Umm, Bacon? The campfire was a great spot to be, under a beautiful starlit sky. 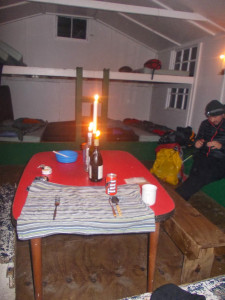 An alpine start of 6:30 was sounded with a cellphone alarm to make way for our summit bid. Some 2 hours earlier the hut was rattled by some showery squalls (which some confused for plagues of ravenous rats scratching at the hut walls and roof), but these had mostly cleared by morning.  We were out by 7:40ish and making our way up the river bed through chilly drizzle.  I showed the team my (no longer?) secret campsite in the Orongorongos and we continued up the river bed for the sidestream wash that signalled the start of the Mt Matthews track. We wisely dropped our packs at the bottom of the track (except for the trip leader taking one for the team), rather than the South Saddle.  The track was a vertical slog up stone and root steps.  The track was more like the Tararuas and less like the Orongorongos.  A steep stretch would flatten out, until Derek would inform us of a yet steeper bit that he could see in the distance.  The weather got colder and more misty as we went up the mountain, but at least there were no galeforce winds like the previous day. Towards the top the track began to level out and my camera’s highly fallible built-in barometer informed us that we were at ~890m.  After about 15 minutes the track abruptly ended around some freshly chainsawed beech.  Was this the summit? No marker, no pole no anything, and the track appeared to descend for about 2m into a dense patch of leatherwood.  I pulled out my phone and called up my backcountry GPS app.  After five minutes freezing on the top while searching for GPS signal, my phone reluctantly confirmed that we were indeed at the end of the track, on top of Mt Matthews!

The descent proved to be a lot less worse than anticipated, with only minimal slippage. After a lunch break on the South Saddle, where we got some views of the South coast, we got down to see our packs safely hanging in the tree we had  them in.  Up and down in approximately 5 hours, a pretty good effort I think! 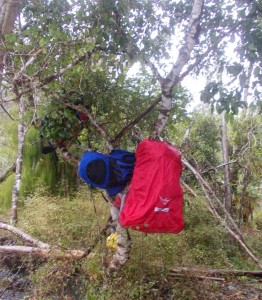 Sunday was to be a long day for those of us not so fit in the group. We meandered up the riverbed and checked out a campsite beyond Turere. Bound for Mt Matthews, we dumped packs at Matthews Stream. Superfit Sarah loaded up with the others’ day gear. This was to be one of the more vertical climbs around. We continued past South Saddle, opting to visit this on the return. At the top, with our location confirmed, I celebrated with a change of socks, and some good scoff. On the return, we stopped at a clear South Saddle for yet more scoff. Then a happy charge down the hill to collect our packs and begin the walk out down the river and along the 5 Mile track.

Big ups to Sarah for leading her first trip. She inspired and cajoled us up Mt Matthews, when I’m sure some of us would have opted for a more leisurely day. What a great weekend.

Derek’s snippets from the trip:

Sarah’s snippets from the Expedition and musings on trip leadership:

This was the first trip I led after some convincing from Chief Guide Mike that I was quite capable of leading a trip. It was a little more daunting by the fact that I had never tramped up Mt Matthews so didn’t have the previous experience of what to expect. However, I had run the Mukamuka Munter (a very fun but tough trail race) a couple of times so I knew the track up to South Saddle well. During the trip planning stage I sneakily added in Mt McKerrow after checking with my punters as just walking out from Paua Hut on Sunday seemed like a very short day.

During the walk down from Mt McKerrow there was great discussion over whether my punters would send me running back to the car to fetch some pizzas for them since I had made the decision to tramp in my much lighter trail running shoes rather than my tramping shoes. They also tried convincing me that serving scones for dessert was mandatory for new trip leaders. Unfortunately I couldn’t produce scones but I did pull out some marshmellows from my bag to be toasted on the fire which replaced the points I had lost of the trip leader scale when I had inadvertently made our dinner vegetarian…… 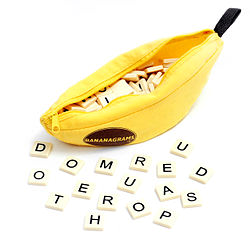 I made early Saturday evening interesting for the guys when I produced the game Bananagrams that I had recently acquired off Trademe. Unfortunately what the game didn’t come with was the instructions! I had just finished University exams the day before the trip so everything non-essential to passing my exams had completely flown out of my mind and I was left valiantly trying to remember the rules from when I had last played the game on my Easter trip. I didn’t do such a great job on this, and we proceeded to play Bananagrams according to the “Sarah Rules”  which made it much more challenging for us all.  Luckily, I had the club’s constitution on my side (cf Rule 31  Duties of members and some provision re attendance on trips (f) Leaders must have complete authority on trips subject only to the chief guide or his appointed deputy) so what I said went, apparently (thanks to my punters for very kindly reminding me of this rule).

The climb up to Mt Matthews involved me using some trampers spin I had recently learned like “it’s levelling off a bit here” or “it’s not so steep here.” The actual summit itself was anti-climatic as well as very cold so we didn’t hang around too long. A big well done must be said to Andrei, Derek and Richard for reaching the summit (especially during winter’s limited daylight hours and having done Mt McKerrow the day before)!

So all in all I think trip leadership consists of ensuring the punters all have a good time and having a healthy dose of good humour (and of course remembering the rules to Bananagrams)!