The original plan for this trip was to go to Howletts Hut in the Ruahines via a Friday night stay at Longview. This would be a great plan for a dry and moonlit Friday night, but that wasn’t the way the weather was shaping up. Instead, the forecast was for strong winds and heavy rain (from the north east) to set in on Friday afternoon, only to abate by about Sunday afternoon, about the time we would get back to the van. Plan B was to walk in to Daphne, where the EM group were heade 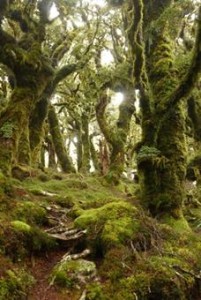 d, but this didn’t look like a particularly clever idea either, given the walk through the gorge to get to Daphne.

Being a small group, we decided to be flexible and opt for somewhere in the Tararuas, leaving Saturday morning, and after considering just about every possible road end/hut we settled on Kiriwhakapapa road end and walking to Cow Creek Hut. After a relatively relaxed start (OK, we stopped at the French Bakery in Greytown), we got to the road end and got started.

It was a pretty easy walk up to Blue Range Hut (2 hrs) where we stopped for lunch. Spencer looked in the hut book and found that a group of 8 had stayed there the previous night and were headed for Arete Forks Hut. Apparently this wasn’t great news, since there was a decent chance that they might end up at Cow Creek Hut (6 bunks).

From Blue Range it was pretty flat for a few kms, as far as a bent sign pointing down the hill. At this point we could either stay on the track, or follow the ridge down past spot heights 970, 890 and 810 to Cow Saddle. We opted for the easy choice of following the marked track, figuring that it was probably better to get to Cow Creek sooner rather than later.

This led fairly steeply down to the river, and then along for about a km to a suspension bridge about 3 hrs from Blue Range. Cow Creek Hut was directly on the other side, and there was a fire on with the other group. Whilst friendly enough they weren’t sending out ‘we want to share our hut with you vibes’. This was probably the low point of the trip, as we stood around in the rain having a quick confab about what to do. Option A was a rainy night under the fly and/or crammed into the hut, and option B was a return trip to Blue Range. General consensus was that it was worth the 3 hrs return trip in order to have a decent night in a hut, so that was it. We had about 1.5 hrs daylight at this point, so at least we’d be a good bit of the way there before it got properly dark.

As we made the ascent, it felt like the rain was beginning to properly set in for the night, having been showery all day, so it felt like the decision was being vindicated. We got back up to the bent sign after an hour or so, which meant that most of the climbing was over. After that, it was a case of spot the orange triangles. It’s interesting that you only see about half of them when it’s dark.

We were back at Blue Range after 3 hrs, which felt like pretty good going. Having already walked the route outwards it made the return journey that bit quicker. Good news was that nobody was there. 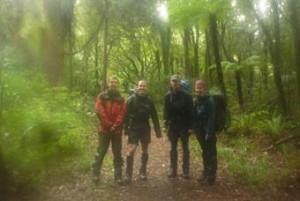 dinner in front of a decent fire. By this point it definitely felt like the right decision being at Blue Range.

Sunday was obviously an easy day, as there wasn’t a great deal to do other than walk out. We did a bit of firewood gathering in the morning, and were back at the road end for an early lunch under the shelter. Entertainment en-route was provided by a very vocal kaka. It was only obvious how heavy it was raining once we emerged from the bush, so I guess there was something to be said for having done most of the walking on the Saturday.

Returning to Wellington we heard it had been a good weekend of dry weather, which was just a little disappointing, but all in all, it was good to get away with a great crowd.