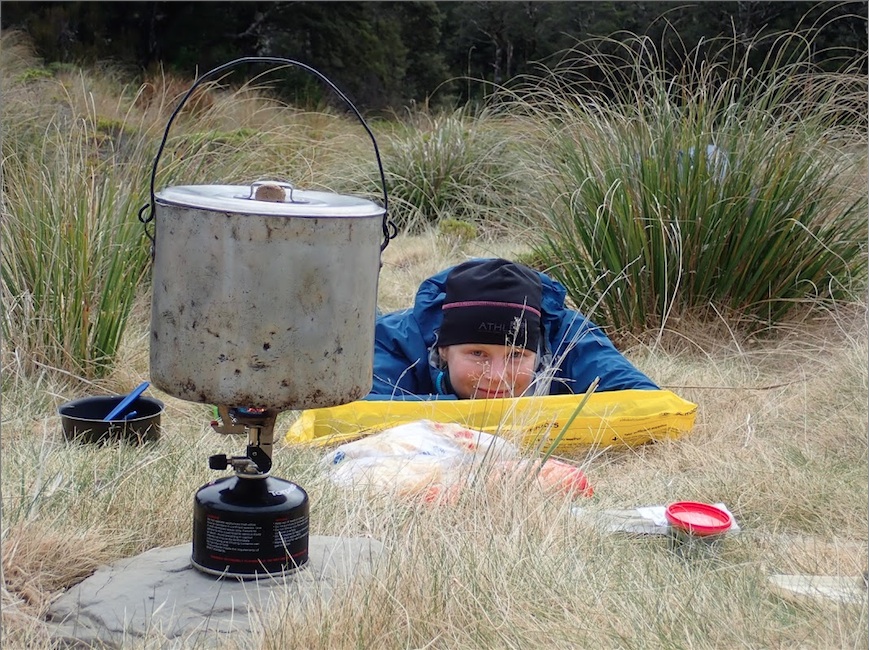 On Friday night our party of 11 stayed at Owen River Tavern campsite. The next morning, we drove 30 minutes over an unsealed road to the trailhead at 442828 and started our tramp at 8:40 after the obligatory group picture.

There hadn’t been any rain for days, so the river crossing in the first bit was quite easy and we made it to Lake Matiri Hut in 1 hour 40. It is a nice hut, with a beautiful view across the lake.

The next bit was slightly harder. We shed sweat and tears on a 800m climb over a very steep bush track that would have fitted perfectly fine in the Tararuas. Despite repetitive pleas to stop for a lunch break, the group marched on until we reached the rim of the main plateau, where we finally came to a stop for a solid refuel. We all felt better now, as was clearly captured in group picture 7.

The plateau is stunningly beautiful (aka ‘far out!’) and seems to go on forever. With lots of small breaks, we leisurely made our way to Larrikin Creek Hut on the far North of the plateau where we arrived at 17:40. Despite the dry weather the previous days, the track was still considerably boggy, and I was glad that we weren’t there right after a period of rain. Somewhere on the way, during group picture 18, Juan left his walking pole/tripod as a reminder to go the same route back the next day.

At the 4 bunk Larrikin Creek Hut, we all pitched our tents, had a good dinner and went to bed early.

The next day, we submitted ourselves to a little experiment over breakfast. The conclusion was that the local stream water was surprisingly drinkable (0 casualties among 11 double blinded volunteers, (Epub. ahead of print Nature Kahurangi 2018 Oct;21 (11) 1005-1013 doi:10.1038/ni.1941 ).

We set off to walk up to the Needle. We followed the stream that led directly north from our camp to 428998, then traversed north west to the saddle, from which we followed the ridge to the top.  On the way up, we repetitively cursed the prickly spaniards (or Los Putas de Espanioles, as we learnt to pronounce it). The descent was a lot easier. From the top we could clearly see the bush track that ran 50 m to the true right of the stream that we had followed on the way up. A marker next to Larrikin Creek Hut points you this way, but we had thought that the track didn’t go anywhere. It does.

From our campsite, it had taken about 1.45 to the top of the needle. The views were again stunning, and formed the proper background for group picture 23. From there, we had many other ambitious options to fill the day. We picked the one that involved relaxing on the top for another hour to enjoy the sun, before going back down to Larrikin Creek Hut (about 1hr), having a nap in the grass, then taking a long lunch break and leisurely walking back to Poor Pete’s Hut (while navigating our way back to the GPS point captured with group picture 18, which seemed to be the last picture taken from the pole/tripod.) At the hut, dinner was made in 30 minutes. But making dessert took another hour-and-a-half! Whoever put the custard in the WTMC recipe book surely holds shares in the Primus Camping Gas Company.

We brought some 10x concentrated lemon juice to flavour our bulgur. What started as a dare to taste some, ended up in Byron simply spooning out the venom to supplement his meal and further acidify his body and mind. Far out!

The next morning we woke up in a mysterious landscape where the clouds covered the plains just below us. These evaporated as soon as the sun rose and it all turned into another day of glorious weather. With numerous breaks, we tramped from Poor Petes back to Lake Matiri hut in 3.5 hours. Some of us opted to go for a swim in Lake Matiri. In good spirits we ran towards the lake’s edge. Only seconds later, we found ourselves stuck groin-deep in the muddy shore and barely able to move at all. Our effort to reach the actual water was comparable to climbing the Needle the previous day.

After lunch, we tramped out to the road end in 1hr 50min, with a quick break for another dip at the bend of the river, which was actually a far easier place to swim than in the lake.

We were back in Picton with plenty of time left to buy the ice creams, fruit and beers that we had obsessively talked about on the Plateau. We were home before midnight, full of memories of this epic trip.