There’s something very appealing about traversing a mountain range – crossing from civilization on one side, via snowy ridge tops, to civilization on the other side, without having to retrace steps to come back to the same familiar road end. And when you can do a key swap halfway to make transport easy, what could make for a better trip?

Twelve punters headed north on Friday night, stopping to camp at Ashurst Domain  – a well-appointed campsite, complete with flush toilets, hot water zip and neighbouring cemetery. We were all tucked away under tents and flys by 10pm allowing for an impressively early start on Saturday. The forecast was for a lot of rain overnight, but we’d packed tents away and hit the road the next morning before the worst of the rain started coming down.

The two vans headed off in opposite directions – group west-east (ably led by Michael Leon “Kinvig”) heading to Limestone Road end near Kimbolton in the mighty Manawatu, and group east-west (no less ably led by Richard) heading to the Hawkes Bay side of the ranges.

Group west-east headed to the Limestone Road end with a quick stop at the glowworm caves along the way. It was claggy and drizzling as we left the car park but we were optimistic that it would clear and we would get a view from the top. The track started out relatively easy along the Deerford Loops Track until we reached the junction with Knights Track. From here it was a steep slog to the bushline. After a short hailstorm the clouds started to clear and we began to get patchy views across the plains towards the west and south. We had a brief stop for lunch then made our way up to the highest point, Toka, at 1519m. 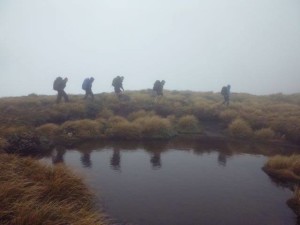 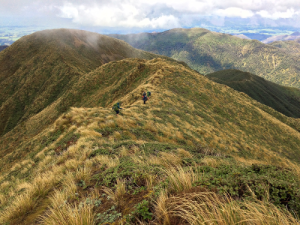 From Toka the track continued along the tops where we enjoyed the views before descending towards  Leon Kinvig Hut. The track through the bush down to the Pohangina River was steep, wet and overgrown in areas. After crossing the Pohangina River we were glad to reach the hut and take off our wet boots. It had taken group west-east about 5.5 hours to reach the hut from Limestone Roadend. 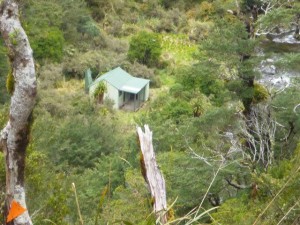 Group east-west headed to the Ngamoko road end, with a brief stop in Dannevirke for real coffee and service that left much to be desired. It was raining steadily and the local farmers were very surprised that we would choose to head out into the hills in this weather…for fun!?

The Apiti track started off along an old road that had been planned to be built across the Ruahines. The signboard at the start told us the project stopped because of the Depression, although given some of the country we were about to cross, it could just as easily have been stopped because the builders realized what a crazy idea it was! 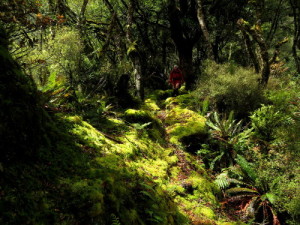 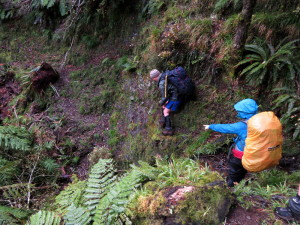 Heading up the Apiti track, it took us about 4 hours to reach the tops, heading steadily (and sometimes steeply) upward most of the morning. We were treated to rain, hail and patchy views out over the Hawkes Bay. Lunch was accompanied with a brew, thanks to Richard’s cat food tin cooker (no cat food included). 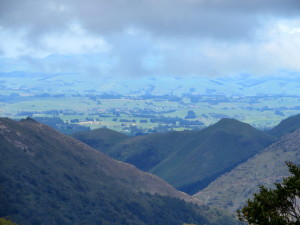 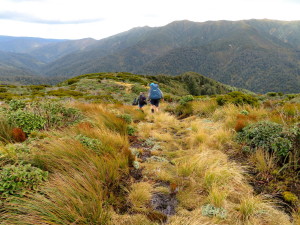 Once we broke out of the forest, it was a very short trip along the tops before heading back down into the bush towards Leon Kinvig Hut. The going down was tough – steep, muddy and covered with cutty grass. The sort of track that makes it much easier to go up than down. Needless to say we were pretty happy to reach the river and the hut. 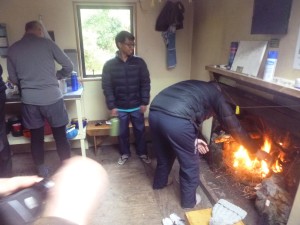 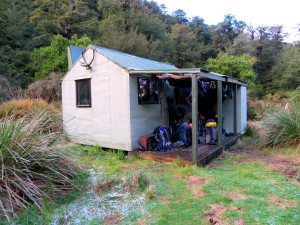 All 12 of us squeezed into the 8-bunker Leon Kinvig hut for the night. By now it was hailing intermittently and no one was particularly keen for sleeping under a fly in the hail. It was a cosy night – we played a few rounds of cards and tried not to get too smoked out by the fire. A delicious thai green curry was whipped up, with perfectly timed rice and tons to go round as always. Dessert was a selection of choc biscuits, including some rather interesting tropical flavoured Tim Tams (the consensus was that mango flavour was weird, pineapple flavour though was comfortingly pineapple-lump-like). We took over the hut – all 8 bunks and 4 of us on the floor, so it was a good thing no other groups arrived expecting a spot to sleep! 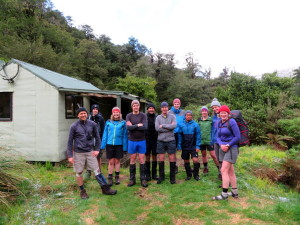 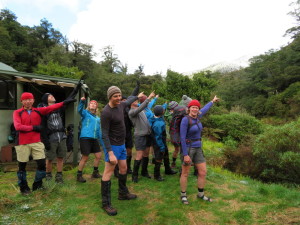 We woke up to hail on the ground and snow on the tops. As the West-easters grimaced while putting on their soaking boots from yesterday’s river crossing, group East-west had the joy of starting the day with a good soaking. The river had gone down slightly overnight but was still up to mid-thigh in places. But its amazing how quickly frozen toes warm up, especially when you’re heading uphill. 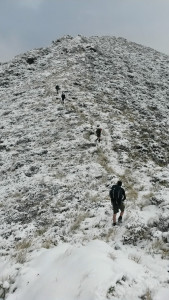 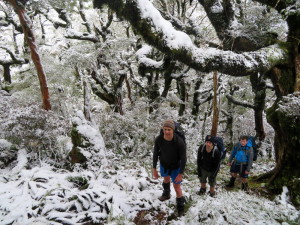 The forest was a magical sight, with every branch and fern frond iced with snow. It had been quite a dumping overnight – once we were out on the tops the snow was at least ankle deep.

The east-westers headed up to Toka – the high point of the trip at 1519m. There was little wind, and the the sun almost peaked out from behind brooding clouds. We passed frozen tarns near the top of Toka, then took a turn onto Knights Track to begin our descent.  As we came down the cloud cleared and we got awesome views of the snow covered ridges rolling down to the green plains of the Manawatu. 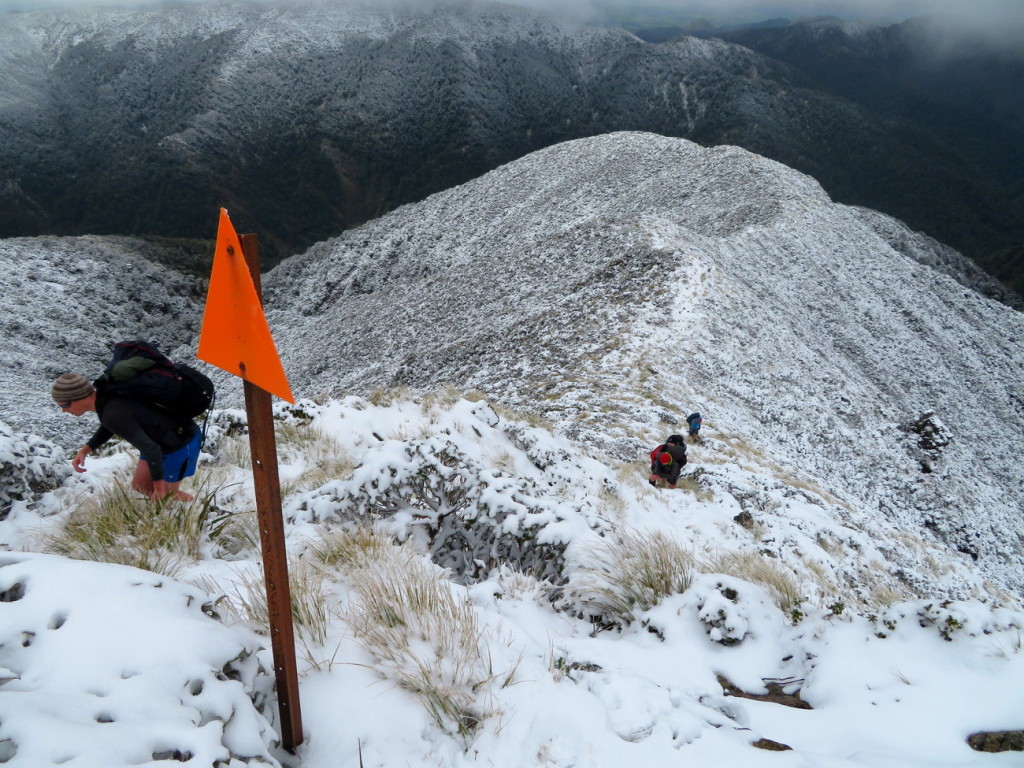 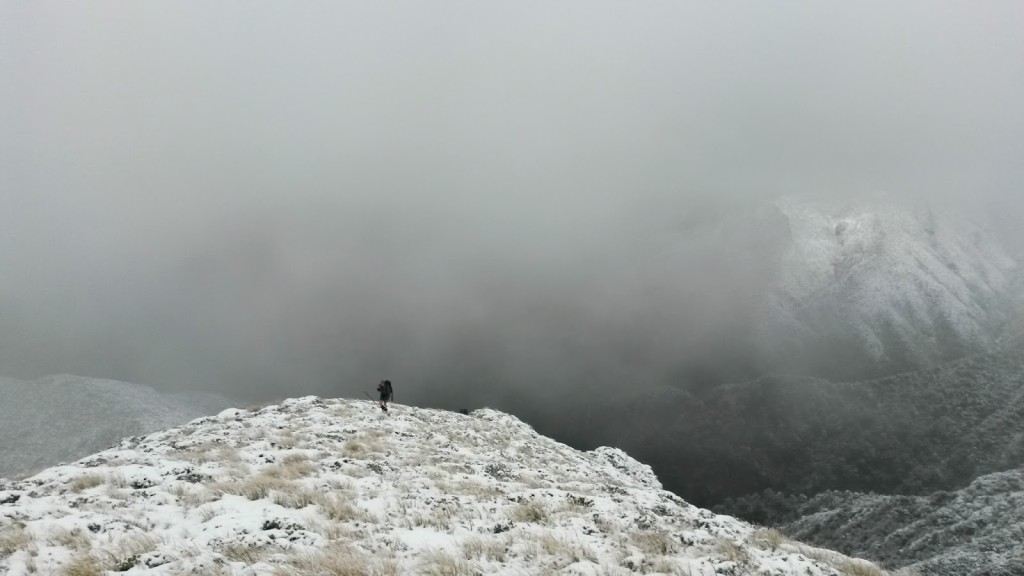 We stopped for lunch part way down the ridge. Lunch started in the sunshine and by the time the cat-food-cooker had provided us with cups of tea, snow had started to fall which brought an abrupt end to our break. We carried on down the ridge before reaching the wide flat paths on the Deerford Loop track which took us past big old rata and beech trees for the last 30 mins of the trip. In keeping with the weekend of quickly changing weather, we reached the van just as rain came pelting down. 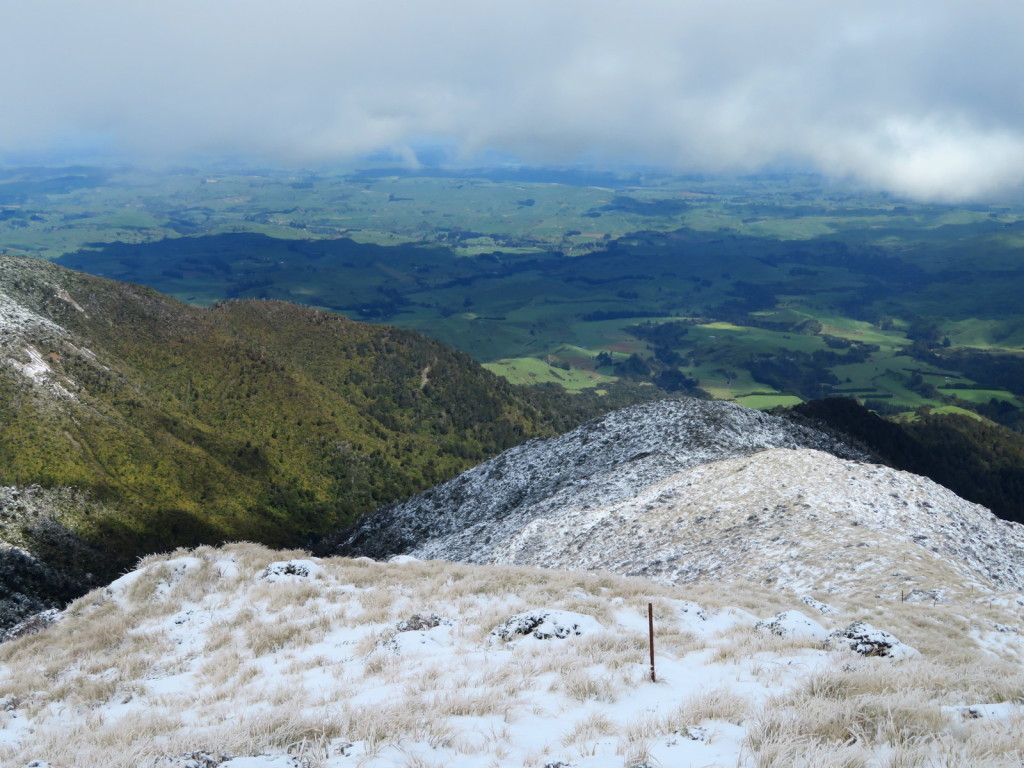 After providing the east-westers some supportive encouragement for their river crossing, the west-easters headed up the hill towards the Apiti track. The snow got thicker as we headed towards the tops where we briefly enjoyed views before descending back into the bush. The weather was mostly calm and clear for our trip out to Ngamoko Road. The west-easters took about 7hrs to walk from Leon Kinvig Hut to Ngamoko Road-end on Sunday. 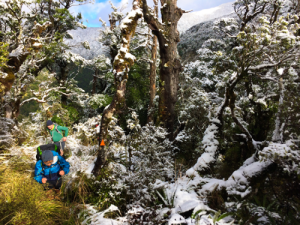 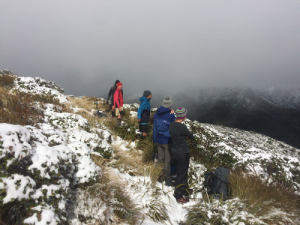 Thanks to Michael for organising the logistics of the trip and to Michael and Richard for leading the groups.