After the trip was postponed, rescheduled and the ferry was delayed, we squeezed into the hire car and arrived at Nelson Lakes camping area very late on Thursday night. The morning dawned bright and clear with a few sandflies finding my legs tasty. After breakfast we met up with John, a mate of Tony’s from a few moons ago who was running the shuttle service that took us up to the Robert 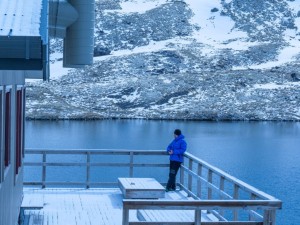 Ridge carpark. Here, despite a forecast for passing snow showers throughout the day, a unanimous decision was made to walk to Angelus Hut via Robert Ridge.

Lots of switchbacks to warm us up before the Bushedge shelter where it started raining. Rain jacket on and then up. The snow flurries came in and the temperature dropped. Getting colder, Gareth and I stopped in Relaxed shelter to put on overpants– by the time we left it, the sun was out…Murphys Law in action! Gareth and I sweated our way along the ridge in sunshine, watching the weather move around and admiring the colours of the rocky ridge stretched out before us, with only a few patches of snow. Elizabeth was setting a cracking pace, and Tony and Fiona were being tail-end paparazzi – I was expecting lots of stunning

photos to go with the trip report!

Shortly after the first basin with the abandoned ski field, the rain arrived again and visibility dropped. We walked through it and broke into the sunshine again not far from Flagtop. It was a bit windy so we descended for a sheltered sunny lunch stop with a view of the third basin – picturesque tussock, snow, scree, but no tarns of note. Two Americans passed by as they came back from Angelus and told us the way ahead was all pretty unsnowed. For the rest of the day we wandered at a reasonable pace through the snow showers that came and went, stopping for snacks and photos of the beautiful snow-dusted scenery, until we descended to Angelus Hut at about 3pm.

More wood on the fire, a hot cuppa, a few old National Geographics, a cosy spot by the fire and I was set and ready to be sedate for the evening. Gareth however was a hi 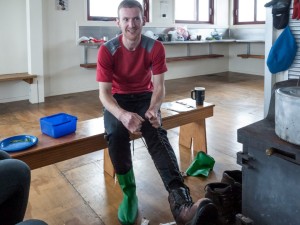 ve of industriousness – he had been pondering the roominess of his boots for most of the day and at an indeterminate moment realised he had left his innersoles somewhere (not in his boots). Gareth’s mission for the evening was to develop something akin to innersoles, using whatever non-personal property was in the hut…

He quickly honed in on the thermal insulating and relative cushioning properties of paper….I started to read my magazine more quickly. Prototype one looked remarkably like rollie cigarettes – squashing lots of small rolled tubes of paper into the sole of his boot. This failed the comfort and continual coverage tests. Prototype two was even more labour and resource intensive – lots of small (<1cm diameter) balls of scrunched up National Geographic, crammed into the sole of his boot using a complex particle packing model. This seemed very promising.

Midway through our very tasty dinner, complete with smoked salmon, two more trampers turned up. During the course of the evening the conversation with these trampers turned to floating floorboard underlay! Gareth was not slow in making a connection between the squidgy purple stuff with reflective gold foil coating, and innersoles. The carefully laid layer of paper The Mouth “n” Ear | December 2013was unceremoniously removed from one boot and replaced with the purple ‘squidgy sole’, with gold side down. The trial stroll around the hut was completed and declared a success. With a bit of fine tuning, Gareth’s boots were ready for an ascent of Angelus Peak, and we were ready for bed.

Saturday dawned fine-ish and suitable for a summit. We set off, and after a few stream jumps to avoid wet feet, were scrambling over rock fall and then up tussock towards Angelus Peak. Soon it got snowy and steep enough to get out the ice axe, and shortly after that the crampons. We dumped our packs at a rock wall and then proceeded up over scree and snow, in poor visibility. About this time my crampons started to have some technical problems that needed fixing…annoyingly close to the summit. Gareth and Fiona continued on to the summit for some photos of the mist. Stuck o 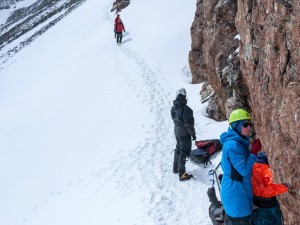 n a rock, I trouble-shooted and sorted my crampons with the assistance of Tony and Elizabeth who was regretting wearing her loose tramping boots.

After the excitement of summiting and fixing crampons, we tramped to Sunset saddle and looked over into the magical valley before us…circled by peaks, our path downwards was a mix of snow and tussock. Off came the crampons, so we glissaded and moved quickly down the valley until we came to the first emerald-green tarn. We kept going to lunch in the sun overlooking the next tarn in Hopeless stream, just above a waterfall. Across the waterfall at the outlet of the tarn, along some snow-grass and rock slopes and then a scree run to the bottom of the valley. The scenery changed and it cooled down as we entered the bush and followed the track to Hopeless hut. From here it was a gentle downhill for about 1.5 hours, crossing quite a few side streams until we arrived in the Travers Valley.

Once in the valley, Tony lead us to his primo campsite – a sheltered, grassy alcove next to the Travers river. Before long, we were cooking dinner, putting up the fly and keeping cosy beside a not-modest fire. After seconds and thirds of chorizo pasta, we waited a bit and prepared our sticks for dessert -fire-roasted marsh 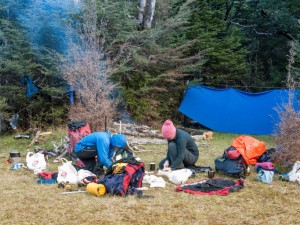 Sunday dawned sunny and we slept in after our late night. Tony got the fire going and we took bets on the time it would take the sun to reach our campsite. After a leisurely breakfast cooking toast on the fire and drying the fly and stuff in the sun, we headed away about 10am, for an estimated 6 hour walk. It was a brisk pace all day, on the track down the Travers valley and around the eastern side of the lake. We made it back to the Nelson Lakes campground just in time for a celebratory dash into the lake before leaving at 5pm to catch the 7pm ferry – just!