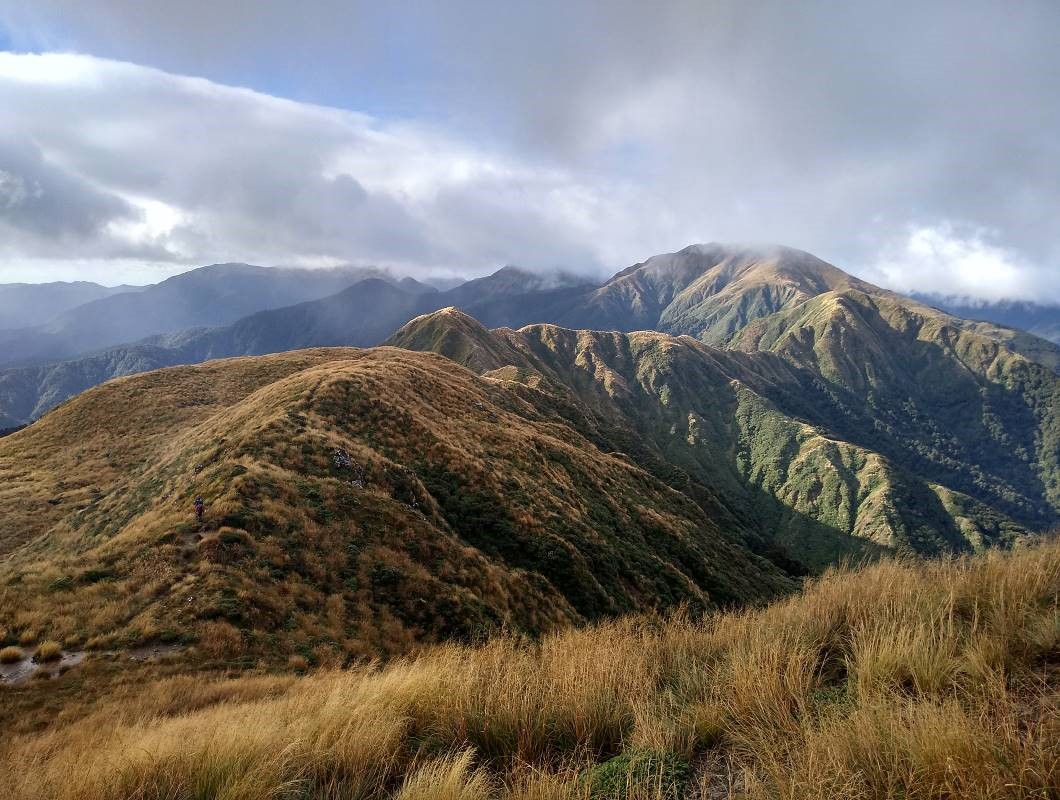 This route is one of the few opportunities to make a weekend loop from Holdsworth that gets you onto the stunning middle range of the Tararua Ranges. It does, however, require quite a bit of effort to make it work, with multiple steep climbs and descents, and with Powell Hut currently out of commission the Friday-night walk in to Totara Flats is a tough introduction to the weekend!

We tried it as a Medium-Fit trip, tackling this otherwise ‘Fit’ trip route with a Medium-Fit pace. However, given the altitude gains and losses, I would simply class this as a ‘Fit’ trip, no matter the pace one takes.

We had calm conditions in the valleys for the walk in, up the Gentle Annie Track and onto Totara Creek Track. Since I last went this way the bridges have been repaired and the track, though wet and muddy, is in good condition.

To the song of several Ruru (Morepork) and a couple of stag roars, our steady pace found us with heads-on-stuff-sacks in under 4 hours.

Totara Flats Hut is a good one to head to if you’re late, as it’s large with many bunks, and if it’s full it still has decent floor-space and a generous covered verandah.

We knew Day Two was going to be the longest and toughest, so we got a decent sleep in and set off after a good feed. Looking at the map, this section has some of the tightest contour lines in the Ranges, making going up and going down equally demanding. Here’re some of the approximate elevations throughout Saturday, with a lot of un-noted variation between these landmarks too :

From the DOC times, we estimated 11 hours with breaks, but it took us 12 hours. I think we still made excellent progress, and it was really the climb out from Neill Forks Hut that took an hour longer than expected – it’s quite a haul up there and we were into snow at the summit, but it’s this ascent that brings you to some of the most stunning views in the Ranges.

The end of the day saw us with head-torches on as we descended from Aokaparangi to Mid Wai-o-Hine Hut – a lesser travelled and rougher-for-it track that’s hard-going on tired legs.

But at the hut, three hunters had the fire going and after a hearty kedgeree we were in good spirits and falling into our bunks for the night, listening to one of the hunters enthusiastically tell us about the sheep-shearing records he’s achieved.

Sunday was a relatively straight-forward ‘up-n-over’ Holdsworth, though this is a good climb after a big day. The sun came out to cheer us and we had a lovely picnic lunch at the summit, sheltered from the nippy southerly wind.

As we reached the Gentle Annie Track I felt the pace noticeably pick up, and before too long we were at the van, changing and swapping stories. What a great team.