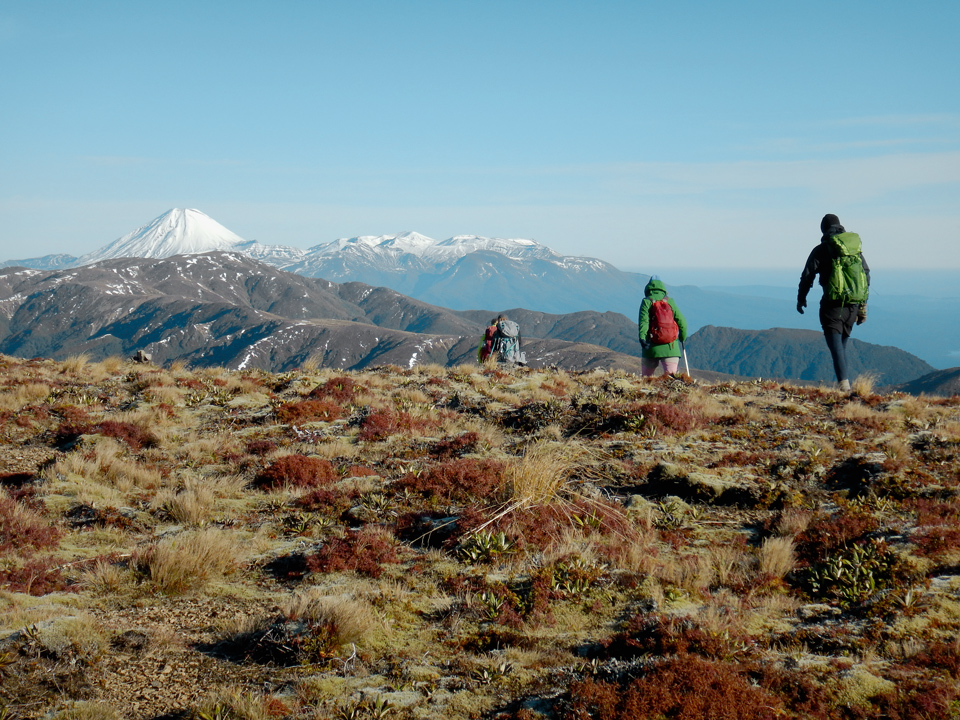 I had never been to the Kaimanawa Forest Park so when Tereza put this trip on the schedule I signed up.  This trip also coincided with the start of some annual leave for me, so if we had a late return to Wellington on the Sunday I didn’t have to worry about getting up early the next day for work.

We shared the van with Anne’s group and departed from Wellington Railway Station on the Friday evening.  We had a long drive ahead of us but we had a quick trip and arrived at the Urchin campsite (off the Desert Road) about 10:30pm.  We were surprised about this time as many of us were expecting to arrive about mid-night.

We sorted ourselves out and set-up the tents.  Tereza disappeared for quite a while during this time and just as we were wondering where she was she reappeared in a rather shell-shocked state.  While on a mission to collect water she dropped the billy lid and then had a 3-4 metre scramble down a steep bank to retrieve the lid.  She managed this successfully and even made it back with some water in the billy.

It was cold with some drizzle overnight but dry by the morning.  After packing up on the Saturday morning Anne took us up to the Urchin roadend for the start of our tramp.  This also turned into an adventure.  A combination of a steep and slippery access road and no 4WD capability meant we got stuck at one point in some mud.  However, with some excellent driving on Anne’s part and some pushing by the rest of us we managed to get to the roadend.

Anne departed to collect her group from the campsite before heading off to Rangipo Hut.  We started tramping just after 9 am with a climb up to the tops.  We had perfect conditions for tramping and I was able to wear my shorts and polypro tee shirt for the first hour or so.  However, once we emerged from the bush the wind was cold and we all had to put on more layers.

As we ascended we could see the Desert Road in the distance and Lake Taupo further away.  The volcanoes of Tongariro National Park were covered in clouds and we started to wonder how Anne and her group would get on.

We reached Urchin point and could see the landscape unfold before us.  Despite overcast weather we could see the big country of the Kaimanawa Forest Park and central North Island.  We could also see our route along the tops.

As we traveled along the ridge we had two options for reaching Waipakihi Hut.  One option was to continue on the tops to the Umukarikari Range and then along to the hut.  The other option was to drop down to the Waipakihi River and then follow the river upstream to the hut.  After some indecision (and Tereza rolling her eyes at the indecisiveness of her group) we decided to take the river option.  This option meant we would do a circuit rather than a there and back trip.  From the tops it looked like there was good travel in the river valley and we could see some grassy flats.  The weather forecast had also predicted strong winds for the rest of the Saturday so travel in the valley would be less exposed.

There is only about a 400 metre descent from the Urchin range to the Waipakihi River and we reached the valley in the late morning.

For the next six hours or so we tramped up the river valley.  There is no official track but there are trails that we followed at times while at others we just took a straight route over river flats.  We also sidled along the river bank in places and waded up the river alongside the bank in others.  In general we traveled on the true right of the river but we had about 10-15 crossings in order to keep to the most direct route.

Travelling up the Waipakihi river would not be possible if there was rain and a higher water flow.  As it was, the river was surprisingly swift and at its deepest was up to our waists.

Unfortunately, as I stepped into the river to cross at one point I slipped and fell in.  With the swift water and slippery rocks I floundered around trying to grab onto some nearby branches and to stand up.  However, quick thinking on Maj-Britt’s part saved the day – she shouted out to me and reached out with her walking pole.  I grabbed onto the pole and was then able to clamber back onto my feet.  I was wet through but my pack and gear was dry and were we able to keep moving so I could warm up.

Luckily soon after the river dunking we spotted Waipakihi Hut in the distance.  The hut was about 1 km away and we had to cross a swamp to reach it.  At times some of us sank up to our thighs in the swamp.

We were relieved to see the hut as we were all tired from the journey up the river and I was still wet and a bit cold.  Dusk was falling and we would have needed our head-torches if we had not otherwise reached the hut when we did.  We had travelled about 13-14km upstream in the afternoon and reached the hut at about 5:30pm.

The weather had been chilly all afternoon with the odd rain shower and it was cold by the time we reached Waipakihi hut.  Maj-Britt got the fire going and we all pitched in for dinner and dessert so we had a cosy evening.

The inner door handle of the main room of the hut is broken at the moment so we had to leave the door slightly ajar so we could come in and out.  We did accidently close the door from the inside once or twice but managed to open it with some jiggling around with the handle but also with someone clambering out a window to open the door from the outside.

The two bunk rooms reminded me of the historic Waihohono hut in Tongariro National Park that has male and female sleeping rooms.  We did split up overnight with James and me in one room and Maj-Britt, Quinn and Tereza in the other.

It was cold overnight and the thermometer on my watch recorded four degrees on the Sunday morning in the bunkroom.

Sunday morning dawned crisp and clear so we put on our wet and cold socks and boots and headed up on a side trip to Junction Top.  We were being picked up at 4 pm so we had time up our sleeves for further exploration.

It took us an hour or so to climb up to Junction Top.  As we climbed we had spectacular views of Ruapehu, Ngauruhoe and Tongariro, plus the Kaimanawa Range and surrounding country.  I had been tempted to stay in my sleeping bag for the morning but it was well worth getting up and having a cold start to enjoy the views.

We saw lots of snow on Ruapehu so we wondered how Anne and crew were doing at Rangipo hut on the Ruapehu round the mountain track.

After enjoying the views from Junction Top we returned to Waipakihi Hut for packing up and an early lunch before our trip to the roadend.

We had great tops travel along the Umukarikari range on our way back to the Waihaha roadend.  We enjoyed easy and speedy travel along the ridge and also enjoyed the views towards Ruapehu and around.  There were patches of snow here and there but not enough to cause any difficulties.

After descending through some beautiful beech forest we emerged at the Waihaha roadend about 3:45 pm.  About 5 minutes later we heard the sound of an approaching vehicle and then Anne and company arrived in the van – perfect timing!

We had a safe trip back to Wellington and were at the station before 9 pm.  Thanks to Tereza for organising and leading such a successful and enjoyable trip.  The Kaimanawa Forest Park is now another place I’ll have to get back to for more exploration.