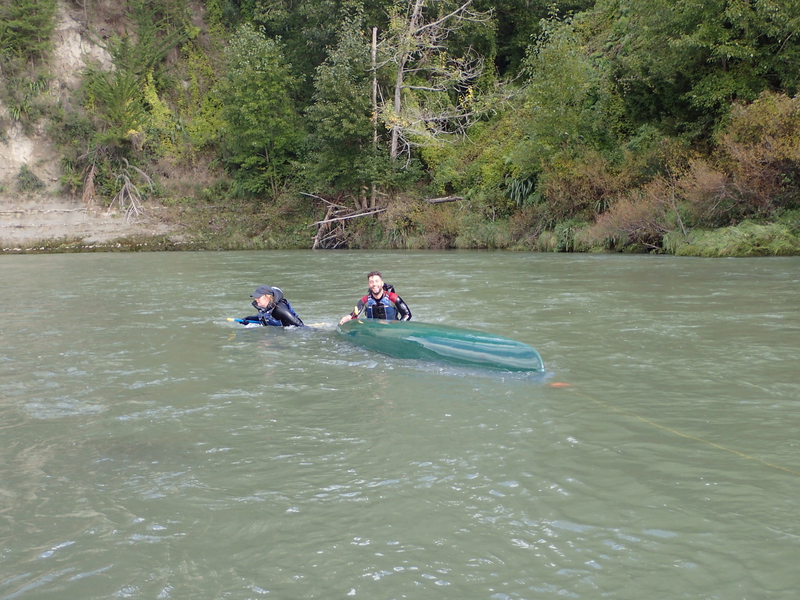 Meeting at the train station was the first challenge of the weekend for the newer members, trying to locate which bus we were on, with 3 buses all heading the same direction. We were the first bus away and after the usual chats, intros and Friday traffic before Pukerua Bay and Otaki we arrived for a break in Bulls 8.30pm all ready for dinner. The only eatery still open to serve was the Thai and with minutes until closing and three minibus loads turning up, were they glad of the custom or wishing they closed early!?

After a driver swap from Richard to Sophie, we arrived at in Ohakune Top 10 Holiday park about 10.30pm, to damp conditions. We had a quick explore, wash-up and sort, and got into our cabins for an early 5.45am start the next morning. Some of us must have been dreaming we were on the river already, as the bunks rocked every time someone turned over.

Early start, early breakfast and a quick pack into the bus, we arrived at the Canoe Safaris, about 5 mins from the Holiday Park. A quick brief and then it was a mealy of packing barrels, trying on wetsuits and hoping to find a matching pair of wetsuit boots. For those of us who had packed for river transit before, this was a quick process. For those new to the river, it was a challenge of what to take, will it fit, how to keep it dry and passing extra gear around to those who had room.

Soon we were loaded on/into trailer and van, and it was off to the river. We took the WTMC van down as far as Taihape and left it at the train station, to reduce the travelling time on Sunday. Nervous chatter about what to expect on the river on the trip filled the van till we arrived at our river entry point at Toetoe Road just south of Utiku. The off-load of gear and repacking into the canoes, was followed by the safety briefing. The river had a higher flow and was a lovely milky colour from the silt.

The pairs were decided Tony and Richard, Daniel and myself (Fiona), Sophie, Outi and Errin with the guides. We started with demos and practise at the entry point so everyone could get a feel for the canoes and how the canoes manoeuvred. We practised paddling, turning, navigating small rapids, using eddies to stop and ferrying across the river.

Basic skills mastered and we were off down the river.

The first rapid claimed its first canoe. Sophie and Phil (guide) ended up with a lot of water in the canoe in the waves and capsized right on the last wave. The rest of us were all relieved to be still dryish on this one.

Once they were recovered, canoe emptied out and gear re-secured, we were off again. The next big rapid, was running at grade 3, so we were all on the river bank and out of the canoes to have a good look, to try and see the best passage through.

The guides with Sophie and Outi, went down first so they could station themselves as safety numbers, to rescue us should we go in. Sure enough one after the other we went down and got our first capsizes and dunking’s in the river. The water wasn’t as cold as I thought it might be, but I got a good lump of silty water in the sinus as I hooked myself out from under the kayak and regained my composure – it certainly blew away the last of the morning cobwebs! Sophie was elated she got to stay out of the water this time.

With the canoes emptied and repacked again it was off down a more gentle section of river which gave us time to enjoy the impressive river gauge with its high cliffs and little water falls. We felt miles away from civilisation, even though we were only 1km away from SH1 as the crow flies! The lunch stop was under a rail bridge that towered above us and we waved to the cargo train passing over the top. Thankfully the passenger trains don’t dump their toilet waste on the track any more.

We stopped at stages all the way down to explore water falls and collect fire wood from the river banks. Mangaweka camp ground was our final landing of the day and we set-up camp and hung wet gear out to dry, while the sun was above the valley walls. Phil took us to the remains of the hydro dam set-up for a leg stretch and explore. In its hay-day it powered the local area and industry. Back to camp and it was into fire building and light refreshments before a delicious version of curry and rice for dinner, followed by fruit and ice cream.

The evening chat around the camp fire was interlaced between showers and moonlight and star gazing, untill we all peeled off to our tents. Next morning we all woke to stiff shoulders and achy muscles, but a good breakfast of bacon, pancakes and coffee topped off with melted ice-cream, got us going.

Phil began building us up for the big one – another grade 3 with a good wave at the start. So it was back into the damp wetsuits and back on the river. A cold shower in another cool waterfall made sure we were awake for what was to come. Once again we landed the canoes above the rapid to walk down and scope out the best passage. With the higher river the waves were big and with deep troughs, however there was a narrow light water passage if you were good at lining the canoe up.

A guide canoe with Outi went down first to take up their safety station and the Phil and Sophie followed. They capsized in the main rapid area and once they were recovered below, it transpired Phil had clipped his knee on a rock in the water. This meant he couldn’t provide safety cover for the rest of us, so we were spared the rapid and ended up portaging the canoes down the edge. When we caught up with them below the rapid Phil was obviously hurting from bad bruising and there was several items of gear loose somewhere down stream. We carried on down to the next exit point from the river and had an early lunch whilst waiting for transport.

The area we came out at on Mangarere Road, south of Mangaweka, was a really pleasant privately-owned camping spot, with a long drop toilet with an excellent view of the river. Once gear was packed back on/in the minibus and trailer, it was back to Taihape to collect our own transport. We said our thank-yous and goodbyes, before the journey back to Wellington.

Our final treat of the trip was stopping at the Foxton Windmill and Dutch café for afternoon tea. A well recommended stop off.