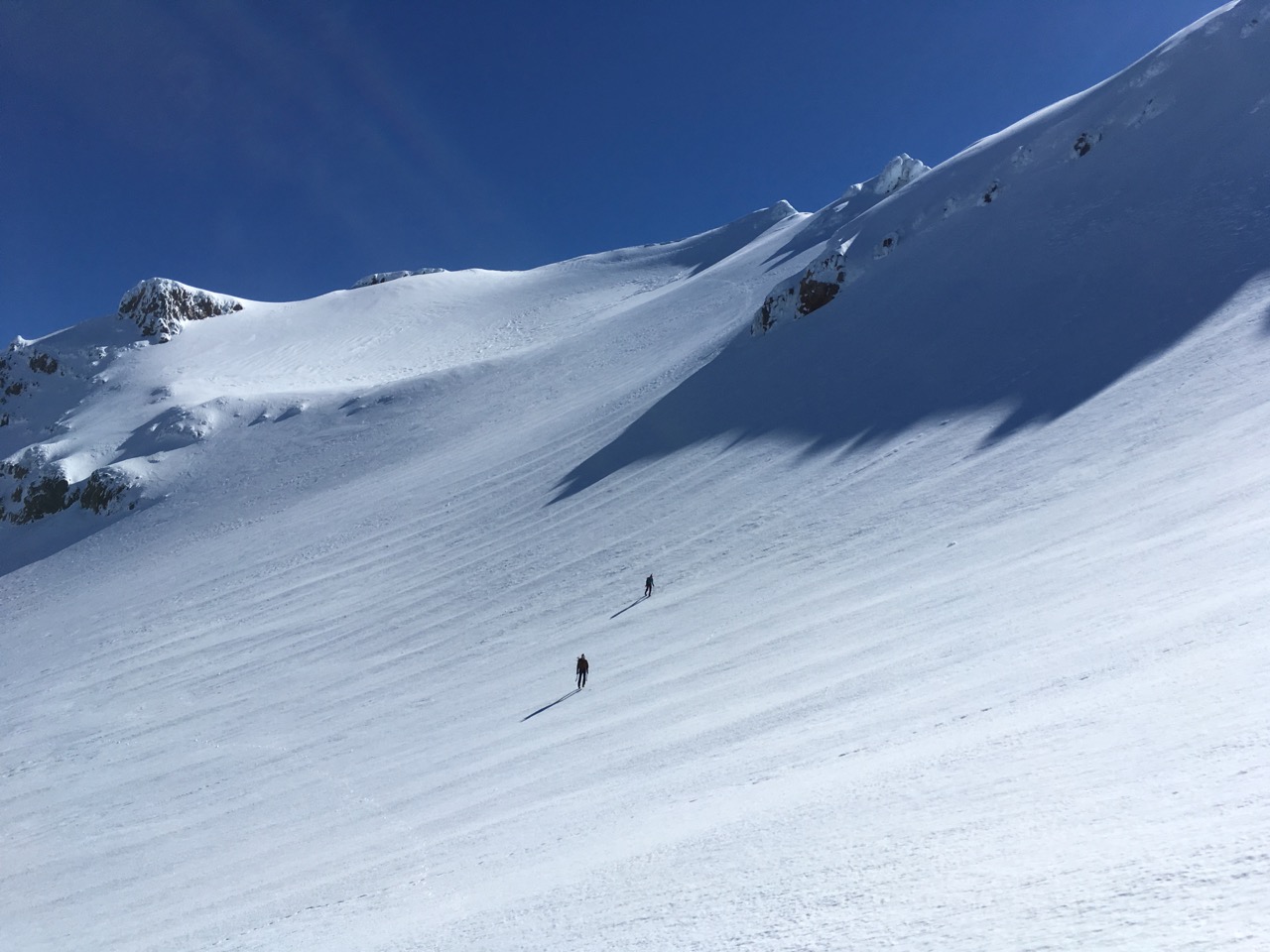 From an initial sign up of eight, disease, injury and maybe even a little pestilence took it’s toll and come the day of the trip our numbers had dwindled down to three. With a freezing level far above the tops we knew that pitched ice was out of the question. With gales forecast for Saturday night I think we knew camping was out as well. Apart from the horrific conditions for either ice climbing or camping the weather on Saturday was looking very nice indeed for a big day out on the hills, with snow forecast for Sunday morning. Luckily for us Ruapehu has loads to offer and we three punters have the same mindset – “stuff it, let’s have a look!”

At the very least the idea of the three of us spending our first night in the closed-for-the-season Tukino ski village on Friday gave us the chance to discuss how we thought our pending murders were going to manifest themselves.

Road chat concluded that if we made it through the night our best bet was stick to a mountaineering day and head up the Tukino ski field, aiming for the summit of Ringatoto via either the East ridge or North Buttress. If the wind wasn’t too full on we’d head on over to Tahurangi.

A nice 07:00 start (07:15 actual) meant that we would get 6 hours sleep. Gear sorted the night before and only 3 punters involved meant that it was a very chilled out, and borderline efficient, start to the day.

Walking up the ski field the snow was feeling good underfoot, with the East Ridge of Ringatoto coming into view spurring us onwards. Only for us to realise that it would be a proper slog to get over to it. Ah well North buttress it is then. An exposed downclimb to roughly where the Whangaehu river and glacier meet gave us a taste for the day ahead – lots of front pointing and calves burning. 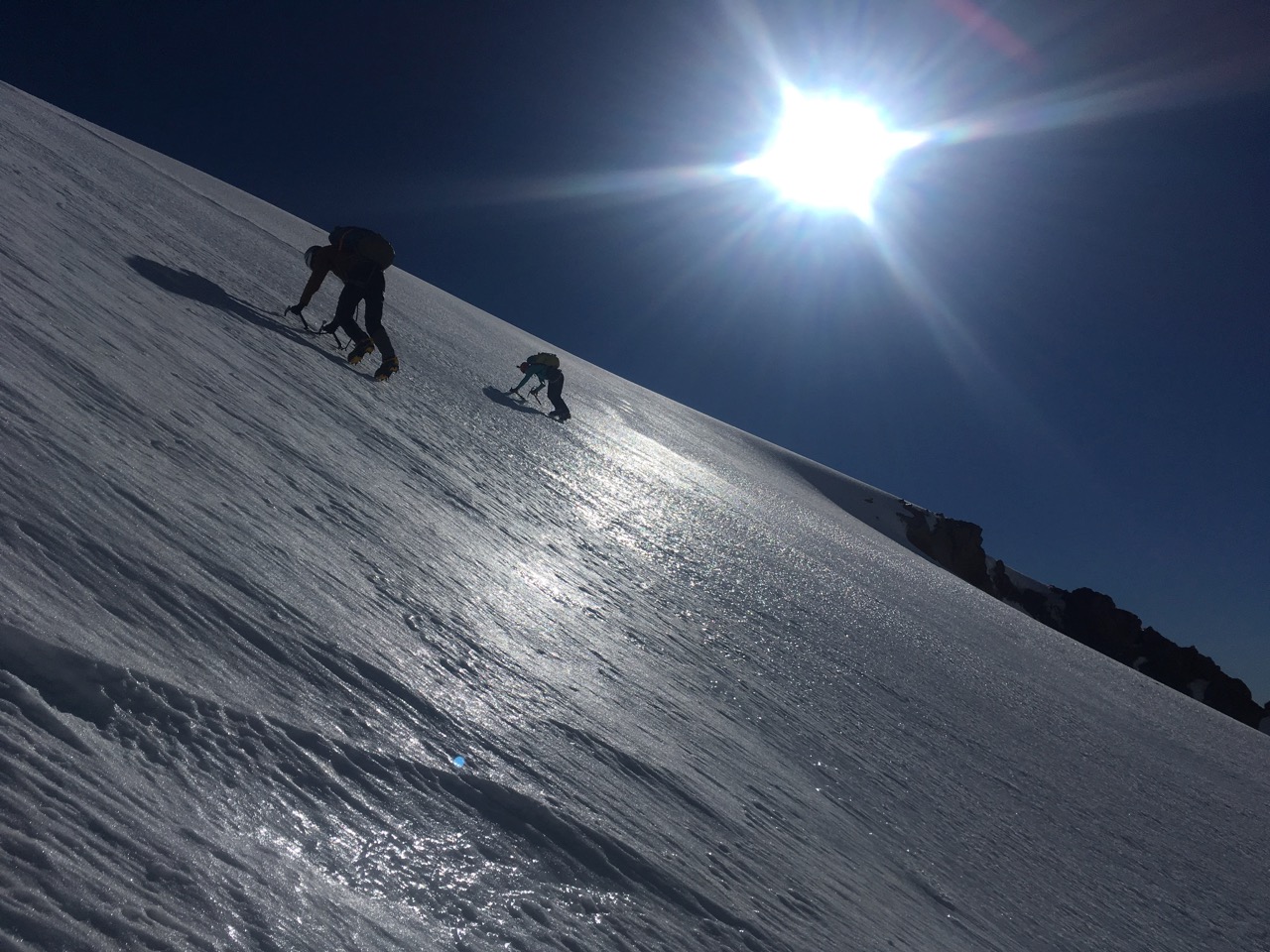 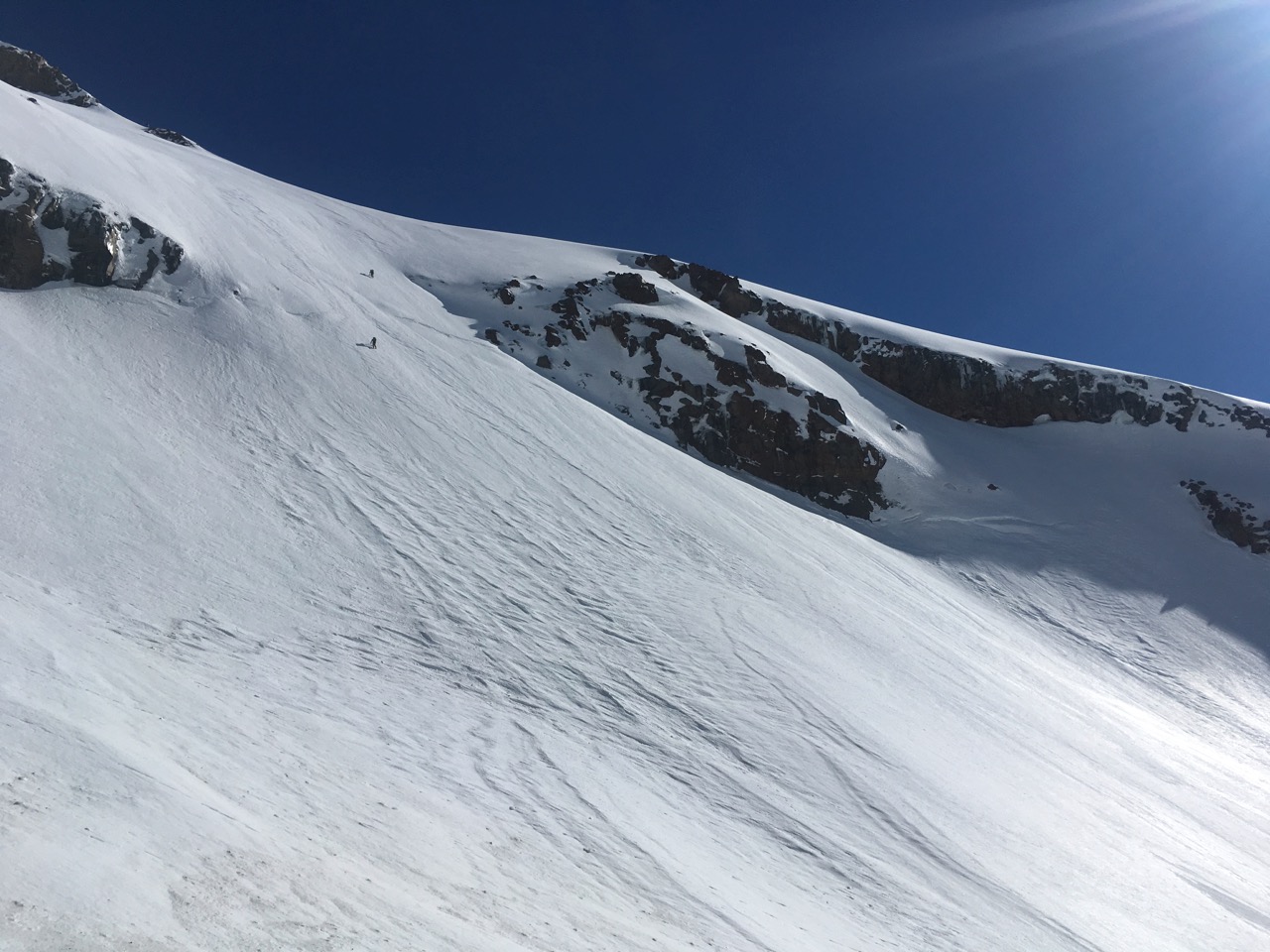 The route description for the Northern Buttress states: “Pleasantly exposed and varied mixed climbing. Start on the edge of the East Face, up to some interesting slabs to reach the ridge proper. A short steep section on the ridge, then straightforward climbing. The difficulties can be avoided by beginning up a snow couloir east of the initial tower.”

Well we didn’t do anything like that! Looking for lines of weakness in this pile of choss we ended up traversing west around the buttress and up the Whangaehu Valley sticking high and on the north side of Whangaehu River. We got our eureka moment when following the turn in the river we saw a very obvious gully sitting there still in the shade – a quick chat about other options from here and the gully won out. Nick took first pitch and it was on. 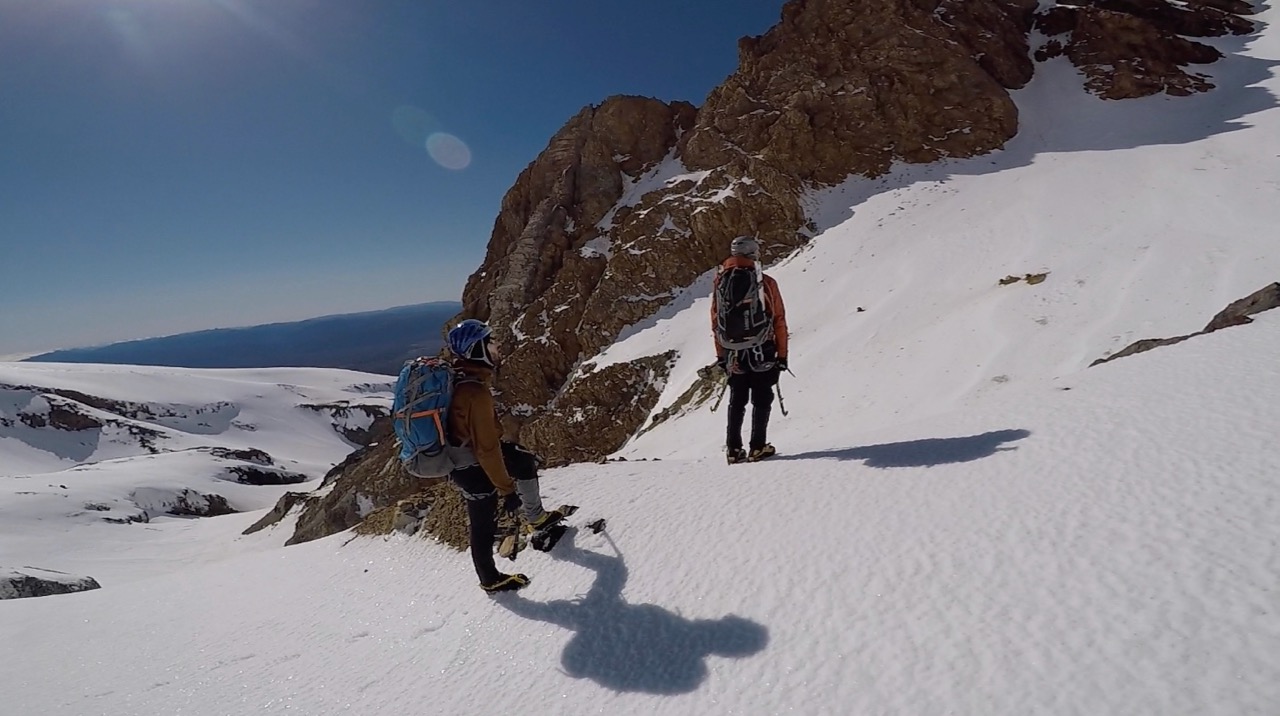 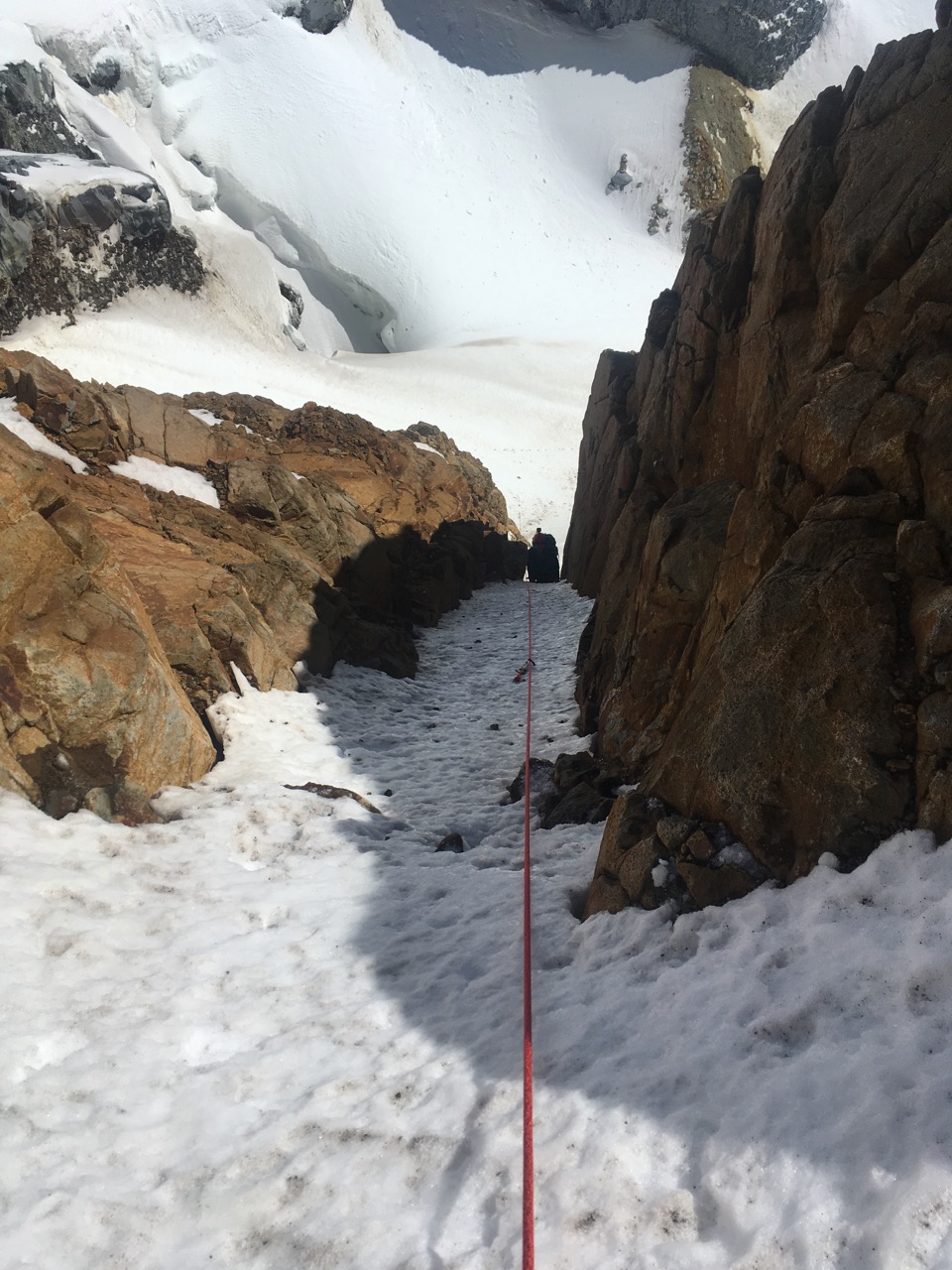 The second pitch and some simu-climbing got us up to a narrow col and things were looking good. 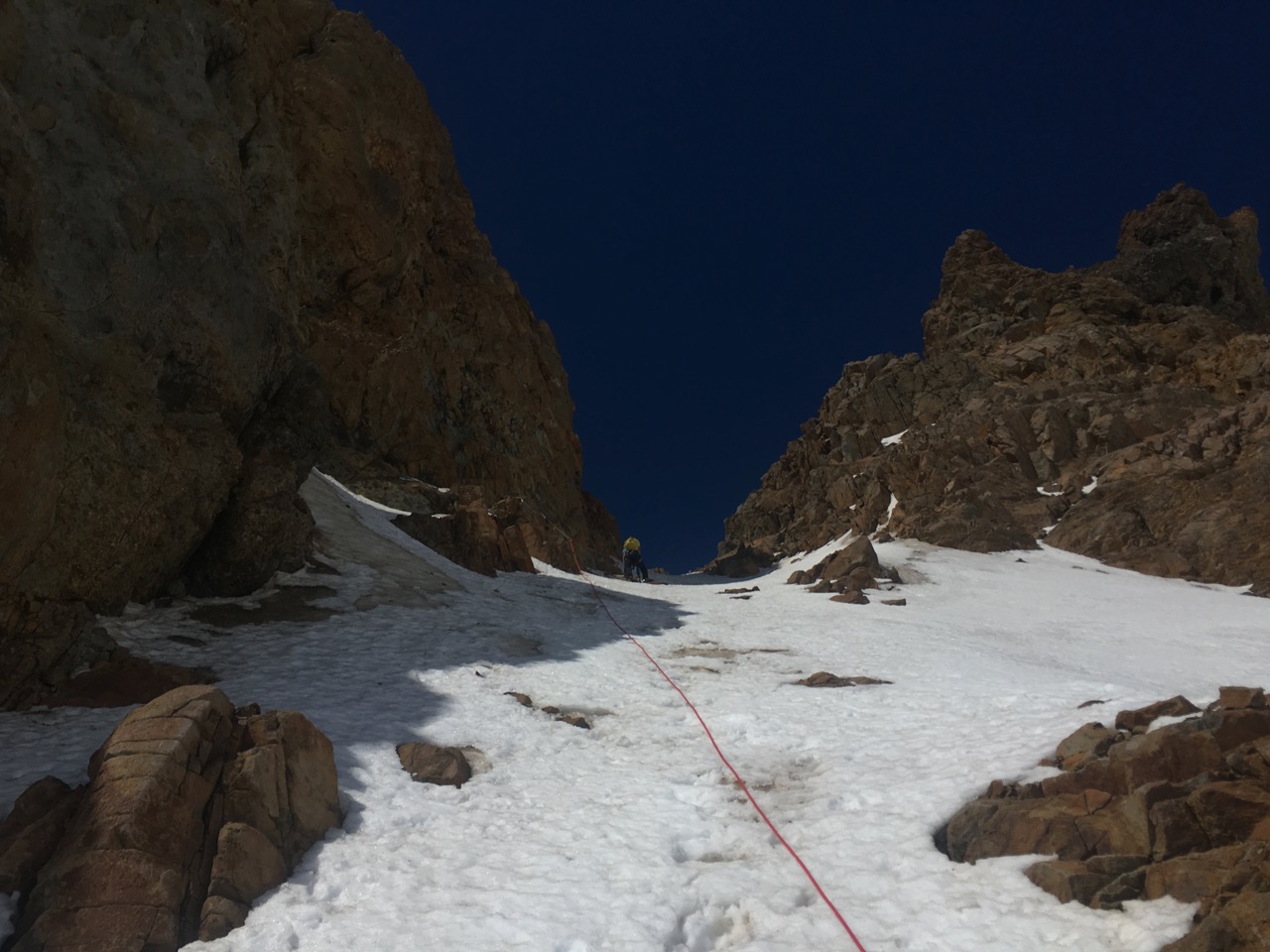 A full rope length traverse and some more simul-climbing had us gain the main Northern Ridge line of Ringatoto. 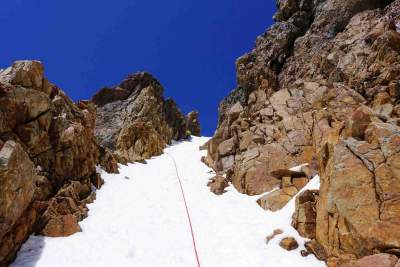 Happy with what was in store next the rope got swiftly and unceremoniously dumped back in the pack and we plodded our way up to the summit of Ringatoto. 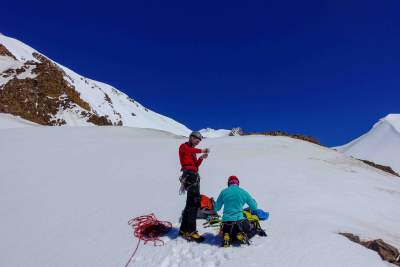 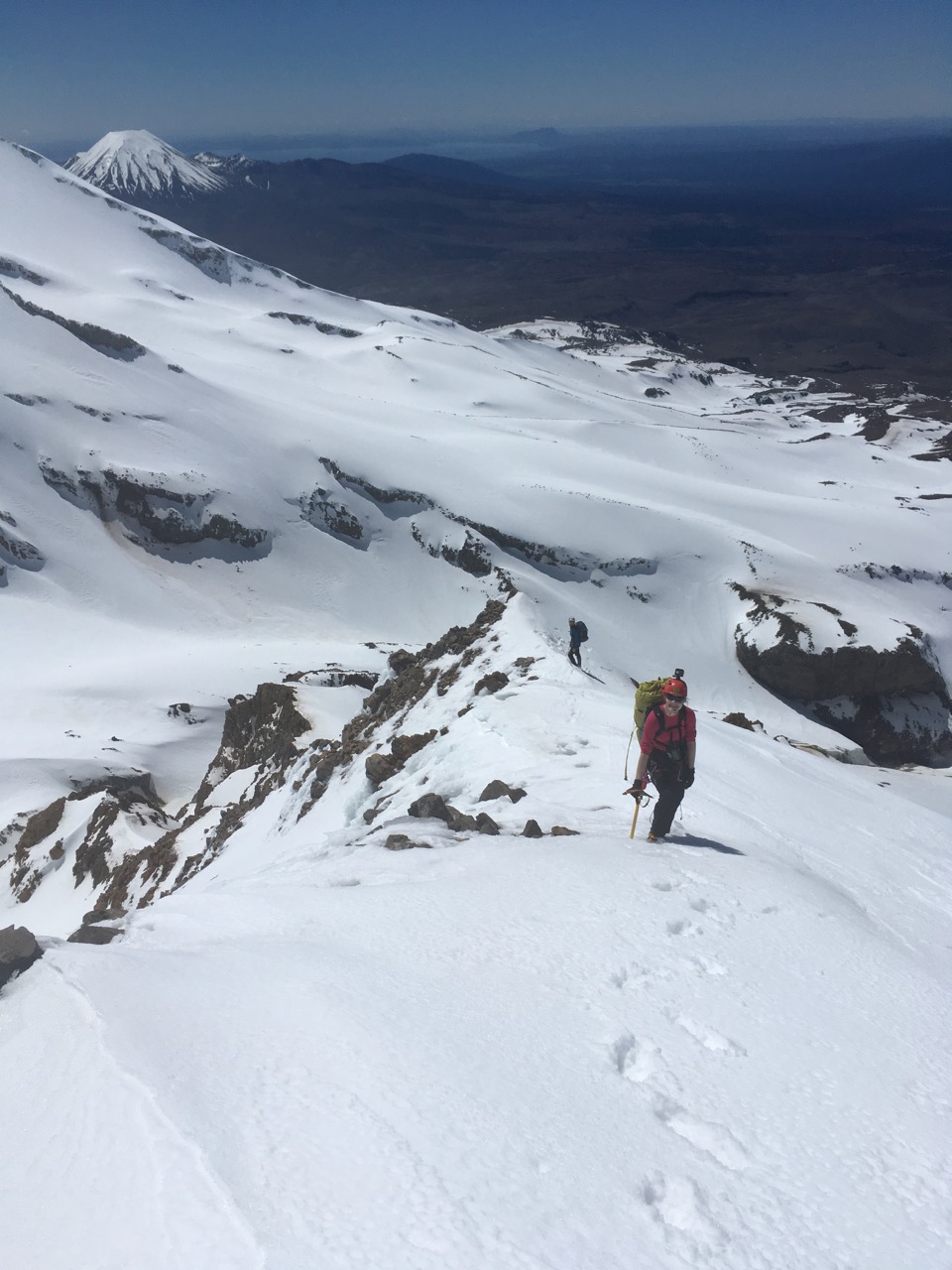 First summit of the day gained, it was now 1:20 pm and we were all in the mood for a well deserved lunch and photo stop. 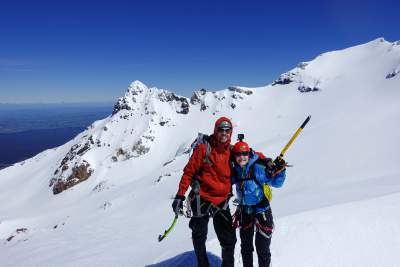 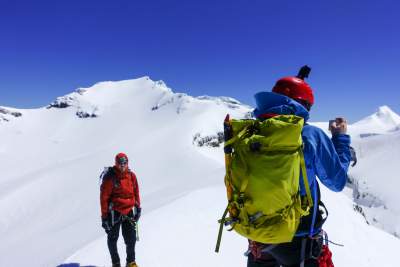 Time was on our side and the wind was holding back so a unanimous decision was made to press on along the Ringatoto – Tahurangi ridge. All eyes were kept peeled for a safe route back down to the Whangaehu valley for our return leg and a good exit point was spotted for use later on. Emboldened by lunch it felt like we were running and in no time at all we had a view of the crater lake. Tahurangi was tantalisingly close now but we still had our sensible heads on and decided on a turn back time of 3 pm in anticipation for the winds we had so far avoided. No time to waste then! 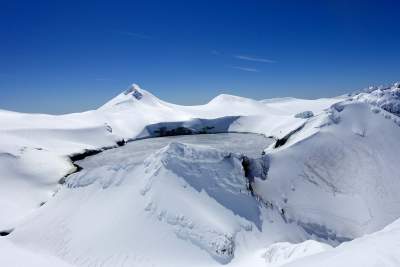 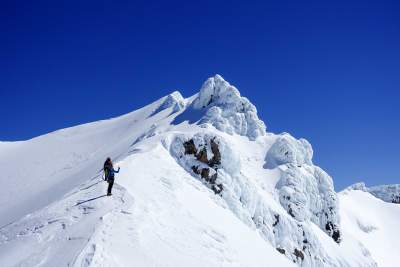 Happily we got there more or less bang on time and we savoured the feeling of being on the highest point in the North Island (2,797,m). Lunch number two and it was time to head back towards Ringatoto to the exit point we spotted earlier. Rather than down climbing the steep and exposed sections we met on the climb up, this time we stayed low and traversed across the Wahianoa Glacier. 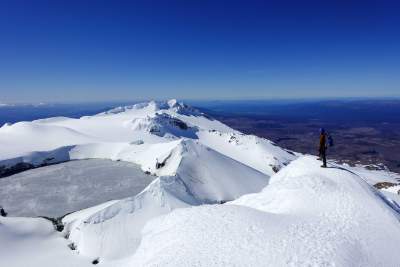 “Safety first”, a snow bollard helped us get down the initial steep section back towards the Whangaehu valley. Conscious that we were now in a bowl surrounded by persistant and large rockfalls this time the rope was even more swiftly and unceremoniously dumped back in the pack and we practically ran further down the valley to get back into relative safety. 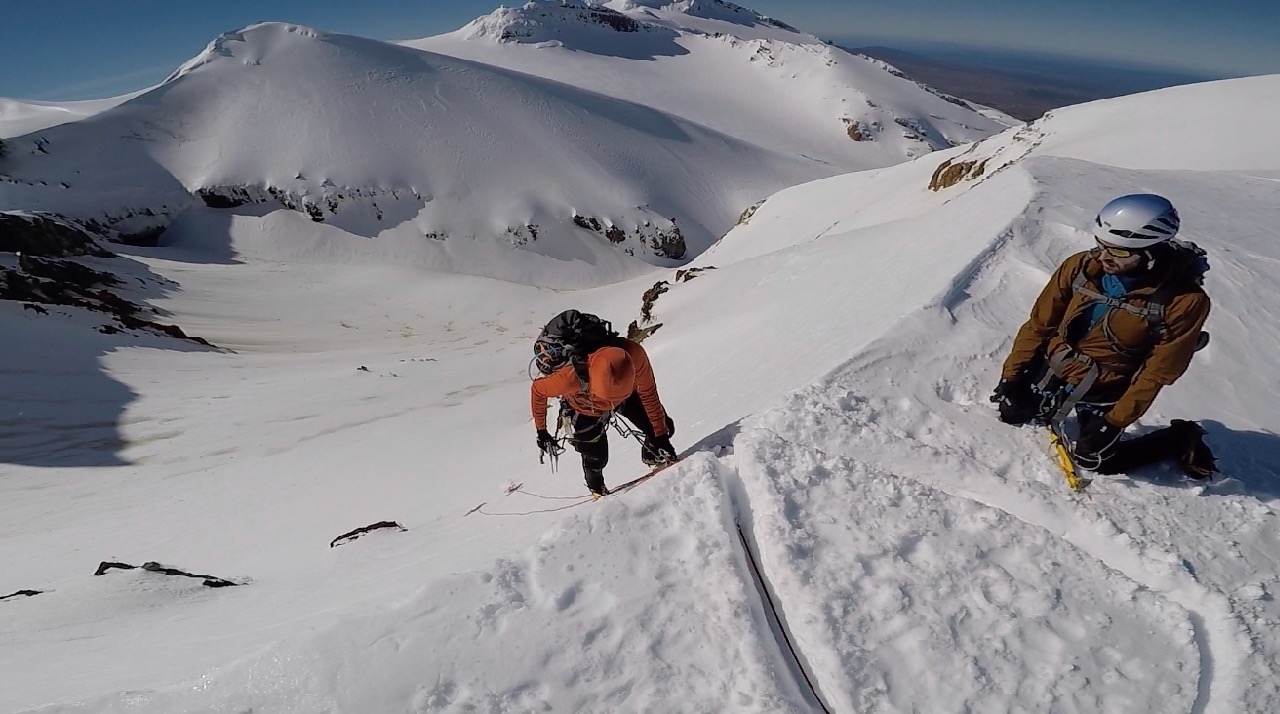 Apart from one big climb back up out of the valley, it was a cruisy and perfectly timed return to Tukino village for about 6:30 pm Not even a twelve hour day, but definitely one that packed a punch and used all the mountaineering tricks we knew. 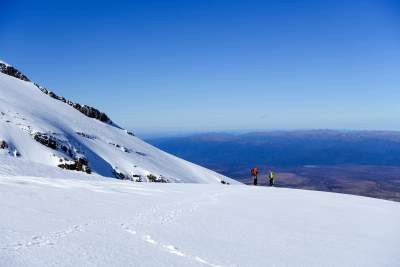 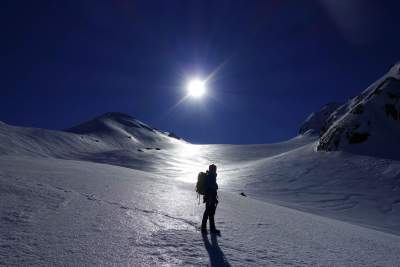 Nick and Elisbet did a great job of go pro-ing throughout the day and here’s their video masterpiece (a trace of our route is at the end of the video):