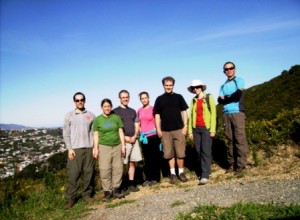 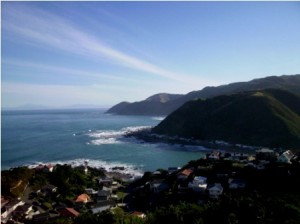 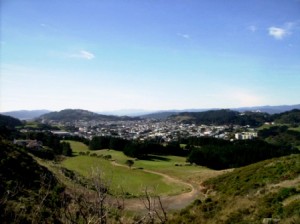 No one can say that it was an ‘early’ start at 10am, but then that is what the City to Sea day walk was offering us, an easy ramble with some sightseeing and chatter for five hours, on a Saturday.

This is a very well known walk, described as a walkway that starts in the heart of central Wellington near Parliament and ends at the south coast, 12 kilometres away in Island Bay.

Surprisingly, even our esteemed leader struggled to find a map of this “popular” walk, resorting to the City Council or was it DOC? Whoever was willing to trawl through their archives to find the much desired pamphlet.

Needless to say, we were all happy for the trivia as we started off from the city, uphill through the old Wellington cemetery. Our 1st highlight was the metal sculptures that sit above the Wellington rose gardens, toi toi, a flax bush, a cabbage tree and what we think was a pohutakawa moulded carefully out of metal, amongst the natural fauna of the botanical garden slopes. Beautiful!

At this stage we wondered if this was really going to be taxing at all, with the sun stripping us of our outer layers, walking through quiet gardens and with sunhats duly donned, could this really be Wellington in April??!!

Like all WTMC walks, there was a considerable amount of chatter as we ambled up the back of the city, stopping for what proved to be the only convenient public bathrooms at the top of the cable car (and a sneaky tourist pic) and then down into Victoria University grounds. Two team members hailing from San Francisco wondered aloud what the true difference was between flatting and living in dorms on campus….ah how to explain baked beans on toast for 7 days for a household of eight students….?

The city to sea walk then took us into Aro Park where we discovered the Tanera Community gardens, still working organic plots that can be hired and to date have about 33 plots with gardeners from around the world finding a bit of peace to grow veges in the centre of bustling Wellington City. 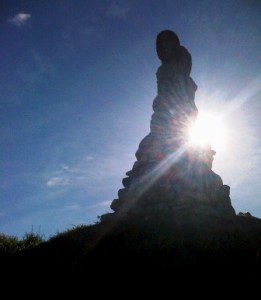 It may sound like it had been all roses so far and actually it was but lunch was well overdue with all that fresh air. To be honest, I think we were lucky enough to choose one of the days that coined the famous phrase – you can’t beat Wellington, on a good day. While we stopped on a small hill to eat our lunch, which conveniently housed a picnic table next to the Scottish Athletic Club, we surmised that it was not even windy…yes a hat blew off the table, quickly followed by the top of a lunchbox – but that’s not even a breeze by Wellington standards!

After lunch, we wound through parts of the city’s western suburbs as we walked through well tendered tracks cutting behind the houses of Brooklyn and Vogeltown and dipped in and out of civilization before another necessary stop for bathrooms at MacAlister Park.

A quick catch of breath outside the Berhampore Nursery and relief as we narrowly missed taking the wrong driveway that would have lead us into the local retirement home (it wasn’t that slow a walk!), then we entered the Municipal golf course (opened in 1915). Not a golfer in sight as we crossed behind the 7th hole and started the first decent trail uphill towards Tawatawa trig point.

How could we not stop on that ridge and take in a breath as well as the views – letting our handy Explore Wellington pamphlet help us to spot Erskine College in the background of Island Bay Parade (founded in 1905 for a Catholic girls college but now used as an art college and function centre) and Tapu Te Ranga Marae  below us (established in 1974, working in conjunction with Te Manawa Karioi, committed to restoring much of the open space surrounding the marae to native bush). Look at that relaxed stance – do we look like this was a hard walk? I don’t think so, but we really got one of the most spectacular days….

Hills, winding up to the next ridge, made the conversation drop off for a while and sugary snacks made an appearance from our day packs  – as we realized that the sun has some heat in it and Wellington is definitely still a hilly city by foot.

At the top of the next ridge we all fall silent as we take in the spectacular 360 degree views. Later, we all commented that this was our favourite spot of the day. Skies so clear that we could see snow on the Tararuas to the north, Tapu Te Ranga Island in all its glory in the Southern harbour, Owhiro bay below us and our eyes could even follow the Interislander on its path nearly right into the Marlborough sounds of the South Island.

The Marae has placed a powhenua (carved post erected to symbolise the relationship between Māori iwi, hapu and the land) on the top of this hill, which we couldn’t resist the temptation to climb up alongside and have our photos taken to prove we made it to this highest point of the walk!

From there it was a downhill walk, with some challenging steps up over the final ridge to finish at Island Bay (settled by Italians and famous for its picturesque fishing boats). We were mostly interested in finding a good café (tick – done, thank you Smashed Pipi) and swapping our personal highlights of a classic day walk across Wellington City.

To anyone who is thinking of doing this walk in their spare time – we think it is a fantastic introduction to Wellington, and really gives a good orientation of the how the city is laid out. Is it challenging? Not really but on a good day, it offers all the fresh air, gentle exercise and escape from the rat race that you could need for one day.

We hope WTMC keeps this walk on their annual list of guided day trips.