After several changes to the original trip plan due to the alpine trips been canned and storms dumping a whole heap of snow along the tops of the Tararuas, a tramp to Waitewaewae was eventually decided upon.

The group of nine, including team sister (Rachel & Sarah) met at the train station on Saturday morning. Driving down Otaki Gorge Road, we came across a damsel in distress in a vehicle stopped in the middle of the road. It turned out the vehicle had a flat tyre. Craig very kindly came to the rescue and replaced the tyre. We then continued along to the carpark so we could finally begin our tramp.

It was a beautiful Saturday in the Tararuas. Clearly the trip leader had being doing sun dances all week to line up such 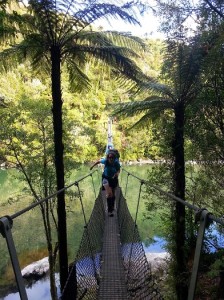 good weather for the trip. At our first break stop, everyone reached into their packs to grab some snacks. The smell of the chopped onions wafted out of two trampers’ packs……..On smelling the onions, Sarah suddenly regretted (and spent the rest of the day regretting) specifically asking for all the vegetables, including the onions, to be brought pre-chopped!

We had a delicious Green Thai Curry with tuna for dinner, which was followed by hot dates! Later in the evening, Sarah tried to teach the rest of the group how to play bananagrams. However, the poor trip leader was pretty sleep deprived from working hard all week to finish an essay so she could lead the trip and it turned out she couldn’t quite remember the rules, so some were developed as the game progressed. Clearly she had still not learnt from her Mt Matthews experience…..third time lucky maybe! 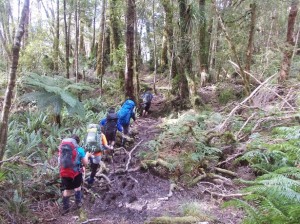 The following day was another beautiful day in the Tararuas and we were to be returning to the vehicle via the same track. Craig, Sarah and myself stopped to look at the remains of the old log-hauler and take some photos, while the rest of the group had continued ahead. 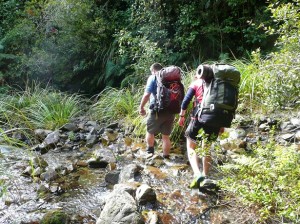 Not long after this, was a re-routed part of the track, which required scrambling through supplejacks. This had been funny on the previous day watching everyone get tangled up in them as the group made their way through them. However, as I tried to negotiate my way through them, I couldn’t find where the orange markers went. So I waited for Craig and Sarah as I knew they would find it easy with their experience. Much to my astonishment, they also became challenged amongst the supplejacks!

A game of hide and seek to find the track amongst the supplejacks followed for almost an hour with the three of us walking around in concentric circles and wondering why it had been so obvious to everyone else where the track was!

We were becoming more frustrated at getting constantly tangled amongst the supplejacks and not being able to find further track markers. Eventually Sarah decided to follow her initial instincts. With the cliff on her right, she took an airwalk straight ahead. Much to her relief on landing, she spotted some track markers, which had been invisible from above. Meanwhile, Craig was busy chasing an animal’s trail (possibly a wombat?!) up a spur to try and find the track! He ended up walking so far up that we could no longer hear him and after much shouting and blowing on the emergency whistle Sarah was carrying, we managed to get him to abandon his hunt for the elusive wombat and return to the track. 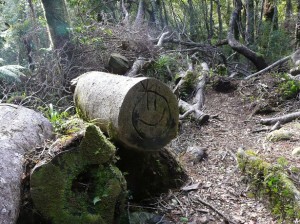 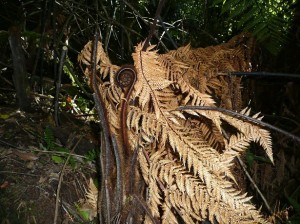 Having re-found the track, the trip leader now feeling rather sheepish, ran ahead to catch up with the group as she was concerned they would be wondering why we had got so far behind. When we eventually caught up with the rest of the group, they were sunbathing and not particularly concerned.

Luckily, the trip leader managed to safely return all of the group to the vehicle from what turned out to be a very memorable trip, especially for some!