This was billed as an easy walk and was probably one of the easiest that I’ve been on in a long time.
Our walk, the second in a series on the Te Araroa walkways began in Shortland  Park right at the end of The Parade down in Island Bay looking out to Taputeranga Island.  The weather was absolutely perfect and sunny.  As we gathered on the dunes looking out to sea, someone remarked that they could see a pod of dolphins out in the bay which we admired as we waited for everyone to gather. 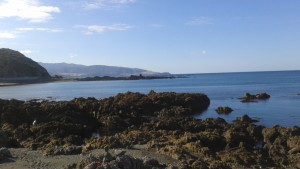 Once everyone was together, we started the walk in typical easy fashion with a coffee from the kiosk across the road from the park.  We then strolled off down the Esplanade towards Houghton Bay looking out at the sunny view across Cook Strait.  When we reached Houghton Bay we discovered that a second pod of dolphins were swimming there.   Everyone stopped and watched as they swam back out to meet the first pod.  We turned up Houghton Bay Road and passed the Meadery.  Since this was a club trip with a no alcohol policy, we didn’t stop for tastings, though I raised the idea.  We climbed up to the ridge at Mount Albert and stopped to admire the views and to wait for one of our punters to deal with a mishap with their water supply and who fell behind us, and then didn’t catch up with us!  Uh oh, we’d lost a punter!  Eventually we got in text contact with him though.  He had taken a wrong turn and was waiting for us at the zoo, which we reached soon after coming down from the top of Mount Albert.  At the zoo, we stopped to watch the baboons and the lone cheetah hanging out. 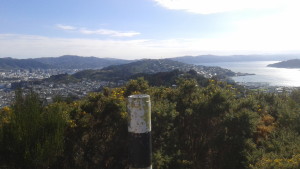 We then left, and walked through the streets and pine trees past Truby King House down to Crawford Road.  It was an interesting variety of scenery going through city streets and then through bush and pine trees.
As we crossed Crawford Road, walked through the bush and reached the velodrome we began hearing engines revving, and as we wandered up past the ventilation duct for the Mount Vic tunnel, the revs got louder and as we reached Alexandra Road heading up to the Mount Victoria summit it was clear that this was a full blown motorsport event!   At some point, a rumour started that the cars racing up Alexandra Road were all Datsuns.  And from what I could see all of them were.  Including the ones that looked like Minis, Toyotas and Hondas…  As it turned out the Wellington Car Club was having a race up to the summit of Mount Victoria, reaching speeds of, we were told by one of the organisers, up to 190 km per hour! 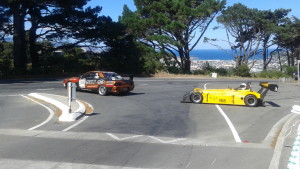 We stopped to have lunch on the hillside and watch the race.  After that we carried on up to the Mount Victoria Summit and admired the views (we were starting to do that a lot).  We then wandered down from the summit through the pine tree and bush clad Town Belt onto Oriental Parade then along the beach where we all decided to stop for ice cream overlooking the inviting waters of Oriental Bay.  We didn’t stop and swim, but kept following the waterfront past Te Papa, across the City to Sea Bridge and then along Willis Street. 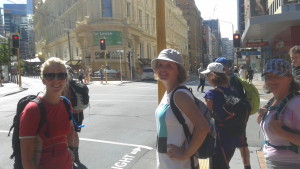 We reached the bottom of the cable car where we debated whether to cheat and ride to the top or walk to the top through the cemetery.  Either way, the plan was to have a coffee at the top.  I had to leave at that point so I waved goodbye,  but what a great walk and a great way of exploring Wellington! It was certainly a reminder of how easy it is to get into the bush without even leaving town.