It was the kind of hot Friday night that cricket commentators call balmy or sultry when our party of five departed on a two day Medium/Fit Dundas tramp.  Our first goal was to get from the road end to Herepai Hut in total darkness. The modern marvel that is the LED light made this a breeze and we were all in bed at a reasonable time.

We awoke to a brilliant still, sunny day. After breakfast we made our way up Herepai and onto Ruapae with Tim firmly in the vanguard setting a pretty impressive pace. Our walk was accompanied by roaring stags that were clearly up for a bit of action judging by their enthusiastic responses to Raymond’s calls. This made it clear that there were likely to be hunters in the area. 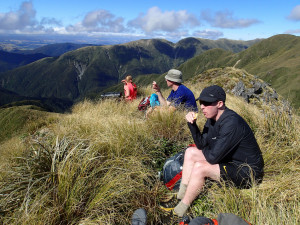 After Ruapae there was a DOC-forewarned but barely noticeable section of erosion on the track to East Peak. The true nature of the walk that appeared here was a significant descent/ascent between East and West Peak and then the same over to Walker.

We stopped for lunch on Walker above a large terrace. We all heard roaring from the terrace and tried to spot the deer. Raymond restarted his booming yet genuinely arousing calls and a rather large stag made itself apparent by moving up the terrace. With the wind to our advantage, the stag eventually came within about 200 metres of our position. It was briefly joined by a smaller male which led to a minor scuffle over who was going to win our affections.

From Walker we ascended Pukemoremore and saw that Dundas Hut was tantalisingly close but alas, thanks to the ridge line, was still the better part of an hour away. 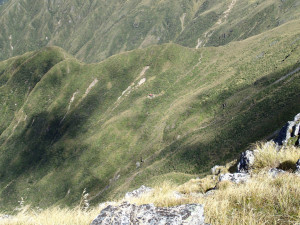 Everyone was at the hut by mid afternoon which meant there was time on our hands for decent conversation, food and deer spotting. Some highlights included:

The weather in the morning had changed to a traditional Tararua blend of thick mist and wind. The walk down from Dundas Hut to the Ruamahanga River was a great mix of valley views, dense forest and tricky sidle tracks. We all took a few tumbles off the track with some more spectacular than others. 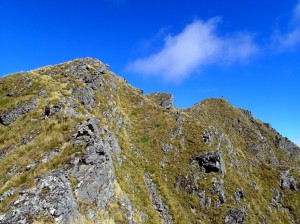 Once at the valley floor we were confronted with the steep,  grinding climb up to Cattle Ridge. This took a bit of effort and negotiation as the cloud and rain really set in near the top of the climb and on the ridge. Our cervine friends were present here as well with their odour very perceptible in the right breeze.

After a brief stop at Cattle Ridge Hut to chat to some hunters and regroup, we descended down to Roaring Stag Lodge for lunch.  The hut turned out to be a no go zone thanks to the inhabitants deciding to have a throbbing hot fire going in the middle of a 20 degree day. 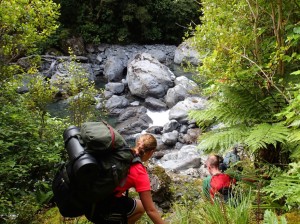 The walk up back to the club van was done at a blistering clip. We ran into some lucky hunters at the track junction weighed down by 80 litre backpacks full of venison.

In the end it was a fantastic way to spend the weekend. There were more deer heard and sighted than birds and bird calls, which seemed a little strange. We only heard one gunshot all weekend which was possibly more unusual given the time of year and abundance of deer.