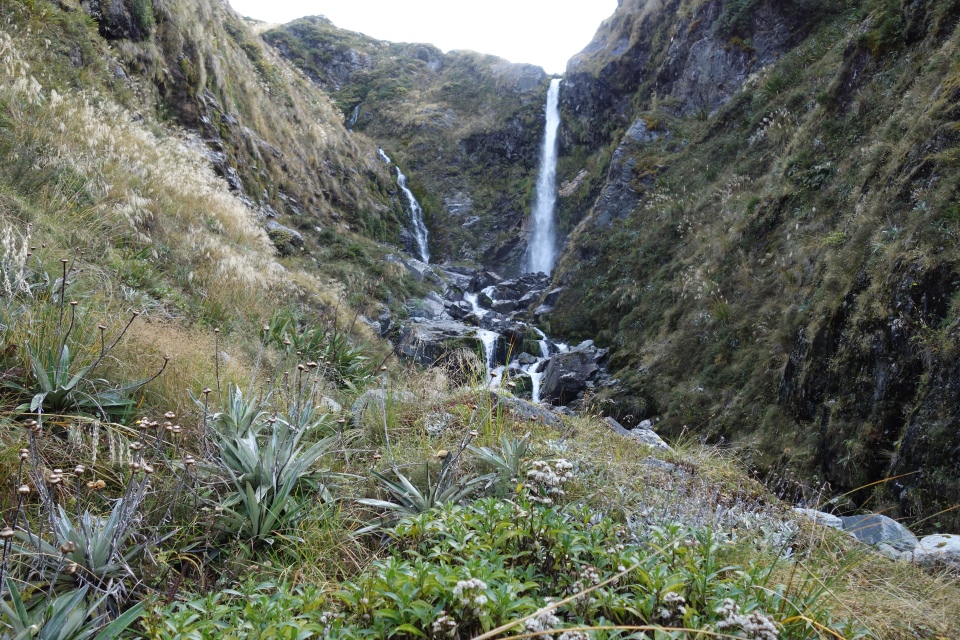 Over Easter weekend I was on a climbing holiday in Takaka and having a very excellent time; and looking forward to a tramping trip over the ANZAC weekend up to the summit of Faerie Queene (a mountain in the Spenser range, just south of the Nelson Lakes).

The plan was simple, head down the St James Walkway from Lewis Pass to Ada Pass Hut on Thursday, stay the night; head up Faerie Queene on Friday and camp on the tops; explore and head in the direction of the car park on Saturday, overnighting in a hut; then nip back out to the car on Sunday to head to Wellington.

However, with just two days to go before I was due to drive down to Lewis Pass I received some disturbing news: the trip to Faerie Queene had been cancelled in favour of sitting in a warm puddle near Lake Sumner. Reasons given were that our trip leader had ruined her ankle on an S-K (in flagrant disregard of my earlier ankle-healing advice, may I add); that Friday’s forecast was for gale force winds and Saturday was going to be so rainy that even Noah would bring his washing in.

Despite all this, I believed that a summit dash and return to the hut in a day was entirely possible, and would keep me out of the worst of the weather. The new plan would be: in to the hut Thursday, up and down the mountain Friday, wait out the rain on Saturday and then head out on Sunday. All it would take was a person of strong moral fibre, great determination and devastating handsomeness (having the weather forecast for nearby Travers Saddle, rather than the Mackenzie high country, would also help). And so it was that on Thursday I drove down to Lewis Pass, and that afternoon I began my walk in.

The walk in from the car park to Ada Pass hut was easy going on the St James Walkway. This is an easy ‘family walking’ style track, with more orange triangles than a Doritos factory. (Track note: you cross lots of very obvious avalanche paths on this track, care and good weather would be needed in winter). Ada Pass hut is a fairly big hut three and a half to four hours from the car park, featuring a wood burner and even an inside tap. That night I shared it with just four other people, last time I walked on the St James Walkway I’d shared a hut with over 40 others! I suspect the hordes had been through over the Easter weekend.

On Friday I was up early and out of the hut at exactly just before 06:30, heading along the St James to the base of Camera Gully. Not keen on getting lost and wasting time crashing around through the beech forest, I just followed the stream up the gully. It turned out that actually the bush-bashing would have been better; the gully was hard, boulder-scrambling, windfall-clambering work, and I started to wonder why I was subjecting myself to this! It took me four hours to reach the Camera Gully waterfall, which was my next major obstacle. My topo map indicated that it was an 8m waterfall over some very steep hillsides, by my reckoning it was at least 10m and the cliffs to either side were very much cliffs. It’s a great spot though and I took the opportunity to check the time and have some food.

From the base of the waterfall, I managed to gain another 200m or so of height but it took me over an hour. There was a steep, grassy scramble on the true right of the stream which bypassed the cliffs around the waterfall and led up into dense scrub. By the time I reached the scrub, I was beginning to feel tired and although it was still early in the day, Camera Gully was almost totally out of the sun and actually quite dark. Since I didn’t fancy climbing down that last scrambly section tired and in the dark, I decided to turn around and head back down a little earlier than I had planned – perhaps 300m below Camera Gully tarn.

Although this last section was tough work and took quite a lot of concentration, (since I didn’t fancy taking a fall on my own, it would’ve been a very boring wait for rescue), it’s fun scrambling if you’re reasonably confident and coordinated and there aren’t too many speargrass tufts hidden in the tussock.

On the way down I came across an almost-track on the true right of the stream, which led all the way to the bottom of Camera Gully. Five and a half hours up, less than two hours back down! The entrance to this track is not at all obvious from the bottom, but it’s ‘marked’ by a bunch of fallen tree bits on the true right of Camera Gully stream. From the bottom of the gully I headed in a straight line until I met back up with the St James Walkway, it really is impossible to miss, even in the bush, and headed for Ada Pass hut.

Having got back to Ada Pass hut earlier than expected, I grabbed some food, then decided to move on to Cannibal Gorge hut as it’s slightly closer to the car park. I also figured that I might as well do as much walking as possible in the good weather, before it turned on Saturday. On arriving at Cannibal Gorge hut I decided that, on reflection, I didn’t much fancy a full day stuck in a hut on my own watching the rain come down, so I went back to the car park that evening.

The sum total of Friday’s walking was from Ada Pass hut to a few hundred metres below Camera Gully tarn, back down to the hut and then out to the car park; roughly 12 hours all told. There was just enough daylight left to drive up to Nelson and arrive at my friend’s house for a late dinner. I reckon that if (read: when) I come back for another go, I’ll definitely plan for just one day from Ada Pass up to the summit and then back to the hut.

So all told, as a summit-bagging trip this was a catastrophic failure; but I think good decisions were made on the day and I proved my “1-day Faerie Queene” theory. And I now know the easiest and quickest was up that stream… With that time saving, perhaps there’d be enough daylight to make it across Gloriana before Faerie Queene… Now there’s an idea for a trip…