After the last attempt to go around the loop was stopped due to bad weather in the Tararuas (how surprising!), some of the punters were more than keen for another shot. Fortunately a good weather window coincided with the trip schedule. Some us were left waiting at the road end ready to go, wondering where the others were. Two hours later, after car problems had been fixed (plastic bag melting around the exhaust) the party walked the gentle track to Atiwhakatu hut for lunch, before ascending the much steeper Raingauge spur to Jumbo Hut. 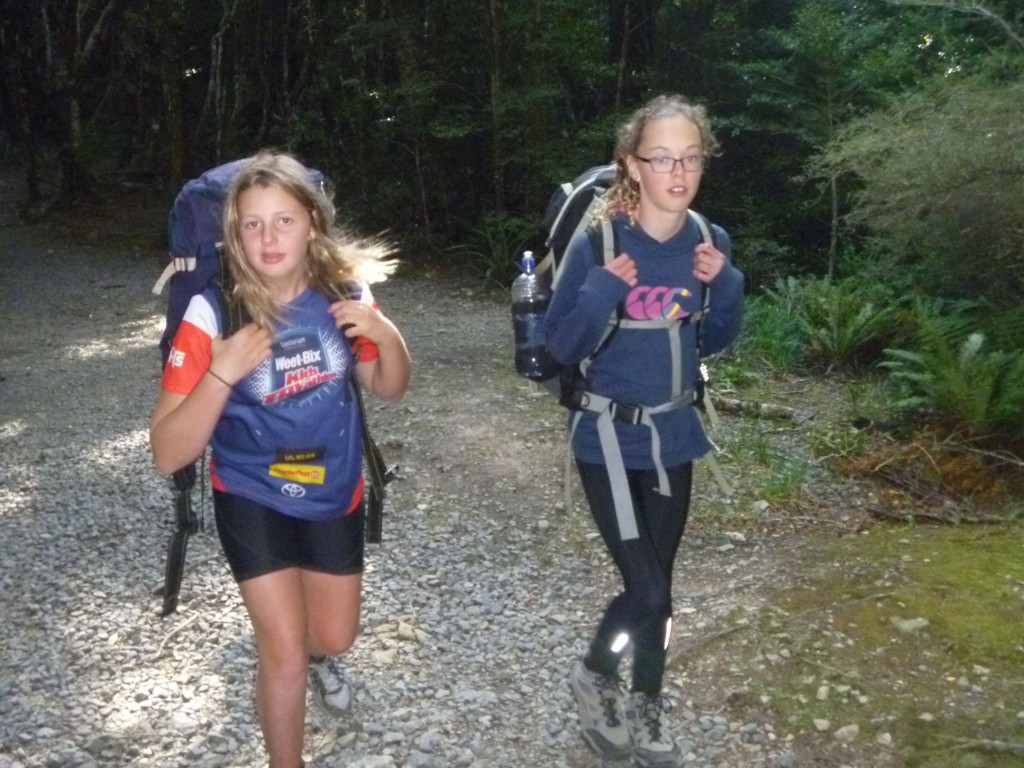 Jumbo hut was made in good time and bunks were claimed. Just as well, as the hut turned out to be overflowing that night with the hut fully booked and a good number of other trampers turning up on the doorstep later on. The online booking of bunks at a hut in addition to where trampers can just turn up on the traditional “first-come-first-served” basis seems to be an somewhat imperfect system. The volunteer hut warden managed to sort everyone out into a bunk or mattress, collected hut tickets and booking slips. Given the recent episode at Waitawheta Hut where a hut was fully booked out but only a small number of the booking actually showed up, our bookings with a reasonable number of youth or “infants” on them seemed to get some scrutiny. 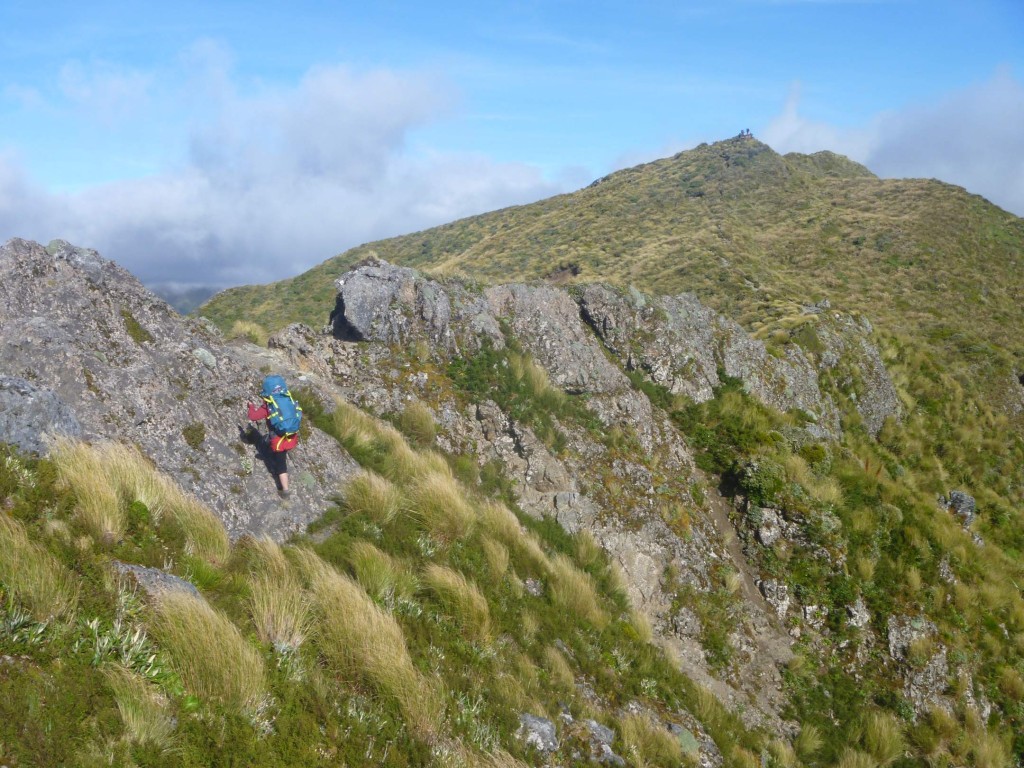 The next morning was fine and breezy with cloud occasionally blowing over the ridge from the inner river valleys. The kids took off in a group together leaving us adults to enjoy our own pace up the hill to Jumbo summit. 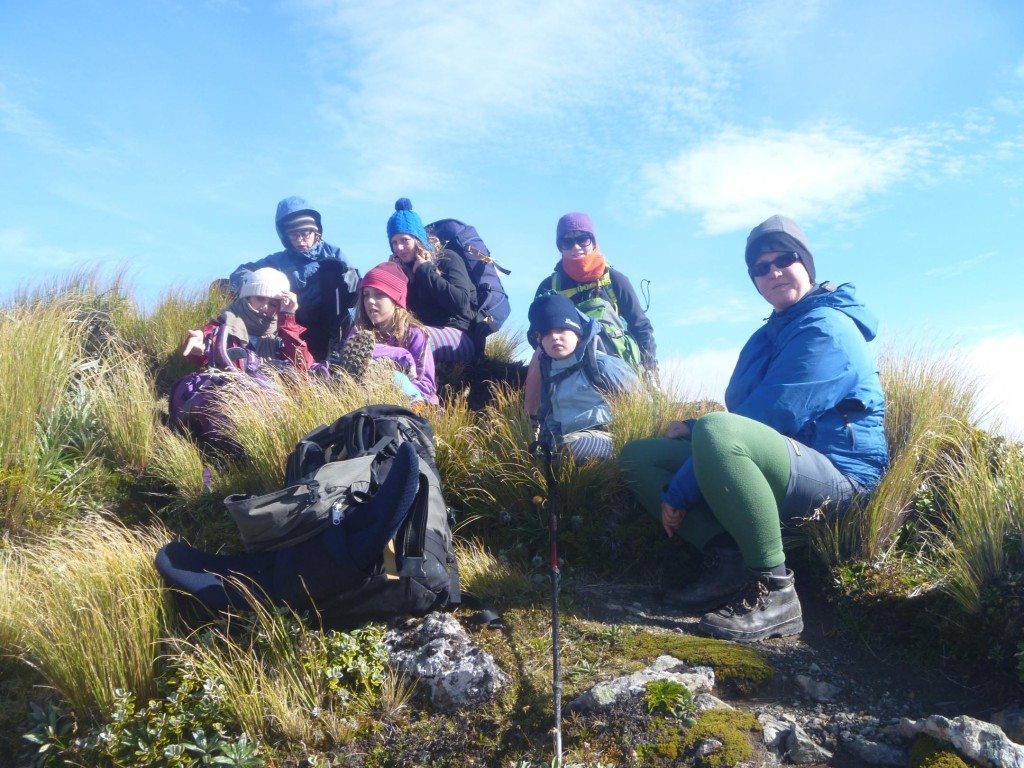 From the top, a fantastic view to both the north and south was possible. One or two thought Holdsworth looked rather far away, not sure of the statement that we’ll be having lunch at Powell hut. 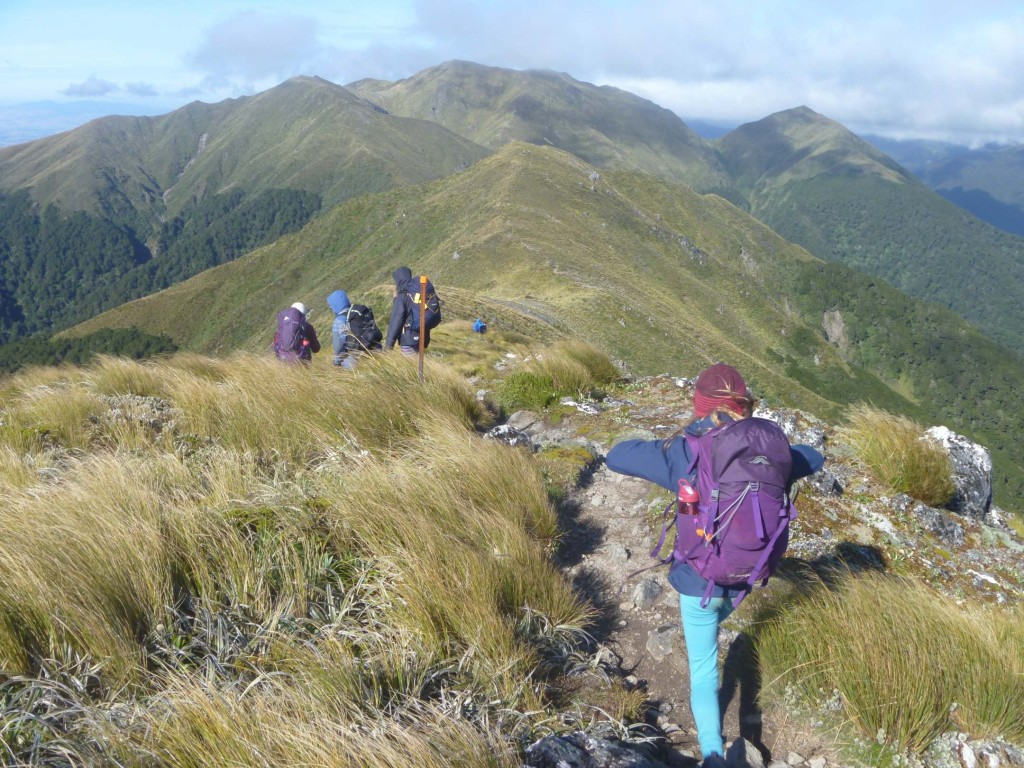 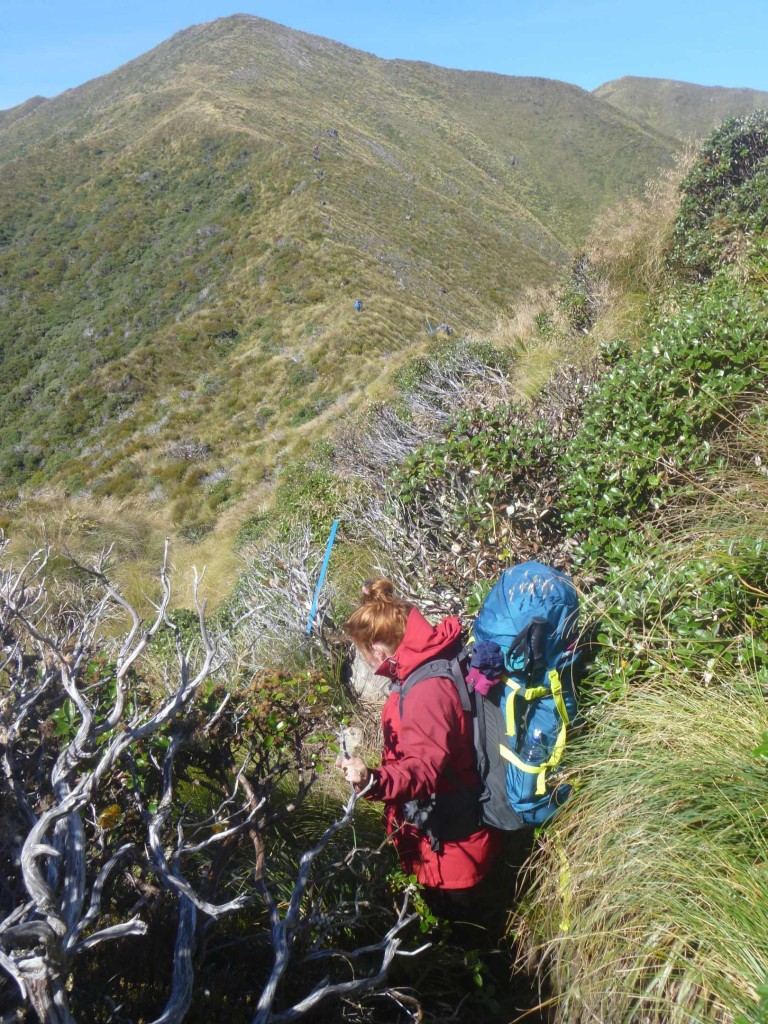 One by one the various bumps along the ridge were ticked off until arriving at East Holdsworth where jackets were donned as we were enclosed in cloud by the brisk cool wind. 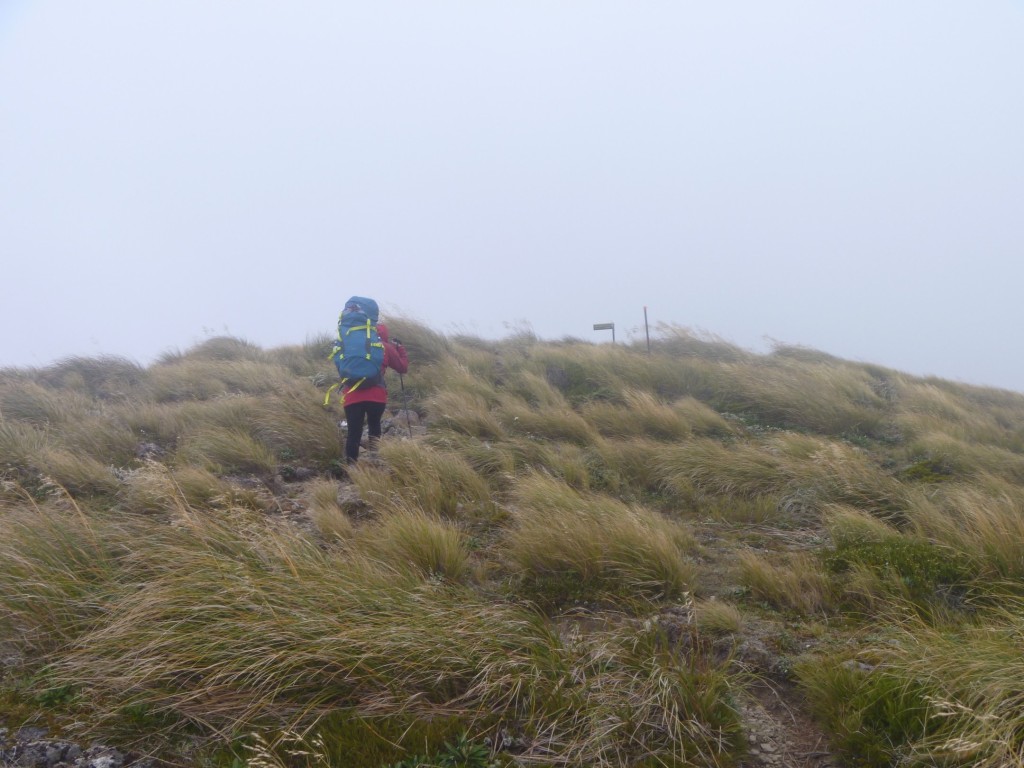 Fortunately the same wind blew the cloud away as we ascended the final climb to the Holdsworth trig. A brief stop to take in the view and to redirect some students from heading to Mid Waiohine back to the intended Jumbo hut. The pace quickened as lunch and an easy track downhill beckoned. At Powell hut a group from the Old Dogs Tramping Club provided entertainment with stories from previous years.
After lunch, the pack of kids charged off down the hill promising to stop at Mountain House and wait for the parents, who were in no hurry, and who preferred to enjoy the sunshine and the multitude of stairs. 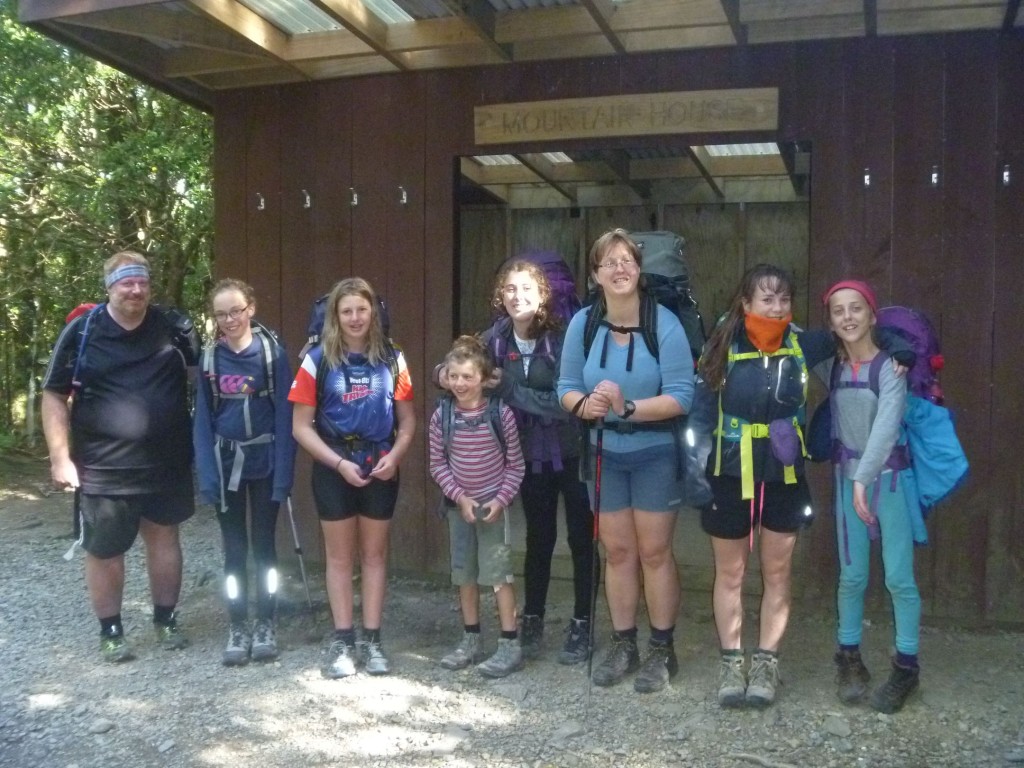 Finally the obligatory climbing of Rocky at the lookout was carried out before the carpark was reached and ice creams consumed on the drive home. 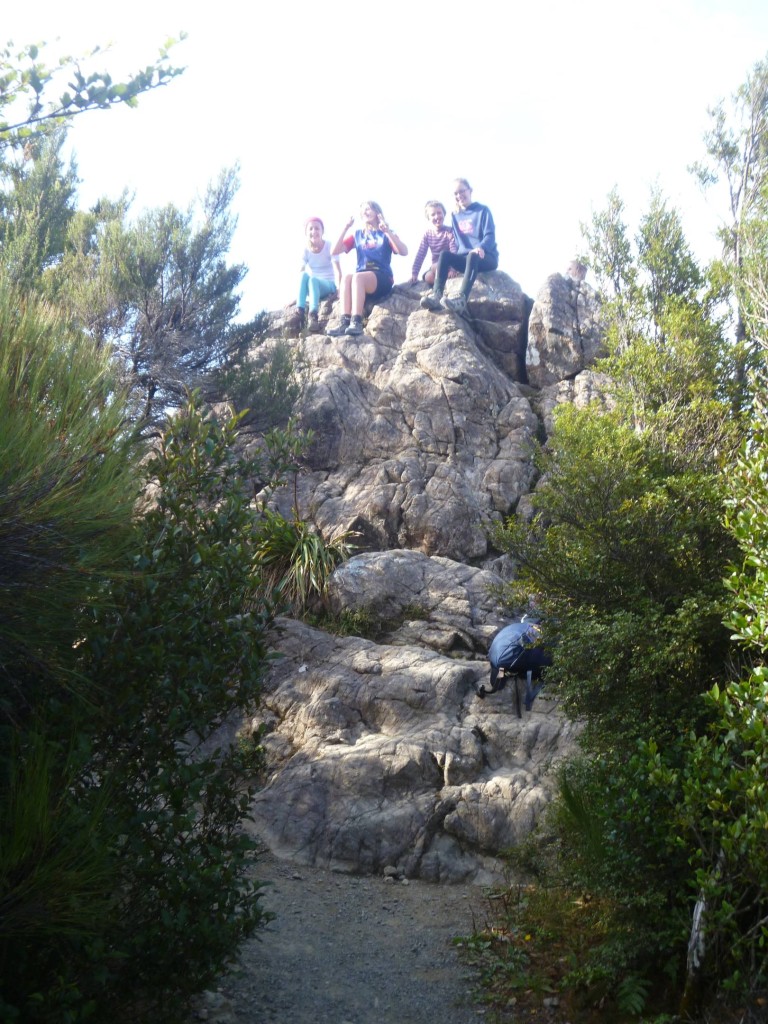