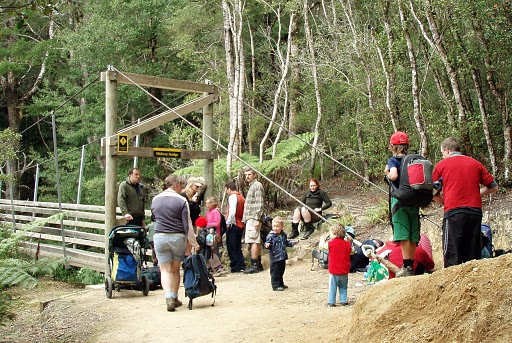 Family tramps work nearly the same as the usual tramping that we all know and love. Early starts, gruelling days through all weathers, getting far into the backcountry – well, we don’t do any of that. Four hours is a long day, persistent drizzle is enough to make us seriously consider staying at home, and our preference is for gentle, flat tracks with a nice hut at the end of the day.

Paua Hut is a perennial favourite because it ticks all the boxes. Close to Wellington, a track in that you can push a baby buggy along, and a great hut that you know you’ll have all to yourself.

Saturday dawned and we were all at the road end bright and early at, well, 10:30am. I’d been promising for months that I’d picked this weekend especially because it would be still, fine and sunny even though we’d be well into Autumn, and so far my predictions weren’t too far wrong. Apart from the thickening cloud, that is. Still, I was quietly confident we’d get away with a fine weekend.

There were 14 of us all up, with 3-year-old kids and 10-year-old kids and all ages in between. We had John, Christine and wee Tom, who impressed everyone with his walking abilities. He never let up even though he was only 4, and walked like a trooper born to it. Constanze, Christian and wee Gustav came along too – they are regulars on these trips and it was good to catch up with them again. Donna came along with her neice Jess (10) and nephew Oscar (almost 8) and Oscar proved great company for Toby. Wendy brought along her son, Matthew (4) and he walked very well too.

The accessibility of this track meant that Wendy’s family (Paul and younger child in a buggy) came too for a day walk, returning to their car about halfway along the track. Ally and Simon came for the day as well.

Christian moved a lot of gear to the hut in the buggy (and Gustav at times too) and Paul and Simon also came with buggies and wee kids in tow. The Paua Hut track is more or less buggy friendly, as long as you’re prepared to do a little bit of carrying in the rough spots. We’ve done this trip in the past where a buggy had been used purely to tote the vast amount of gear that families sometimes seem to need when out tramping.

Most of the kids had backpacks of some sort, with more or less stuff in them depending on their age. We loaded up Toby’s backpack more than it has been in the past. He carried an emergency kit (an icecream container) with a glowstick, drink, chocolate and beef jerky and an emergency blanket. He also had a jacket, a fleece and a jersey for when the snows came. Plus his water (about 2 litres) and his snacking food. And unintentionally, some of my contact lenses in the backpack’s top pocket. I have no idea how they got in there. I heard it told later that he was offering them around at one of the rest stops! At least he was sharing nicely!

We reached the Midway bridge by about 11:40am, which was close enough to midday for an early lunch. We all got our various lunches out. Donna’s neice and nephew had helped make mini pizzas that looked really, really yummy. Ally and Simon caught up with us, too. They’re buggy walkers of old and turned up for the day, with buggy and children in tow.

We all played around the bridge while we ate. There were many trolls and billy-goats to be seen – not just here, but all the way up. Any bridge you went across, you had to watch for a small troll that would leap out at you and threaten to eat you. There was nearly always a bigger, tastier billy goat coming just behind you, so generally you could get away with it.

Before long the Orongorongo river beckoned. Jessie got very excited and in her haste to get there, took a nasty spill. She had cuts and scrapes that needed quite a few of Aunty Donna’s band-aids. She was extremely brave!

The river was was incredibly low – the lowest I’ve ever seen it. We splashed through and headed to the hut.

We have laid down a law with Toby that says if he especially wants something (a book to read or a toy to play with) then he is responsible for carrying it in and out. Needless to say, if a toy is brought along, it is very small. But that doesn’t stop him making wonderful finds on the way, and collecting things to carry. Trouble is, walking down a river, there are many great-looking pebbles, and stones, and BOULDERS, shot through with quartz or other beautiful colours. Toby’s pack was really quite heavy by the time we got to the hut!

Paua Hut was great to see when we got there around 2pm. Three hours in, not a bad pace for small legs. The hut was very clean and tidy when we got there, and the swing outside was very popular as always. The children took turns seeing who could get fastest, highest, and closest to the one big tree that was within range of the swing.

Soon it was pitch black. Some of us were in tents – so Donna, Oscar and Jessie, as well as Toby and Angela headed off to their tents and sleeping bags, after an extra late night, around 7.30pm. The rest of us chatted for a bit, and at about 9pm I headed out as well. I was planning on sleeping in a bivvy bag but the weather was looking dubious so I snuck into our tent instead. The three of us can still fit in our wee 2-man tent, but every year Toby gets bigger and the amount of space gets smaller. There was enough room, just, but the tent quickly got hot and sauna-like. I had to open some tent flaps. Then it teemed and poured, and I had to quickly close them again. (I’d only promised dry days, which was lucky.) But I was glad to not be sleeping outside…

Next morning dawned, and it was Mothers’ Day. I’d carried in some bacon for Angela, and I snuck into the hut and fried it up. So Angela got breakfast in bed. But I think Toby might well have eaten a lot of her bacon.

It was still misty from the night before but this quickly burned off. There’s not much nicer in this world than sitting drinking coffee, looking out over the Orongorongo river outside Paua Hut. We tidied up the hut and got ready to go. But, Christine found that she had lost her glasses! Strange but true! Someone eventually found them – in the woodpile by the stove. Whew. We’re yet to understand how they got there though.

We were off by 10am, and the walk back seemed to go faster than the walk in. Toby and Oscar were chatting away for a lot of the trip back, about the sort of things that 7 and 8 year olds chat about. Bakugan, Pokemon, Yu-gi-oh, Gogos Crazy Bones and Digimon. It’s like a foreign language. We were at the car-park at 1pm sharp, just as Wendy and Matthew’s ride turned up. Perfect timing!

All in all the weekend was another great family outing. It was great to see Donna there with her niece and nephew – I’m positive she got huge brownie points from her sister by giving her and her partner a weekend away. So there you go – if you have a brother or sister with children, take them away tramping for a couple of days. You’ll be their favourite Aunty or Uncle, and your family will think you’re awesome. Win!

If you are interested in family tramps or daywalks – email .