Maarten – We met at the Railway station and introduced each other whilst packing the van. It is always nice to meet new people on the trips.  When all were present we, along with the Easy group, set off up north. After about 30min I remembered what was suggested at the club a week earlier, and I shouted out in the van if everyone had their food. To the leaders relief, they all said yes.

Bulls was our first stop. We tanked up the van and were given 30min to get something to eat.  I still think those kebabs there are great value! With a few people changing seats and new driver, we set off again heading north to Mangaweka. It was dark when we arrived, so with torches we found some nice flat grassy areas to pitch our tents. The tents were up in no time and it was an early night for all in anticipation of a hard first day tramp the next morning.

Kelly – From Mangaweka campground, we made our way to the start of the track.  The Ruahines lived up to the expectation of steep inclines and steep descents.  What a leg workout!  Despite a terrible forecast (which meant we went with the more sheltered plan B to Iron Gate rather than the more exposed trip over the tops to Triangle Hut), the weather held off.  The river even looked inviting as we made our way past.  The 3.5 hours it took to get to Iron Gate hut was filled with gorgeo 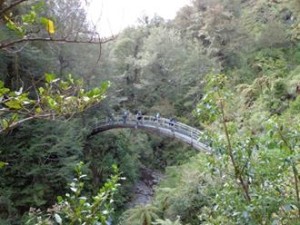 us scenery, great conversation and a few laughs – almost losing Paula and Rory in a puddle of mud that was much deeper than it looked!  Lessons learnt: not to photo bomb everyone’s picture with your bum; that scroggin might actually stand for Sultanas, Chocolate, Raisins, Orange peel, Grains, Glucose, Imagination, Nuts or Sultanas; how to make ceramic toilet; and that if we kept walking, we would eventually make it to the Hawkes Bay!  Thankfully, that is not where we ended up, but at an empty Iron Gate Hut just in time for a well-earned lunch.

Paula – Lunch at the hut made us suddenly lazy and a walk up to the tops less appealing.  But, some of us felt the need to stretch our legs and thought we would chance the approaching bad weather for a view.  Up and up we climbed, Rory, Debbie, Kelly, Maarten and I, taking one giant step up and another. Nearing the top of the ridge we glimpsed snow on the tops through the trees.  Cloud rolled in around us as we reached the top, obscuring the view.  Rain followed, falling in sheets, leaving us all streaming with water.  We watched to check Rory d 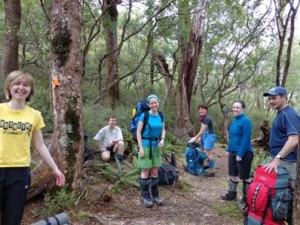 idn’t turn into the threatened gremlin – fortunately not.  We squelched in our soggy boots back down comparing the effectiveness of our raincoats and carefully negotiating the steep bits.

Rory – Well after finishing the lovely descent from the tops where the views were slightly less than spectacular the 5 of us proceeded to peel the wet clothes off. Some of us then headed for the river for a quick scrub. Luckily our smart companions that decided not to go to the tops had started a fire so the hut was nice and cosy. After drying off and putting on some warm clothes, a game of yahtzee was initiated to the soothing sounds of 80’s rock from a contraband ipod that had been smuggled to the hut. Maarten seemed to have the upper hand in yahtzee but was being closely followed by rookie sensation Nicky. This came to an abrupt end when tea (supper) preparations began with chopping of vegies and cooking of pasta. Soon all the ingredients were combined for a delicious pesto, vegie pasta ensemble and scrumptious salami for the carnivores. For supper or dessert (depending on your country of origin), the cup of tea was topped off with an exceptional white and brown chocolate chip brownie cake prepared by Chris,  that was nothing short of the same baked by Le Bordeaux bakery and was accompanied with custard. With bellies full everyone slid into the comfy confines of the sleeping bags with visions of a full house roll of dice and more brownies dancing in their heads.

Chris – Sunday morning started with a conversation about who snored the loudest followed by a quick breakfast and tidy up/hut tickets. We gathered outside the hut to pay final homage with the keener of the group showing off their latest jazzergetic and karate stretches that could be done. Leaving Irongate Hut at 8.30 in the morning, our plan was to meet up with the Easy Party at Heritage Hut. The track roller coasts over the hills and valleys testing both novice and seasoned tramper alike, but, it makes it just a little more rewarding knowing that the extra rations carried in we 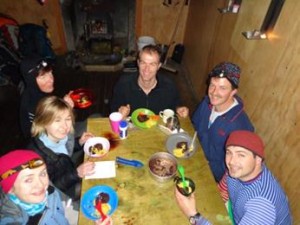 re no longer in your pack. It is reassuring to know some effort from DOC is being made with a number of stoat traps in place. Number of Stoats trapped: Zero. Number of Rats trapped: Five! On reaching Heritage Hut I was filled with mixed emotions knowing that our trip was almost over and wondering if we would have a cuppa made for us by the Easy Party. ”

Nicky – We arrived at Heritage lodge in pleasant sunshine with the recent rain shower evaporating from the deck in steamy wafts.  Minutes later, our enjoyment of the sunshine and the scoffing of an assortment of gourmet lunches (caramelised hummus with lemon and rosemary was definitely a hit) was interrupted by a random torrent of hail stones. Talk about four seasons in one day!  We waited for the worst of the hail to pass before donning our waterproofs and heading back to the van, arriving in another bout of pleasant sunshine. After changing back into warm, dry clothes, we headed to Shannon for a (well earned) coffee/chocolate/cake hit before returning to Wellington; Wellington harbour was at its best…..blue skies and sunshine…..perfect for drying off the gear from a pleasant weekend tramp.