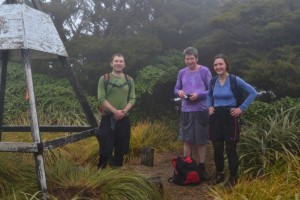 You know you’re leading a trip when the hustle from the Newsletter editor appears in your inbox at the start of the week, and what a good hustle it was! Needless to say, early Saturday morning a small but fine party of trampers assembled to be transported to the eastern fringe of the Tararua ranges for a day trip around the loop. After taking an hour of SH1 travel, we arrived to a quiet road end with only one other car in evidence. A quick change of boots and team talk, and we were off.

Four river crossings in 10 minutes, with the rivers not too high but minding the brown rocks none the less we were at the base of the uphill. Two hours later, we were 900 meters up, nothing really to write home about, but a descent set of tree roots / mini slip just before the bush line and a family of four goats out enjoying the mist too.

Up on the top, even less view was on offer, but we had lunch at the trig point after failing to find the secret hut on the southern right before the trig point.

After the obligatory group photo, it was time to descend along the northern ridge, which seemed to take longer that the uphill. However even after signing the hut book (no one had been through for a couple of days) we still were in danger of a very respectable time back to the car.

After a gentle descent for a couple of hundred meters (vertical), we reached the last major descent of the day. The group slowed down a little but keep a decent pace none the less. At this point, one GPS packed in – backing up the point that technology is not always right, but then a second device proved to be useful in obtaining our altitude. With a couple of minor scrambles, it was back to re-cross the river lots of time, pass a couple of parties heading in to overnight at the hut and we returned to the much more busier road end. Many thanks to Chris for the superb choice of vehicle to transport us there and back.