This was originally an E grade tramp overnight to Renata Hut, however, the first day took us longer than expected so we decided to stop at Kapakapanui Hut for the night.

Over the two days, we walked the Kapakapanui loop track. The internet tells me this is a distance of about 13km. The track climbs to a height of 1102 meters at Kapakapanui high point. The entire loop took us approximately 8 hours. 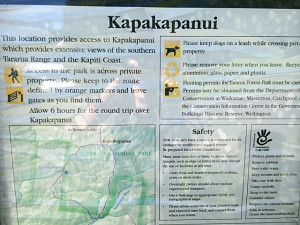 We started the tramp from Ngatiawa Road end, about 15 minutes drive from Waikanae. The track begins by winding through some long grass, over a couple of stiles, and then crossing the Ngatiawa River umpteen times. Maarten tried to keep our feet dry by suggesting we start the track in sneakers and leave them at the last river crossing. However none of us knew or could remember how many crossings there were (and I didn’t bother to count for the return journey), so most of us got we feet anyway. But, as they say in Outward Bound, I LOVE WET FEET.

After about 20 minutes, we came across a junction where we took the left route, leading us clockwise around the loop track. There began-ith a very steep and persistent climb up the mountain, and most of us were huffing and puffing after a few minutes. Perhaps about halfway to Kapakapanui Hut the gradient lessens, and the going becomes a bit easier.  It took us about three and a half hours to reach the hut. 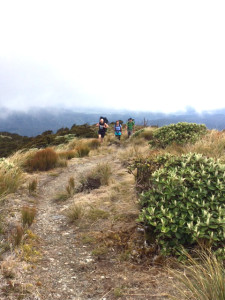 The second day was dominated by cloud and mud. The track continued to climb quite steeply from the Hut for about half an hour. We stopped at the treeline to admire the view before the cloud blew in. It was perhaps another half an hour over slightly rockier terrain before we hit the true high point where we were surrounded by cloud and had no views.

The descent from the high point began with a few muddy patches before we slipped back under the treeline. From there it was relatively easy going, with a few steep patches (although the author does not like down hill, and had jelly legs by the end of it). About half an hour from the junction the descent gets quite steep again. During this time we crossed a funny patch of dead trees that we all agreed should be removed from the track (especially after the author fell in it).

From the junction, Maarten fetched our sneakers while we enjoyed splashing through the river and getting our boots clean. Then it was back through the grass and over the two stiles to the beginning.

We had glorious weather on the Saturday, and of course cloudy weather on the Sunday when we actually wanted to see something. However it was warm both days, and some of us slept outside Kapakapanui Hut under the fly. 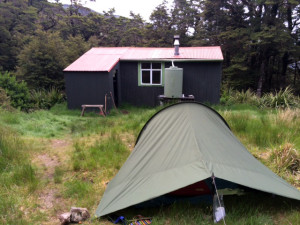 Kapakapanui Hut is a small hut that sleeps six. It had most of the things I have found in other DOC huts – table, bench, sink, water tank and a funny little woodshed at the front. We arrived a fraction ahead of a group of two Welsh and one Kiwi so had first dibs on the bunks. However three of us decided to sleep either in the woodshed or under the fly because the weather was so nice. 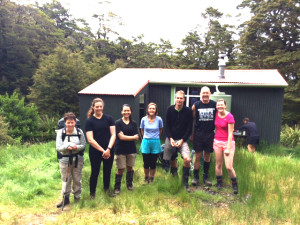 Maarten was the trip leader, and Warrick, Deborah, Catherine, Erika, Caryl and I (Aimee) made up the rest of the group.  Most of us were E grade trampers, so most of us were pretty relieved to spend the night at Kapakapanui Hut rather than pushing on to Renata Hut. This also meant we had the afternoon to play a dice game and cards. Some of the group proved themselves quite devious and competitive at this point, but it was lots of fun. We also got off the track at a reasonable time on the Sunday which meant we could stop for coffee and cheese scones in Paekakariki. That, combined with the great, company made for a lovely end to the trip.