On Saturday morning around 8.15 we boarded our ferry in fine weather, along with a large group of day visitors, for the 10 to 15 minute trip to Kapiti Island. Despite warnings of bad weather brewing we had a pleasant journey. 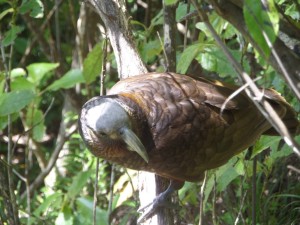 On arrival at Rangatira Flat we volunteers were greeted by DOC rangers Gen and Nick. They were especially pleased to see us because 19 earlier volunteer work trips had been postponed due to adverse weather in November. We were then taken, five at a time, to a special sealed biosecurity room to unpack and carefully check our gear for rodents, insects, seeds, and other unwanted arrivals. The check is taken especially seriously for trampers because of the wide range of places our boots, etc have been. We had been told to have our boots immaculately clean with no traces of dirt or seeds, and to use tweezers to pick debris out of velcro. Everyone had done a great job checking their equipment – all clear of undesirables. 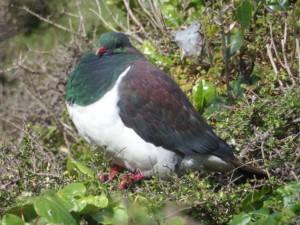 Then we headed to the DOC volunteer accommodation, The Red House, where we stowed our gear in the bunkrooms, had a briefing on health and safety, and filled out some necessary paperwork. Also, emergency procedures such as, if a strong earthquake  triggered the tsunami warning siren, how far uphill we’d need to go to be safe. Gen and Nick encouraged us to go birdwatching during our off-duty hours. They explained about keeping the birds safe, for example, not following takahe into long grass but staying on the paths, and not feeding birds as it could make them sick. The Red House provided such unaccustomed luxuries (for most club trips) as electric lighting, flush toilet, shower, pillows, and a fully-equipped kitchen and comfortable lounge. The upper level balcony gave a great view of the Kapiti coastline and showed evidence of considerable attention from kaka beaks (not the flowering variety).

After the briefing we headed up the 3.8 km-long Wilkinson track to begin our volunteer work. On the way we stopped at a hihi (stitchbird) feeding station and watched hihi and korimako (bellbirds) coming and going. We’d been trailed on the way up by a weka, and a kaka well-known to Nick as Adrian. Adrian sometimes landed on shoulders or backpacks which he attempted to unzip whenever he had the opportunity. After an hour and a half or so we reached the island’s high point, Tuteremoana, and enjoyed the view from the top. 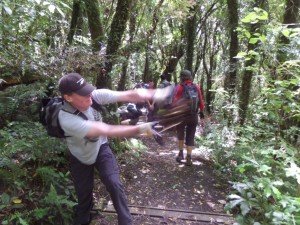 Then it was time to begin our work: clearing drainage channels of leaves and other debris. We donned gardening gloves to manually clear the channels alongside the track, working our way from the top of the island down to where the track begins. One person raked leaves into piles for us to lift and throw on the downhill side on the edge of the track, but mostly we got down on our knees and swept up our own piles of debris. Our group of ten made rapid progress and Gen and Nick were delighted to see the cleared channels. 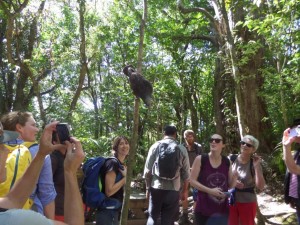 About half way down we ate lunch at a picnic area, and stopped again at the hihi feeding station. By this stage the sugar water had run out. Around 40 birds congregated in a state of excited anticipation, waiting for the feeding station to be replenished. Alas, this wasn’t due to happen until the following morning. Adrian again put in an appearance. A female kaka tried hard to get his attention but he was way more interested in our group and the prospect of scoring some of our food.

Once back at the Red House we were free to relax, look for birds, or go walking on the tracks or the beach. A delicious dinner of tacos, spicy beans, and various accompaniments was followed by Angie’s superb brownies.

At 9pm Gen and Nick arrived to escort us on a kiwi-spotting trip. All torches were set on red light or had red cellophane taped over the light so the noctural birds wouldn’t be too disturbed by the light. We trooped slowly around the lower tracks and Rangatira Flat, pausing from time to time and waiting patiently for a glimpse of kiwi. We heard kiwi calls quite close by but unfortunately the birds stayed hidden. In the absence of kiwi, a group of cave weta gathered on the side of a water tank was the find of the night. Quite tired, we headed to bed around 10.30pm.

On Sunday morning the weather was still nice, but quite windy on the beach. Some rose early to go bird spotting while others preferred a lie-in. It was rumoured that a takahe chick was seen. No such luck for most of us though – the island’s takahe were a pretty reclusive bunch. 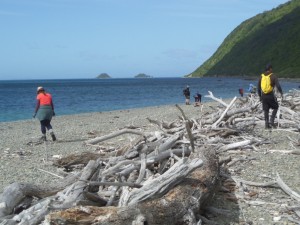 Around 9am, after breakfast, we went to the northern end of the beach to do a beach sweep for any rubbish we could find. Bottles, string, and a large number of pieces of plastic, some rather odd, were collected. Rather than being dropped by careless visitors, most of these things would have arrived by sea, washing up with the tide. After lunch we cleaned the Red House and were free to relax until the boat arrived at 3pm for our return journey to Paraparaumu.

I loved seeing the plump kereru at Rangatira Flat, full of berries and reluctant to fly if they didn’t have to. The hihi and bellbirds at the feeding station were another highlight, as well as the takahe chick for those lucky enough to glimpse it. We also saw beach-nesting sea birds, tui, kakariki, kaka, saddlebacks, and many others. Together with the good company of my fellow volunteers, this weekend was one of my year’s highlights. DOC volunteer work is a really worthwhile way to spend a bit longer on Kapiti Island and experience it’s vibrant birdlife, day and night.