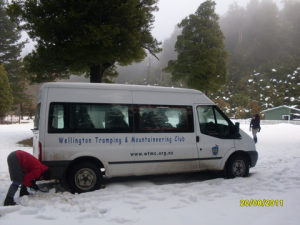 The last time it snowed in downtown Wellington I was too young to dress or feed myself. In the intervening years this ability had only slightly improved, yet I had learnt the basic use of an ice axe and crampons. So off we went all tooled up for the slow drive to the Ruahine’s only a few days after NZ had been hit by the coldest polar blast in recent memory. At least we knew to expect snow, and lots of it.

The drive to Kawhatau Base went smoothly apart from the last kilometre driving through the farmer’s property as the van slid out of the tractor tracks in the snow. Six hardy punters got out to push and through the last gate we went. With the lodge within sight, but the snow now a bit deeper, the van got stuck again and could not be freed so we bravely walked the last 50 metres to the lodge! 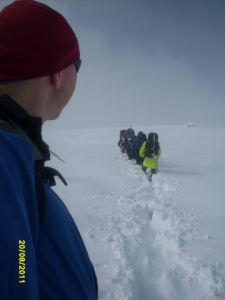 After a good night’s sleep and the advantage of daylight we rescued the van from the snow and turned it around onto a semi-bald patch of ground by a large tree, before packing our gear and heading upwards towards either McKinnon Hut or Crow Hut with the MF group of 5.

Both groups safely crossed the cableway, including Dirk who had some unfinished business with this contraption, and the steep ascent began with heavy packs. The first 200 metres are the steepest of the climb up and was made more difficult in the slippery snow, but fortunately there is good foliage to cling on to, so long as you don’t cling to any onga-onga! Having so much snow around sure made the forest incredibly beautiful and a rare privilege to be tramping in it in the Ruahines. The way that large mushroom-like clumps of snow would form on the leaves and branches made for some great photo ops.

The climb to the bush-line would normally take about 2 hours; however, as the snow became deeper as we climbed, it was 3.5 hours before we made it to the bush-line at 1350 meters. Amazingly there was very little wind blowing on the tops which was a bonus because at this point our speed dramatically dropped even further due to waist-deep snow. Hans was in the MF group so we used his long legs to forge a track through the snow as Hans was also keen to get some training in for his upcoming 10 week trip to Nepal. 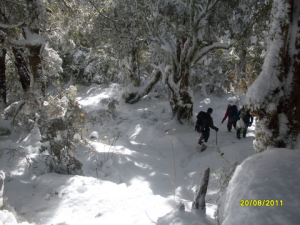 We progressed about 100 metres in the next 30 minutes as we realised walking through waist-deep snow is about as quick as walking through waist-deep cement! With the turn-off down to the bush-line to Crow Hut being about 1.5 km away we realised we were not going to make this distance, so decided instead to enjoy the occasion where we were and play around and take photos for about 20 minutes before heading back down. The descent went smoothly with the odd clump of snow thawing and dropping onto peoples heads, and much caution needed on the lower steeper sections where the snow was now a bit slushier and combined with mud.

Back at Kawhatu Base 7.5 hours after leaving, we unpacked our gear once again, started the generator and enjoyed a good dinner of couscous with apricots, raisins and salami. Dinner conversations included the history of the light-bulb, wattage use of a slow-cooker and Canadian headwear terminology; the conversation briefly got more interesting with talk of airport codes!

Talk of heading up to Colenso the next day was quickly poo-pooed. Instead we took the scenic drive home via Rangiwahia, Kimbolton, Feilding and Shannon. Pete seriously suggested we return via the Manawatu Gorge and SH2 but that idea was consigned to the rubbish pile when we pointed out some basic NZ road geography to him!

Although we only did 1 day’s worth of tramping it was a good weekend with good company, good food and great banter.