Towering high above the alpine village of Porirua stands the magnificant peak of Colonial Knob.

Okay, while it did look like a mountain during the August snow fall, it’s not THAT tall, and neither did the family group climb it in August. But at 450m, it is an honest climb, with magnificent views over Porirua, Tawa, out towards Kapiti Island and the South Island.

Everyone was in an adventurous mood, so we did the mega-loop, starting from Camp Elsdon, we climbed steeply through the bush of Porirua Scenic Reserve.  The path then follows farm tracks along the ridge line to the summit. 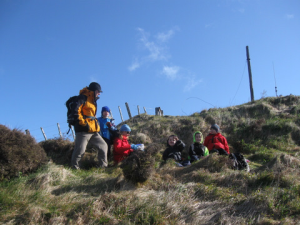 We continued south, following the part of Te Araroa, The Longest Pathway, that heads towards Oharia Valley.  This is further than the “normal” Colonial Knob loop, but is great fun as the path drops steeply through pine forest covered in slippery pine needles.  The children treated this as a giant slide.  Does the saying “leave nothing but footprints” extend to giant bum prints?

The track emerges to a clearing, where we followed a forestry road through Spicers Forest along the southern border of the Porirua Seagull Wildlife Sanctuary (rubbish tip).  This road emerges across the road from Spicers Botanical Park, an arboretum of exotic trees.  Cutting through the park a track follows the side of a man made reservoir surrounded by native bush, through Colonial Knob Scenic Reserve to Rahia Street and Camp Elsdon.

The total loop was nearly 10km.  A great and varied walk, with good company and a fantastic day.