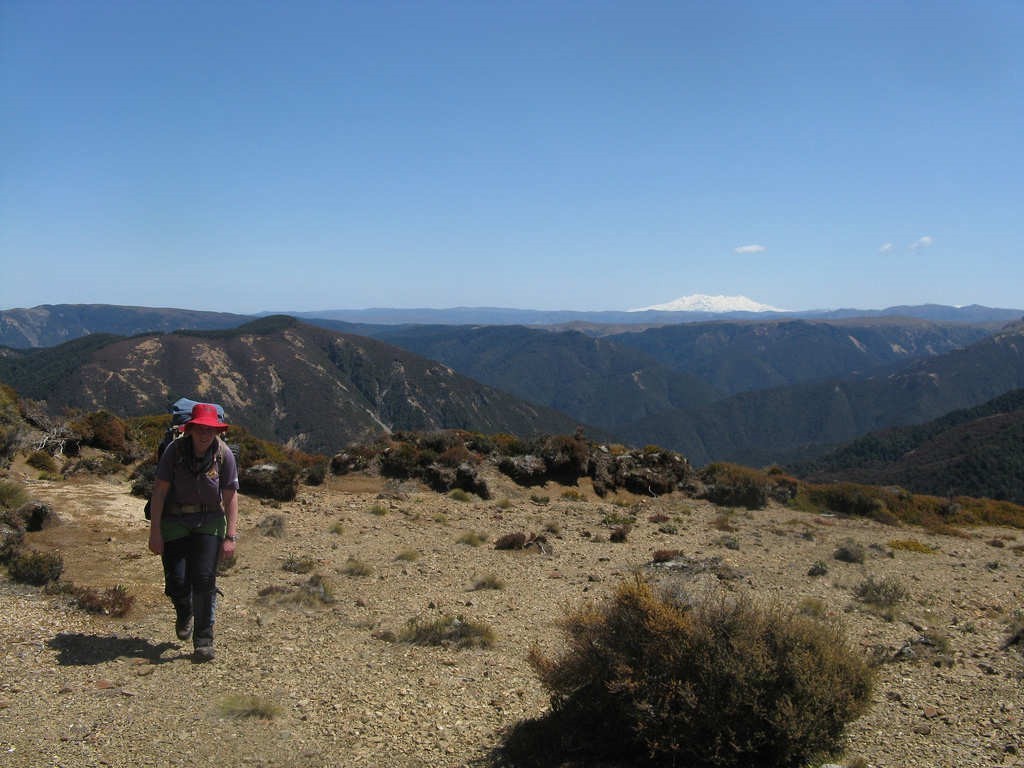 We started out on Labour weekend with a basic plan of staying a couple of nights around
Studholme Saddle Hut, and possibly heading further up the main Kaweka Range during that time. Things didn’t work out that way. For the first time in a long time, at least as far as I can remember, we had three long summer days of sunshine, and ended up lazily following a loop around Kiwi Saddle and down Mackintosh Spur.

Friday night was spent camping at a DoC campsite somewhere near the Cameron Carpark, shared with the Easy/Medium group, which were themselves intending to spend a couple of nights around Kiwi Saddle.

Having packed up from our camp, we hopped into the van, left the other group behind and drove to the Lakes Carpark, making a small accidental diversion to the Mackintosh Carpark but realising soon enough.

The Lakes Carpark leads off in three possible directions. Leaving here at 8.45am, we chose the middle track (towards Kiwi Saddle Hut), which more or less heads due west, then northwest straight up the hill, initially through a pine forest as an interesting change from the majority of New Zealand tramping, and eventually (but briefly) changing to what Rowena identified as a Kanuka forest. We were soon out in the open, hit by bright sunshine, on our way to the first major high point called Kuripapango (1250).

We sat on Kuripapango for a short while, then continued the clockwise walk along the Smith Russell Track towards Kiwi Saddle, with fantastic vistas towards Tongariro National Park, which didn’t really leave us for the entire time we spent on the tops over the long weekend. Despite the nice weather, some small splatterings of snow had resisted the heat, but nothing to cause any hazards. The ridge-line is very eroded revealing a brown clay, and there also appears to be a huge problem in this part of the Kawekas with wilding pines, specifically Pinus Contorta, which is blanketing much of the tops and taking over from what should really be alpine tussock. For parts of the track leading towards Kiwi Saddle Hut, the side of the track has even been sprayed. At 11.40′ish we reached the track junction that leads down to Cameron Hut, marked by a giant signpost, and from here Kiwi Saddle Hut was only about 20 minutes further, much of which was spent cautiously hopping down a fairly steep but wide open area eroding away. 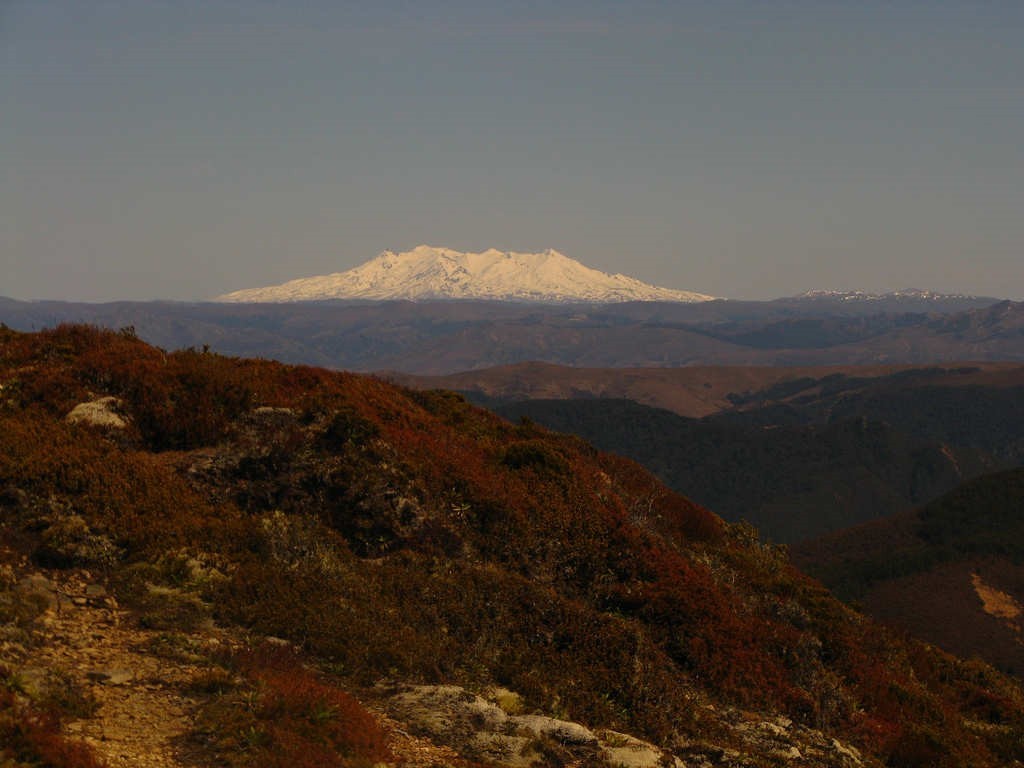 As generally planned, we stopped for lunch at Kiwi Saddle Hut. Having packed up in a fairly lazy way, we left Kiwi Saddle at around 1pm, and went back up above the bush-line into the weed-ling pinus contorta, although it was less obvious for a while along here. Over the next couple of hours, we met four people out for a daywalk from the Napier Tramping Club, and we stopped and chatted for a while. They mentioned they’d already seen three poeple on their way down to Studholme Saddle Hut, and suggested that rather than go there we could aim for a point just below the bush-line on the ridge called Kiwi Camp — a big dug-out campsite with a couple of water tanks, and also a small enclosed shelter. Apparently it was put up by contractors who are intermittently brought in to help control the wilding pines. By the time we arrived we’d virtually decided it was a good idea. Michael L in particular had still been feeling some effects of a cold the previous week, and on arriving I think we stopped and simply never got around to picking up and leaving again.

Rowena pulled out the mountain radio, set up the antenna and we listened in for a while. Rowena reported in as JG39 for the 8pm sked, not reporting anything except a great day, and we listened as AT32 requested assistance for their injured party member.

With another fantastic night, I bivvied out under a tree once again rather than head under a fly. Sunday morning brought some more sad news over the mountain radio, with vague information about someone having been shot dead by a hunter, although details were sketchy.

We resolved to simply go to Mackintosh Hut, making it a cruisy day, but were still away at about 8.30am, quickly out of the saddle (and the bush-line), and standing up on Kaiarahi (1507) within an hour, catching a glimpse of Studholme Saddle Biv to the north along the way.

We began to follow the Mackintosh Spur track down towards Mackintosh Hut. As soon as we were over the ridge, we entered a thick forest of wilding pinus contorta, continuing the theme of this noxious weed in the Kawekas. We pulled out a couple of small ones, but on the scale of things I doubt it made much difference. It was sad to see it taking over so much of the hill-side, but at the same time it offered a different experience from the usual New Zealand bush. The track through this forest is very well cut and, apart from one (possibly two) small rocky bluffs to climb around, is very easy and straightforward. Eerie cairns buried in the pine trees suggest that the area didn’t used to be like this, and was probably much more open and tussocky in past decades before the ugly pines invaded.

After 90 minutes and a couple of track junctions, we reached the bright orange Mackintosh Hut. It’s situated in a beautiful place in front of a swampy stream on a giant plateau of the spur. The hut has 8 bunks, lots of floor space, and lots of space on the verandah outside. Not that it was needed.

Inside the hut just felt quite hot, and I dragged a mattress outside onto the deck, anticipating another clear, calm evening. Rowena copied me, and having earlier set up the antenna for the mountain radio to catch the 8pm sked, she configured it so she could listen for a while in bed and we learned more about the fatal spotlighting incident at Kaimanawa Road Campsite on Friday night. 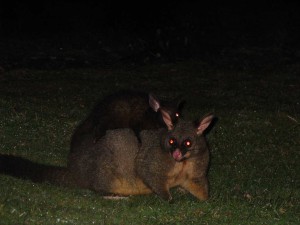 An adult possum with a baby possum on its back scooted past, giving the two of us some entertainment as we tried to get photographs. Something out the front, which later turned out to be a discarded instant soup packet, had gotten its attention. It wasn’t spooked at all by torchlight, suggesting it may have been familiar with people at this hut, generally not a good thing. We didn’t want it hanging around, and on discovering an arsenal of firewood and (especially) pine cones under
the bench next to where I’d set up my mattress, a couple of near-target throws sent it scampering. The rest of the night was fairly uneventful.

Monday morning was yet another excessively sunny day, and we resolved to walk back to the Lakes Carpark with the Easy/Medium group, given we’d be sharing our transport with them anyway. I took a quick glance at the map, and only taking some lazy notice of the relatively flat parts of the route out (skimming over the steep drops and climbs around a couple of rivers) I probably deserved some of the ribbing I later got from a couple of others who’d for some reason trusted my description of the walk out rather than look for themselves. All of us left at around 8.30am, back into the largely Pine weed forest from where we’d come, eventually turning off Mackintosh Spur to head back south-west in the direction of the carpark… which is generally a gentle coasty sidling track albeit for ongoing undulation, and except for the 150 metre drop into (and climb out of) Kaiarahi Creek, the 200 metre climb up towards Cooks Horn Basin (at the site of the old Kaweka Hut that burned down in 2003), and the 200 metre drop into (and climb out of) the Tutaekuri River. So yeah, pretty much flat I think, except for those numerous parts that aren’t.

I finally got wet feet—the first time in the entire weekend—at the Tutaekuri River. A few maps imply that there’s still a wire bridge here, too, but we saw no sign of it. There was no need under the circumstances as it was running very low, and anyone wanting to keep their feet dry was easily able to cross 50 metres further up-stream. From the river onwards, the track sidles steeply but steadily up-hill back towards the parking area. This zone is all pine forest which almost looks plantation, despite being part of the forest park. Rowena and I took guesses, wondering if DoC has a plan to perhaps fell it at a later date when the trees are a little bigger, then use the proceeds to try and fund more effective measures to remove pinus contortis from the rest of the park. However it works, if it’s ever done it’ll be really hard to do.

So with some lengthy stops along the way, we finally stepped out to the carpark at around 12.30pm, with still a generally clear sky above us to top off a calm and clear long weekend. It’s been a while. I hear the Tararuas were one of the few places in all of New Zealand to have had rain this weekend.