This trip was an EM tramp heading for Cupola Hut in the Travers Valley, Nelson Lakes, led by Richard. Six of us signed up for the trip and several of us had been on trips led by Richard before. We were to share the trip with a medium group led by Mike Moore, who were heading on a different route to Travers Hut.
A few days before we were due to set off a cold snap hit the south island and the snow settled at low levels, with John Tait Hut closed due to high avalanche risk. A quick change of plan was made by Richard to do a circuit walk of Lake Rotoiti instead, which shortened our trip by a day and kept us below the snow line. Mike Moore’s group also changed plans along similar lines.
We set off from Wellington on the 8:45pm InterIslander ferry on a cold and wet Friday night. Friends and family thought we were mad given the weather and a very empty ferry seemed to further indication of people’s reluctance to travel. Despite this we had a reasonably calm crossing and plenty of room to spread out and rest on the way.
After a midnight arrival in Sequoia Lodge backpackers, Picton, we woke up to a wet cloudy day and the 12 of us headed in the WTMC van to St Arnaud. However, away from the coast we were treated to glorious views of snow covered mountain ranges set against clear blue skies above. The change in weather lifted our spirits and I was looking forward to starting our tramp.
Our group headed off from the St Arnaud Visitor Centre at Kerr Bay along the road to the western side of Lake Rotoiti. 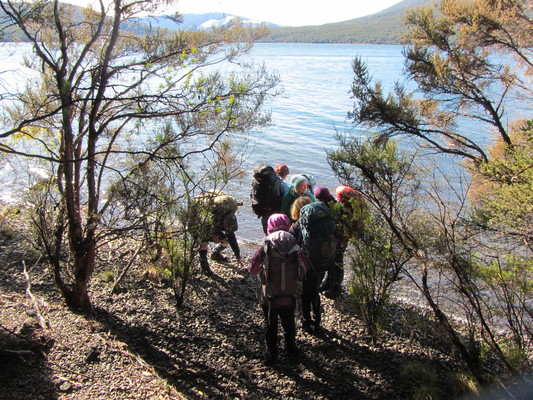 After just over an hour we joined up with the Lakeside track. Our plan was to stay the night at Lakeside hut a further 5 hours walking along the track. Lakeside track was a pleasant, flat, although sometimes muddy walk through beech forest, often getting glimpses of the beautiful lake and surrounding snow-capped mountains. 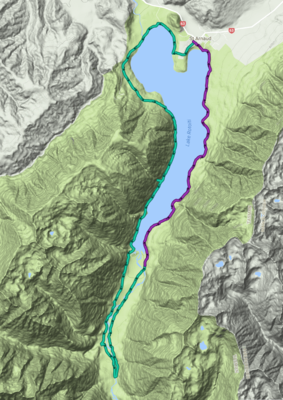 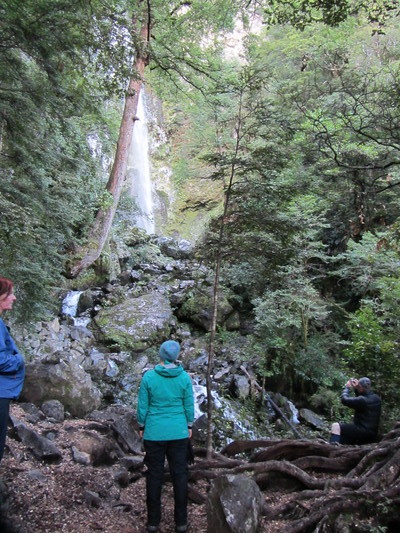 We stopped at Whiskey falls which was well worth the short sharp climb off the track. The falls are 40 metres high and got their name from an illicit whisky still found there in the 1880’s. It was quite spectacular with ice hanging on the surrounding ferns. We reached Coldwater Hut set on the lake edge for a late lunch. It was getting cold at this stage so a hot drink with our lunch was very welcome. After lunch we had a further 3 hours walk ahead of us. Although we could see our destination, Lakeside hut across the lake we would have to walk a further 1 ½ hours to cross at Travers swing bridge. Snowflakes fell lightly and as we walked and we couldn’t resist stopping quickly for a snow fight along the way. 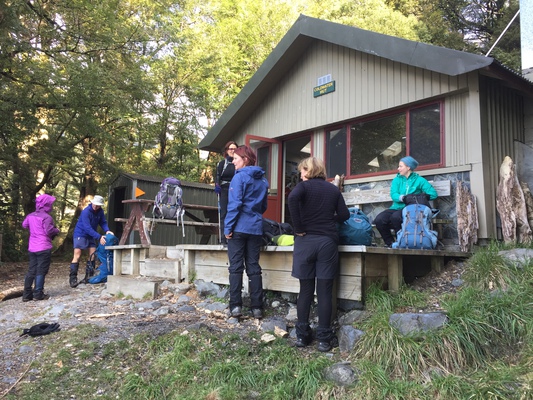 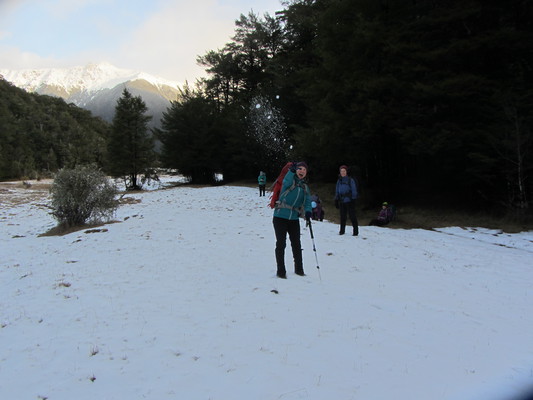 The light began to fade and we walked the last few kms in the pitch dark using our head torches to guide us. Lakeside hut was a welcome site and with the other WTMC group already settled in for the evening, it was warm and cosy.
Our group was well organized with food thanks to Rachael who with some help from the others produced delicious beef stroganoff for dinner. Richard said it was the best tramping meal he has had and it was certainly enjoyed by all. The next day our walk was only 3 hours out to Kerr Bay so we had a leisurely start to the day by sitting down to pancakes and bacon (my first on a tramping trip) organized by Rachael of course! 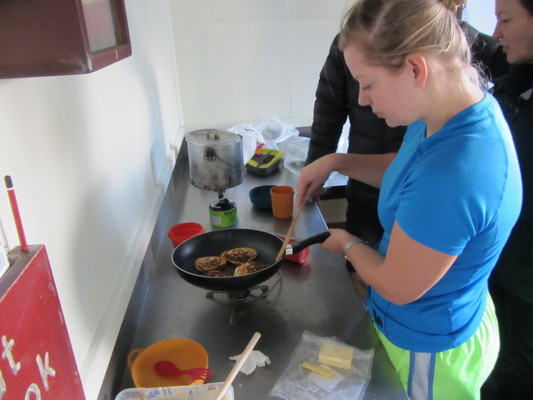 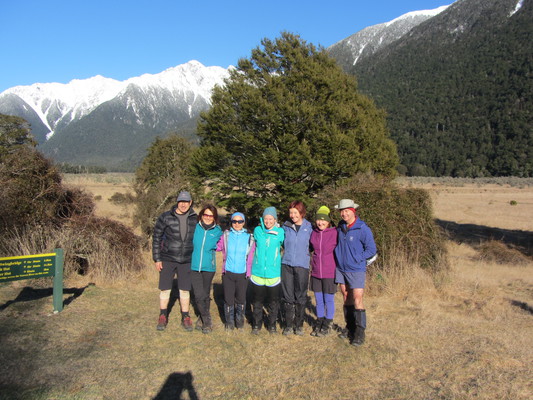 Walking out along the eastern side of the lake we were treated to yet further beautiful scenery and photo opportunities. The lake was like glass and the snow-capped mountains were mirrored in the waters. 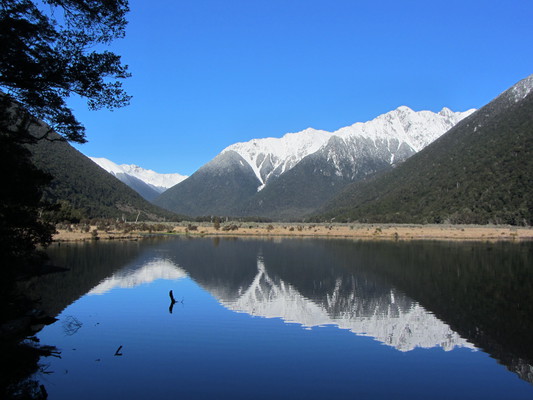 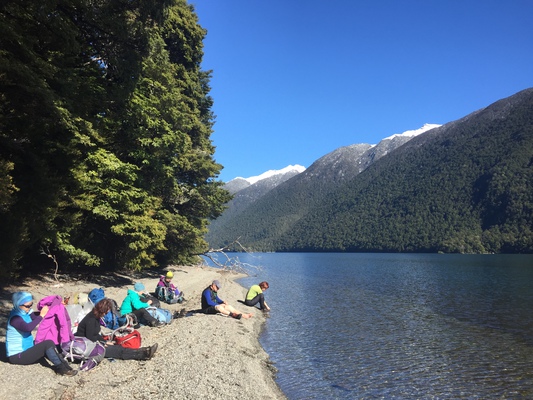 On finishing we had time for a quick coffee at the nearby café before heading back to the ferry and home.
On this trip I found our group was really supportive and fun. We had lots of lively and interesting conversations along the way to take our minds off aches and pains. Richard was a firm but considerate leader, Rachael did a fantastic job with the food, the weather was brilliant and the surroundings beautiful. What more could anyone ask for?
Thanks to all,