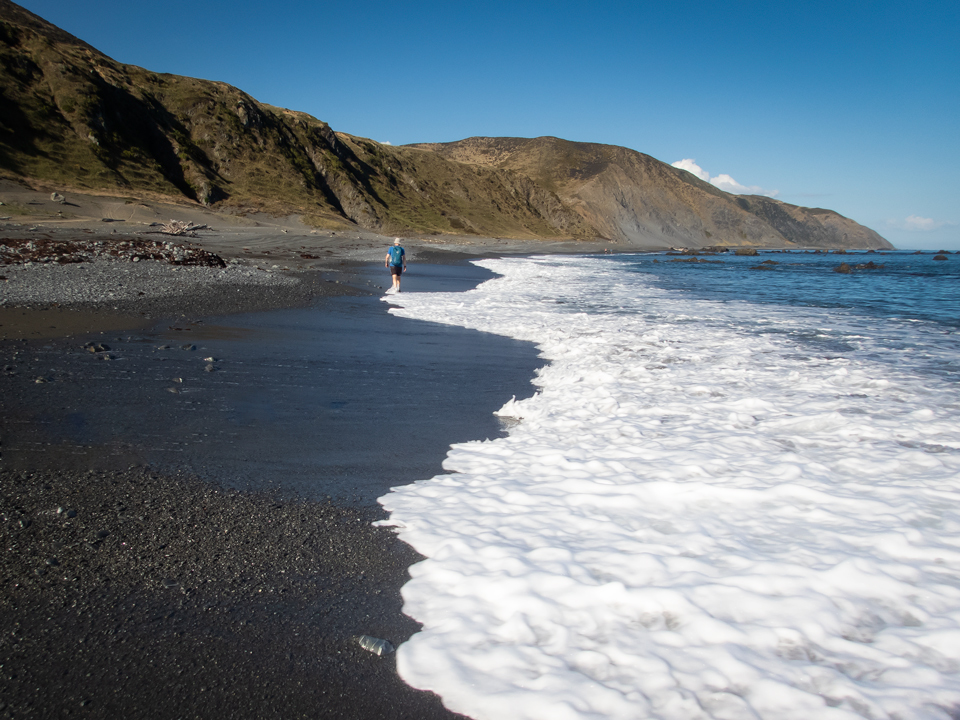 What better on a fine and calm Wellington day than to walk around the coast from Makara Beach to Ohiro Bay. Sarah had suggested the trip, Marie had sort of organised it, and so on a glorious Saturday at about 7:45 am we started off.

And what a great day it was – lots of walking on stony and rocky beaches of course, but there was also plenty of sandy sections, a few scrambles on steep cliffs, one steep enough to need a swim to get past, a clamber down a rope, and a traverse or two in the grass and scrub above some seriously awkward sections. The walk was 11 hours of fascinating travel – with only the last hour along the Red Rocks 4WD road becoming a bit tedious.

We had contacted Terawhiti Station to let them know we were coming and they were happy provided we kept on, or close to, the beach and we didn’t take the shortcut through Black Gully.

But feeling a bit tired at the end of the day no-one was up to offering to write a newsletter report, so instead we have stolen a story that Harry Smith posted on the club forum in October 2014 in reply to a question about the trip. It’s better than anything we could have written so here it is for those who haven’t read it – with our photos and a video added.

This is an interesting walk but it’s a long way and not completely straightforward – it’s a good 10 or 12 hours between Makara Beach and Owhiro Bay (or Ohiro Bay as the locals call it), depending on how fast you walk and what route you take in one or two places. You can do it as a long day walk if you like but it’s also not uncommonly done as an overnight tramp, camping overnight in the Oteranga Bay / Cape Terawhiti area (or possibly in the Ohau Bay / Te Ikaamaru Bay area). People who don’t know the area commonly underestimate how long it takes and get into trouble. I was once camping out at Cape Terawhiti when a rather tired looking day-walker turned up fairly late in the afternoon or early evening having come from Ohiro Bay. He didn’t have a map, a jacket, any warm clothes, or a torch. His face lit up when he saw me and he asked how far it was to Makara Beach, clearly thinking it was just 10 or 15 minutes away around the next corner, and I rather sadly had to inform him that he was only at about the halfway point, with the more difficult half still to come, and it was still another 5 or 6 hours to Makara Beach. (I say I rather sadly informed him but in fact I did it with a certain degree of satisfaction – I don’t have a lot of sympathy for people who set out on such ventures without at least bothering to look at a map!)

If you do this walk, make sure you have a map, a jacket, warm clothes, food, and a torch. You can safely drink water out of most of the streams out there [? TG] but I wouldn’t drink out of Karori Stream, which runs down from Karori and has a sewer pipeline running down it, or the stream at Ohau Bay, which is one of the most intensely stocked parts of Terawhiti Station.

Note that quite a few part of this walk are on shingle beaches, which can be tiring to walk on.

On these beaches there is sometimes a bit of a track at the base of the hillside at the top of the beach, or alternatively it can sometimes be easier to boulder-hop along larger boulders close to the sea at the bottom edge of the beach.

Here are a few route notes. (Note that I haven’t actually been out there for quite a few years since the wind farm went in, so things may have changed in a few places, but probably not much.)

From Makara Beach follow the walkway around the corner to Fisherman’s Bay (Wharehau Bay).

From Fisherman’s Bay to Opau Bay you have two options:
1) follow the shingle beaches around the coast – this is fairly tiring walking on shingle beaches

From Opau Stream follow the shingle beaches around the southern corner of Opau Bay.

The next kilometre or two into Te Ikaamaru Bay is probably the trickiest part of the trip. There are two obstacles to get past. First is a rock rib which blocks travel along the beach. You need to climb up the hillside above it, sidle around, and then drop steeply back down to the beach beyond it. (There used to be a rope attached to one side of this rock rib to help you over it but I don’t know whether it is still there.)  [The rope is still there and usable. TG]

The second obstacle is a few hundred metres further on at the southern end of a shingle beach (through a natural cave arch) where there are impassable cliffs at the bottom of a steep rock rib or spur. Here you need to climb up the rock rib following a steep fenceline for quite a way until you reach a point where you can cross over the rib and descend steeply back down to the beach on the southern side. (A possibly easier alternative is to keep following the fenceline all the way up the spur until you reach the farm track coming down from Quartz Hill and follow that down to Te Ikaamaru Bay.  [By far the easiest way past here is to swim. TG]

It is possible to avoid this stretch of coast between Opau Bay and Te Ikaamaru Bay by ascending steeply up the hillside through scrub on the southern side of Opau Stream, following the farm vehicle track south along the top of the spur until it joins the farm track coming down from Quartz Hill, and following this track down to Te Ikaamaru Bay. If you do this you strictly speaking need permission from Terawhiti Station (and possibly Meridian Energy) but in practice you are unlikely to meet anybody and are unlikely to have any problems if you do. (Note that this route may have changed since the wind farm went in – I haven’t been out there in recent years.)

Te Ikaamaru Bay is a real gem (assuming it hasn’t been destroyed by the wind farm) and is a good place to stop for a swim on a hot day. There are nice shade trees and usually a bit of a sandy beach at the far end of the bay. [Nothing to do with the wind farm but the beach is nowhere as nice as a few years ago – clearly some big storms have taken most of the sand away and there is a massive pile of driftwood the length of the beach. Also cows now graze here and have spoilt the camping area under the trees. A real pity. TG]

From Te Ikaamaru Bay follow the farm vehicle track up over the headland and down to Ohau Bay. Strictly speaking you need permission from Terawhiti Station to do this, but again, in practice you are unlikely to run into anybody or have any problems. (It is possible to follow around the point at sea level on the rock platforms but you don’t want to try this at high tide.)

Ohau Bay is another nice bay but a bit more barren that Te Ikaamaru Bay. There is an open hut belonging to Terawhiti Station in a grove of pine-trees about five hundred metres inland up the valley.

From Ohau Bay to Oteranga Bay you have two options – either follow out around Ohau Point and down the coast, or else cut inland southwards across the saddle and down Black Gully.

If you follow the coast it is a long way on shingly beaches and pretty remote and barren. There are some serious scrambly bits around Cape Terawhiti. In particular there is one bit which is impassable at sea level and you need to ascend a rock rib onto a raised terrace and follow across that before dropping back down to the beach. [Easy enough if you know the way. TG]

Depending upon the time of year you may run into some aggressive seals at Cape Terawhiti. You may also encounter some annoying swarms of flies under some of the damp overhanging rock faces.

From Cape Terawhiti around the southern point into Oteranga Bay you can follow around the beaches by the sea but it is a bit scrambly and there is a short section coming into Oteranga Bay which is impassable at high tide, so a better and easier option is to cut across the farm paddock on the raised terrace and follow the benched vehicle track which sidles into the bay.

The easier and quicker alternative between Ohau Bay and Oteranga Bay is to cut inland across the saddle. If you do this you need to get permission from Terawhiti Station. From Ohau Bay head inland up the valley past the hut, then up the vehicle track up the spur to the saddle. From the saddle follow the vehicle track down the western branch of Black Gully, past the old gold mining battery site at the junction of the two branches of the stream, and out down the vehicle track down the valley to Oteranga Bay. (Note that this area may have changed and there may be more vehicle tracks since the wind farm went in.) [Absolutely need permission for this route – but apart from the old gold diggings it is fairly boring as it mostly follows roads built for the construction of the turbines. TG]

Oteranga Bay (also known as Cable Bay) is a fairly bleak, windswept place in a southerly. The Cook Strait cable comes ashore here on the eastern side of the bay, and there is an access roadway behind the cable station which climbs steeply up the hillside over Mt Misery and follows the hills northwards out to South Makara Road south of Makara Village. There is an open hut in the bay belonging to Terawhiti Station, tucked hard in at the base of the hillside on the western side of the valley about five hundred metres up the valley from the beach.

From Oteranga Bay there is a vehicle track all the way back around the south coast to Ohiro Bay. There are only two possible bad spots. One is at Cave Bay, west of Waiareiki Stream, where the waves can pound up against the cliffs at high tide in stormy weather. This is highly unlikely to be a problem but if it is you can get around on the remains of a raised terrace high up the hillside.

The other spot is at Long Beach, east of Karori Stream, which is soft sand and tiring walking, and again it could conceivably be impassable at high tide in heavy seas in a storm (although I’ve never known it to be).

Depending upon the time of year you may see (and smell!) seals on the rocks at Sinclair Head.

The last 45 minutes from Red Rocks to the end of the road at Ohiro Bay is a popular walkway and you will probably run into lots of people (although this area has really been scarred and destroyed by the quarrying and road building and is nowhere near as nice as it used to be 40 or 50 years ago).