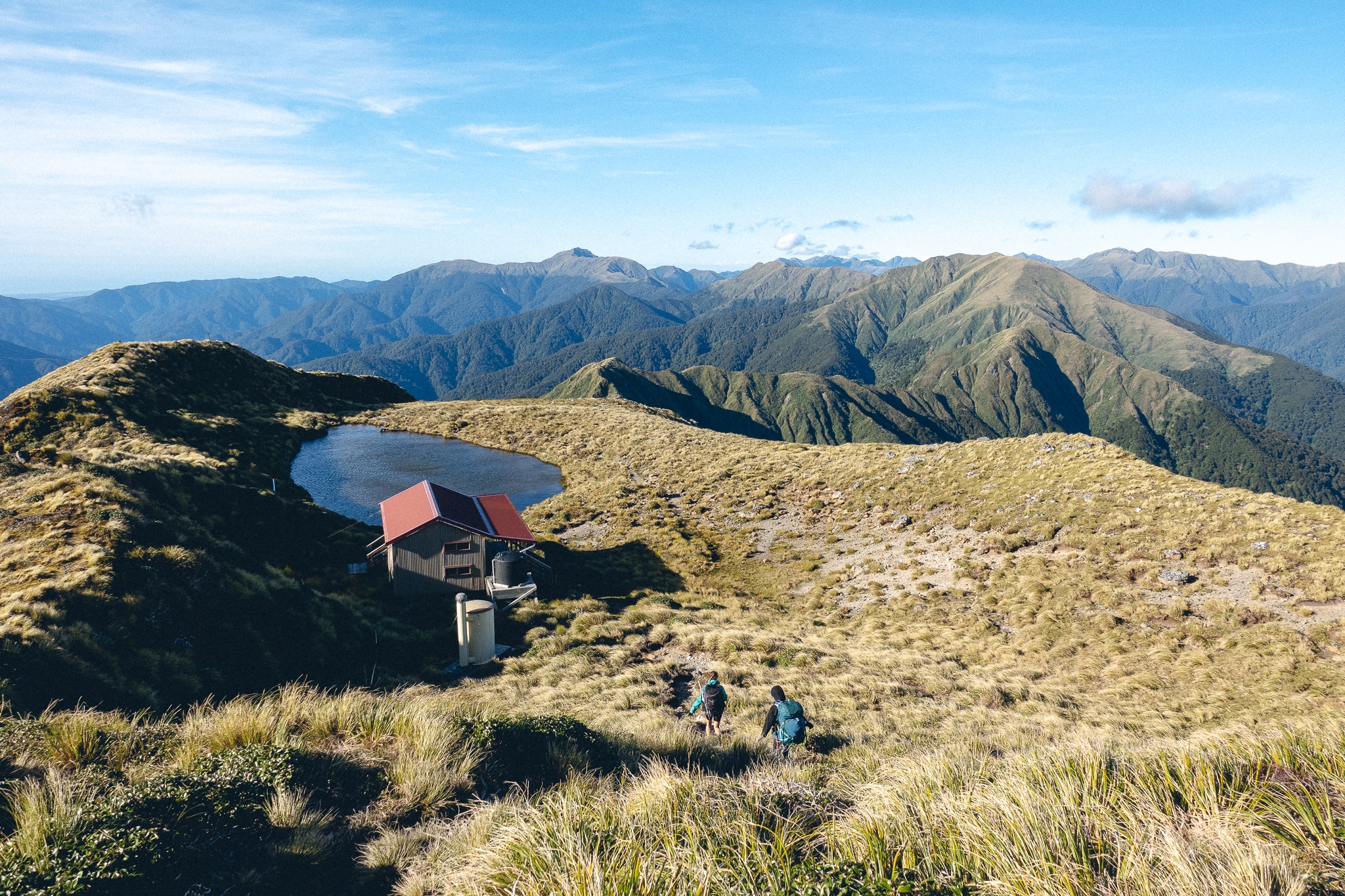 Friday 19 November – Finding fitness and a rest at Field Hut

A stunning forecast had three trampers very excited to try for Maungahuka Hut. Fueled after a quick curry and planning session in Otaki, the group made a speedy Friday night scurry up to Field Hut. While Katie and Jon were conditioned from recent club tripping, Tash was welcomed back to tramping after a 6-month hiatus by Katie and Jon rushing to go to bed. Two of three group members enjoyed second dinners from the comfort of sleeping bags. Knowing they’d be trying for Maungahuka, tomorrow felt a bit like Christmas Eve.

Saturday 20 November – Views, scrambles, and a ladder on the main range to Maungahuka

A mid morning start and subsequent pit stop at Kime was made before traipsing out the main range toward Maungahuka. Overcast conditions and clag played about the high points. The crinkled and craggy range wandered its way into cloud while the blue waters about the coast rippled away in a deep peaceful blue. Sea to summit views spanned a complete 180 degrees from Kapiti to Wairarapa coastlines.

Winds galed as the named peaks of the main range ticked by. The two hours to Kime went quickly, but many breaks were necessary to soak in the views. Overcast turned to scattered clouds turned to full sun. By late afternoon the group closed on Tuiti and a tricky final 1.5 hours’ scramble to Maungahuka.

Trekking poles were stashed away and with careful step after step, hold after hold, the hearty few traversed and clambered. Descending down the infamous steel ladder proved easier than scrambles before and after. Numerous laughs, photo ops, and pauses for snacks amid jaw dropping views kept spirits high. Maungahuka Hut was an incredible reward for three worn and weathered trampers having traveled ten hours. Winds continued to pick up. The three worried about retracing the exposed route the next day. A potential escape down Concertina Knob and to Waiohine Gorge was plotted out in case conditions didn’t turn favourable.

5am, Maungahuka Hut. Warm temperatures in the hut and nerves about the weather made for a somewhat restless sleep. The din of the gas stove promised coffee and enough clarity to assess the weather and the day ahead. Winds that rippled across the hut and range through the night gradually calmed. Returning back through the precarious jagged Tararua peaks, Tuiti and Tunui, looked worth a crack. Sure enough the group found retracing the route through the peaks workable under early morning conditions, despite increasing buffeting winds and some uneasy downclimbing in the trickiest spots. It was a huge relief to be back on McIntosh and into the comparative easy going heading back toward Bridge Peak. The peak was reached around midday, within about five hours of leaving Maungahuka. First lunch was had and the group started chatting up dining options back to Wellington. Burgers? Milkshakes? How about burgers and milkshakes.

The decision was made to skip Kime and push further down to Field Hut for a brief and well-deserved boots off. After a second lunch, boots were reluctantly pried back on and a final push to the car was made. Knees complained and the way down seemed further than was remembered. Katie didn’t believe Jon about a log-shaped bench a third of the way down, but sure enough there it was – missed completely on the way up in the dark. By the time the nicely levelled out ‘expressway’ track was reached, a sprinkle turned into rain. A final snack exchange and delirious joke making kept energy levels up as the group ambled back the final hour to the car. Some eleven hours since leaving Maungahuka, rain began to bucket down just as the car was found. High fives were exchanged – we could hardly believe it but we did it! The elation would keep pace well after the trip as photos and tales were shared. All those years looking at the topo map, chatting up, and trying for Maungahuka and this time we finally made it.