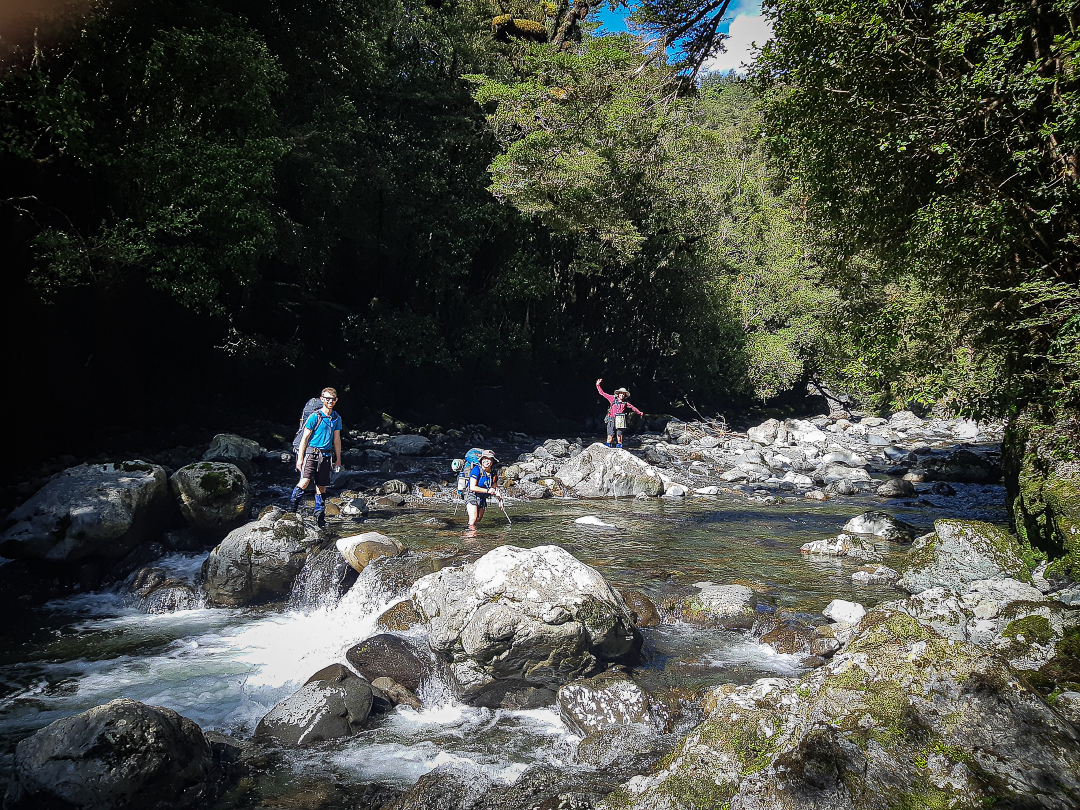 Waitangi Day offered the perfect opportunity to take an extra day off and explore a little further in the Tararuas. I had been keen for a bit of a river trip for a while and decided on the Ōtaki

Our route was Poads Road to North Ohau Hut, over to mid Ōtaki, then along the Oriwa Ridge and out to Poads Road via Waiopehu.

We had a leisurely start on the Thursday morning and a pleasant drive up the coast. On route we listened to Phoebe’s road trip mix tapes. I was keen for another singalong to Tim Minchin’s Canvas Bags, but was sadly overruled.

We shouldered our packs at Paods Road just before lunch time and stopped in the grassy clearing just after the swing bridge to have some lunch. Meredith pulled out some Vitawheat crackers, and so did I. She then pulled out a round of camembert, and so did I. We played snap with salami and with peanut butter. Thinking to raise the stakes I pulled out dried mango, and she countered with home-made dehy nectarine. I couldn’t top this.

The weather was fine and warm and we were looking forward to trekking up river. There hadn’t been much rain in the days preceding and I felt confident that the river would be fairly low. So confident in fact, that I wore my comfortable, but cotton, underpants. I’d been up the river before, and on those occasions the water had been mid-thigh level. On this occasion however, my hubris was to be sorely punished.

We were maybe 30mins from North Ohau Hut, when we came to a fairly deep pool. Meredith and Ben are both taller than me and it looked like they were maybe just managing, or perhaps not quite. Phoebe, the shortest of the group was resigned to it and ploughed on through. I dithered, wondering which route might be best. Meredith lent me her walking poles and I shuffled cautiously round the left side of the pool, the water creeping up my thighs. Then suddenly I was in up to my neck and flailing around to regain my footing. Thankfully it wasn’t too cold and I was soon sloshing my way to the bank. Meredith expressed her disappointment that I hadn’t stayed in long enough for her to get a photo. I rung myself out and we continued on to the hut. I was at least the cleanest of the party, and once at the hut, with warm, dry clothes on, was feeling wonderfully fresh, unlike my sweaty companions.

We cooked dinner, a delicious meal of pasta with vegies and smoked salmon, and then wandered down to the river to enjoy the last of the evening sun. We played a few rounds of Pooh sticks and tried some yoga moves.

The next morning, we headed off-track up the spur behind the hut. We were pleased to find quite a good ground trail as well as the odd piece of coloured tape. Although it was steep, it was not otherwise difficult, and we made the ridgeline in good time. After a few moments of disorientation at the top, we started off, the GPS reassuring us we were indeed going in the right direction. We reached Girdlestone Saddle and had first lunch before continuing along the track to Te Matawai for second lunch. Refreshed, we continued along the track and then down the route to the upper Ōtaki River. Again, it was well marked with tape and we had no difficulty.

The river was beautiful and the sun was shining. I had been warned there may be pools to swim, but in the event, it was all straight forward and I did not do a repeat of the previous day. It was getting towards 6pm as we approached Mid- Ōtaki. The evening sun was glancing off pools in the river and it was all so pretty. We set up our tents and rehydrated our dinner of eggplant with molasses, rice and feta cheese. It was the first home-made dehy I had tried and am pleased to say it was a great success.

The next morning was cool and misty. The threat of rain drove us from our sleeping bags. We packed down our things and started off. Our route took us up the spur to Oriwa. Again, there was a bit of a trail and we made it to the top without too much trouble, though still with a fair amount of huffing and puffing.

Once we got to the ridgeline though, the going got a wee bit harder. We had a few turns we needed to take and often the ridge was wide and ill defined. The mist was also thicker and it was almost raining. The wind too, was wild in the treetops. Through some sections there were a lot of fallen trees. It was hard to keep to anything like a straight line when we were climbing over and round and through fallen vegetation and going around to avoid hollows in the ground or patches of particularly thick growth. Everything was dripping in moss. At one point we started veering off course, and I had to turn us around for a short distance, before we were then able to head off again on the correct vector. It was too cold to stop for more than a snack, so we crammed what we had handy in our mouths and carried on. It was an exciting moment when we rejoined the track.

It felt luxurious to arrive at Waiopehu Hut, have a hot drink and an extended late lunch that rolled over into an early dinner. We did the quizzes in the BackCountry magazine, played a few rounds of cards and enjoyed another successful home-made dehy, this one, chilli beans, prepared by Phoebe. Later in the evening, the clouds began to clear and we could see the lights of Levin.

The next morning was fine and we ambled off down the track and out to Levin for lunch. Throughout the trip we had been taking bets on how many people we would encounter each day and how many we would share the hut with. Each day our bets got more specific and creative. It wasn’t about guessing something mundane and likely (although, just for the record, I did guess the correct number of people in the hut on the Saturday night), but about imagining possible, but unusual scenarios. Phoebe’s prediction for our final day was that we would see one TA walker carrying a chicken. As there is a farm at the road end, this was technically possible, but on this occasion, remained an unfulfilled prophecy. Maybe next time.