This was listed as an Easy-Medium (EM) tramp, so we decided to begin on Saturday morning, rather than Friday night, because there is nowhere to camp at The Pines road-end. Some people also highlighted that they were not experienced trampers, and so I didn’t want to risk a long night-walk to the hut.

I made it clear before we left Wellington that it was possible we wouldn’t be able to summit Mitre as it was a lot of ground to cover for an EM tramp, and the weather showed signs that the ridge-tops might be a less than ideal place to be.

Despite average weather, the group started with great enthusiasm and we covered the first leg to Mitre Flats in 3.5 hours (DOC suggests 4 hrs), including plenty of breaks. The track for this section is well used, but is a typical ‘up-n-down’ track for the Tararuas, with plenty of roots, some minor slips and tree-falls to negotiate. We did see some Kereru and a Kaka at one point, but otherwise little in the way of bird life. 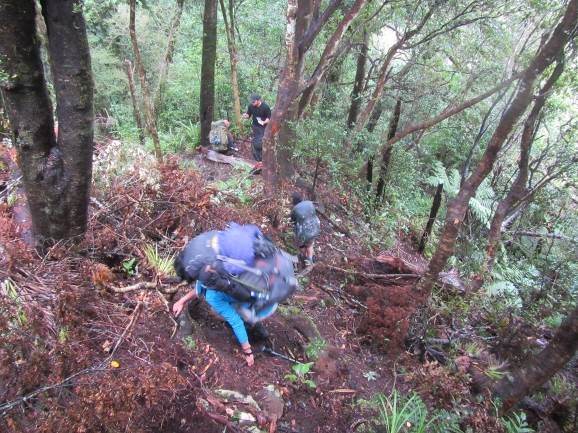 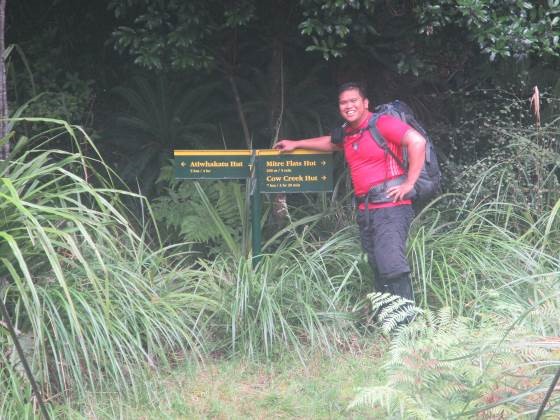 We lunched and dropped most of our equipment at Mitre Flats hut, before beginning the long climb up Mitre from there at a decent and steady pace. There was a light rain that had been coming and going all day and it was getting less muggy as we climbed much to our relief. It was a treat to be able to walk this section without full packs as we knew we’d be returning to the hut below, and the swirling mists looked lovely through the mossy trees. 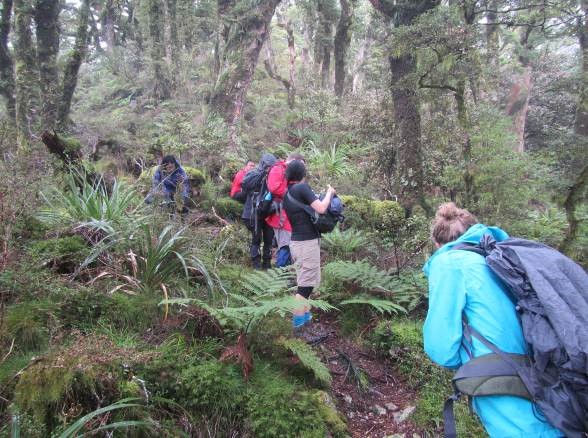 As we climbed, the steep track began to take its toll on the group, and by the time we broke the tree line some people’s body language highlighted their weariness. It hadn’t helped that we had to negotiate a wasps’ nest right in the middle of the path, and several people were stung, but seemed okay to continue under watchful eyes! 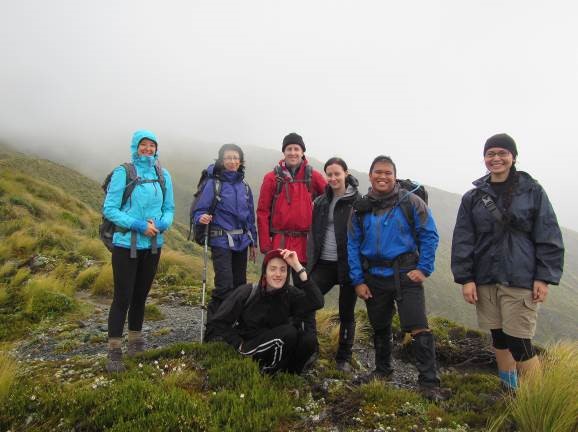 We reached the knob at 1,330 m at around 4 pm, and discussed that to achieve the summit at 1,570 m it would likely take up to another hour (estimated at 20 mins per 100 m altitude gain with day-packs, plus extra for tired people!). The clouds were coming and going around us, but we could see the clouds obscuring the summit weren’t shifting. So, we made a group decision to turn around. 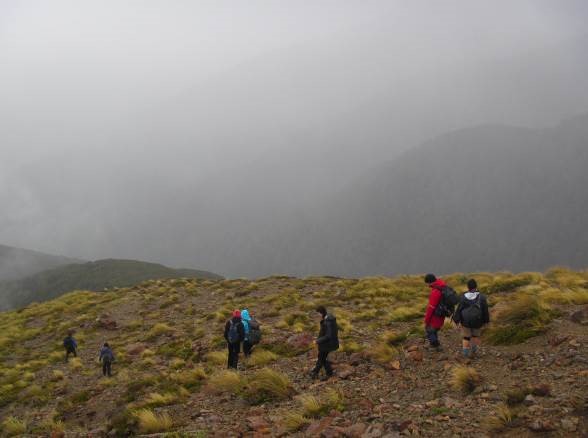 This made the descent very pleasant (apart from even more wasps) and we got back to the hut at dusk in good spirits after a long day for an EM trip. We all agreed that 1,330 m was a very respectable achievement for a day’s walking!

Dinner was delicious and everyone pitched in with prep and cleaning. Dan’s generous heart made sure that we had more rice than the Orient, and some hunters had caught a delicious fish that we all had a taste of before drifting into a deep sleep.

The second day we returned the way we had come along the Barra Track, and the sun came out just in time for cruisy lunch and sun-bathe by the Waingawa River. Duncan bravely came for a swim before we left, while the others all chickened out! 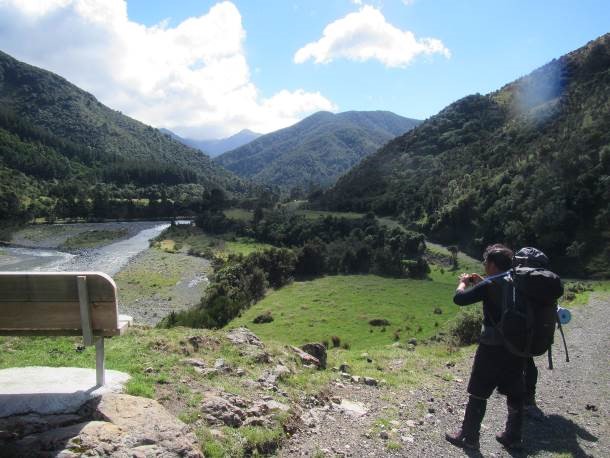 Thanks to all who went for a lovely weekend, magic!