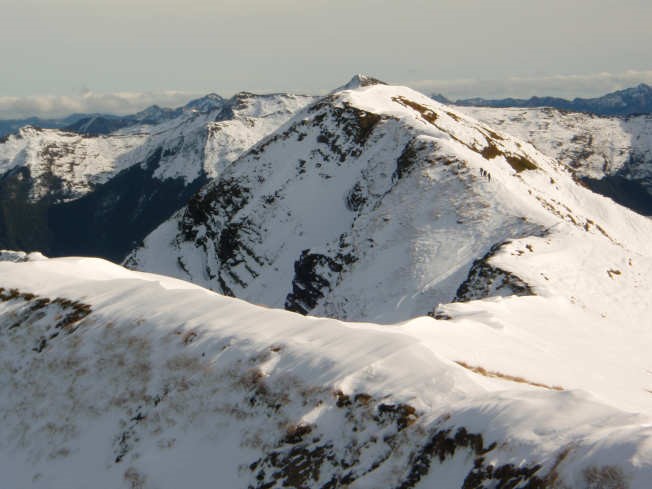 There were three, or maybe four, punters signed up for the Mt Luna fit trip. At the last moment two punters signed up for the med–fit trip. Hence the fit group heading over Luna divided back into a fit and med-fit party, who then re-molded together as one group made up of two separate groups, until such time people wished to peel off the back. This decision was made within the first half hour of the ferry trip and then Jenny retired to slumber as far too many changes were occurring.

The easy-medium trip punters (such kindly souls) allowed us to occupy the Rolling Junction Shelter at the roadend. The shelter can sleep 7, but only four resided there, as one decided to camp and delayed the morning departure. Team spirit is useful, or was it team spirit to save us from snoring? (NB DOC are hoping to upgrade this shelter and the new shelter may not give such great shelter for road end early starts staying there)

Saturday was sunny and still, the beginning of three days of no winds, a novelty for Wellingtonians. The re/combined fit trips wandered up the Wangapeka Track in the pre dawn light to Gibbs Route. The river was low and easy to cross. A well marked track led us to the snow which started well below the bush line.

The fit group’s decision to leave crampons behind in the van was a wise decision as the snow was too soft for them. The medium-fit group welcomed the fit group’s snow plodding and trench digging, and found it just fine to follow. However a few more ice axes or walking poles would have been useful to prevent cold fingers as the snow was soft and involved thigh deep leg lifting.

It took 2 hours to climb the 1 1/4 km from the bush edge to the ridge. We estimated we had another 2 3/4km to go and at our current speed would not be off the ridge until after dark. Looking north the peaks were white and looked as though they had even more snow than our ridge. We had views of Mt Owen to the south which looked easier going. Fortunately the wind had blown the snow on the ridge northwards to create cornices extending out to a metre. The back of the ridge was hence slightly more crusty and two footsteps could be achieved before crashing through again. An improvement on the ascent ridge where only one leg stayed up for every two that broke through.

The views were stunning. The pale blue sky had a strange grey-pink light to the north indicated that something was slowly brewing and moving very slowly towards us. An eerie light, we hoped the forecast was right, heavy rain tomorrow, as we did not want to be here in the rain. Slab avalanches could be seen and the drop offs to the south were sharp.

Due to the previous mathematical calculations of time and distance, lunch was a short affair with wonderful views, while seated on one (of only two) patches of snow free tussock discovered on the whole ridgeline.

Travel was faster along the ridge than expected but by the time the two teams had descended to Kiwi Saddle Hut at 4pm, revolts in the ranks resulted in the days planned trip stopping here. No one fancied another valley and ridge to ascend today. So in a hut designed for 6, 15 Wellingtonians shared the hut and surrounds for the night. The unknown party of 5 Wellingtonians were known by people on our trip, so a good catch up was achieved. It was the fit trips’ turn to camp, allowing some of the easy medium punters the shelter of the hut.

With heavy rain forecast and the rain dripping lightly, we changed plans. The fit and medium fit groups descended via Kiwi Track to King Creeks’ Hut the next morning. Two members called it a day and the remaining three continued to Stone Hut. A patch of blue sky and a hint of sun was noted while walking the track. The deepest puddle was on the wooden bridge and the most colourful objects were the bright blue stoat trap placement markers that had been laid that morning. A large patch of red scrambling bush lawyer (Rubus parvus) berries on the ground, enabled the forest’s bounty to be collected and stewed for crumble that night. The mushroom display, in every shape and colour, was bountiful. 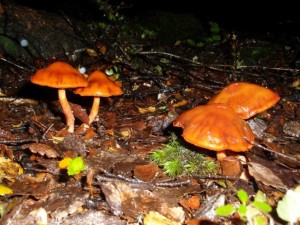 A DOC worker and volunteer were met at Stone Hut as the rain started. We were informed that 160mm of rain was expected in the next 36 hours and we were very glad to hear that there was a local telephone at the information kiosk at the Park entrance if we were stranded by high river levels on the wrong side of the river for the Picton ferry. We learnt a lot about the “Blue Duck Security Zone” which we were apparently in, and that 200 stoat traps were going to be laid along the Wangapeka Track between Chummies Track and Stone Hut in the next few months.

After the DOC employees had left we settled into a lazy wet afternoon by the fire doing yoga, reading, chatting and watching Illona create a feast and an amazing pudding, sour cherry and bush lawyer crumble….yum.

A pre dawn rise and stroll down the valley resulted in the fit trip being re-united with the rest of their party, and the easy medium trip at Kings’ Creek Hut. The Fit mix and mingle trip then managed to recombine into a group of four and a lagging solo adventurer who had wandered off again. The clouds lifted and sun appeared. We wandered down the Wangapeka River and back to the vans earlier than originally planned as everyone wanted to know what was happening to the river level and if we would be able to leave the park that day. Scrubbed up and fed at Rolling Junction road end, we waited for the last team member to arrive before heading off to the Bushend Creek ford in the vans. As anticipated the ford was too deep to cross. The local farmer arrived and told us to wait until the waters had receded to expose a particular rock before attempting to cross in our two wheel drive vans.

Booking shuttles to rescue punters from the other side of the river to get back to the ferry on time for an extra $60, re booking ferry tickets and letting all the WTMC officials who needed to know what was happening fell on Illona’s shoulders, who excelled at her second trip leader placement. So after saying goodbye to 15 members whose job was more important than a late ferry and feeling exhausted at work the next day, we had the most fun on the trip with the “Billy-Off” competition and eating vast amounts of food left over from all the other punters emptying their food from their packs so we would not be hungry while we waited a few hours for the water level to drop. Finally at around 6pm the drivers forded the river and we were on the way to the 10.30pm Picton to Wellington ferry.