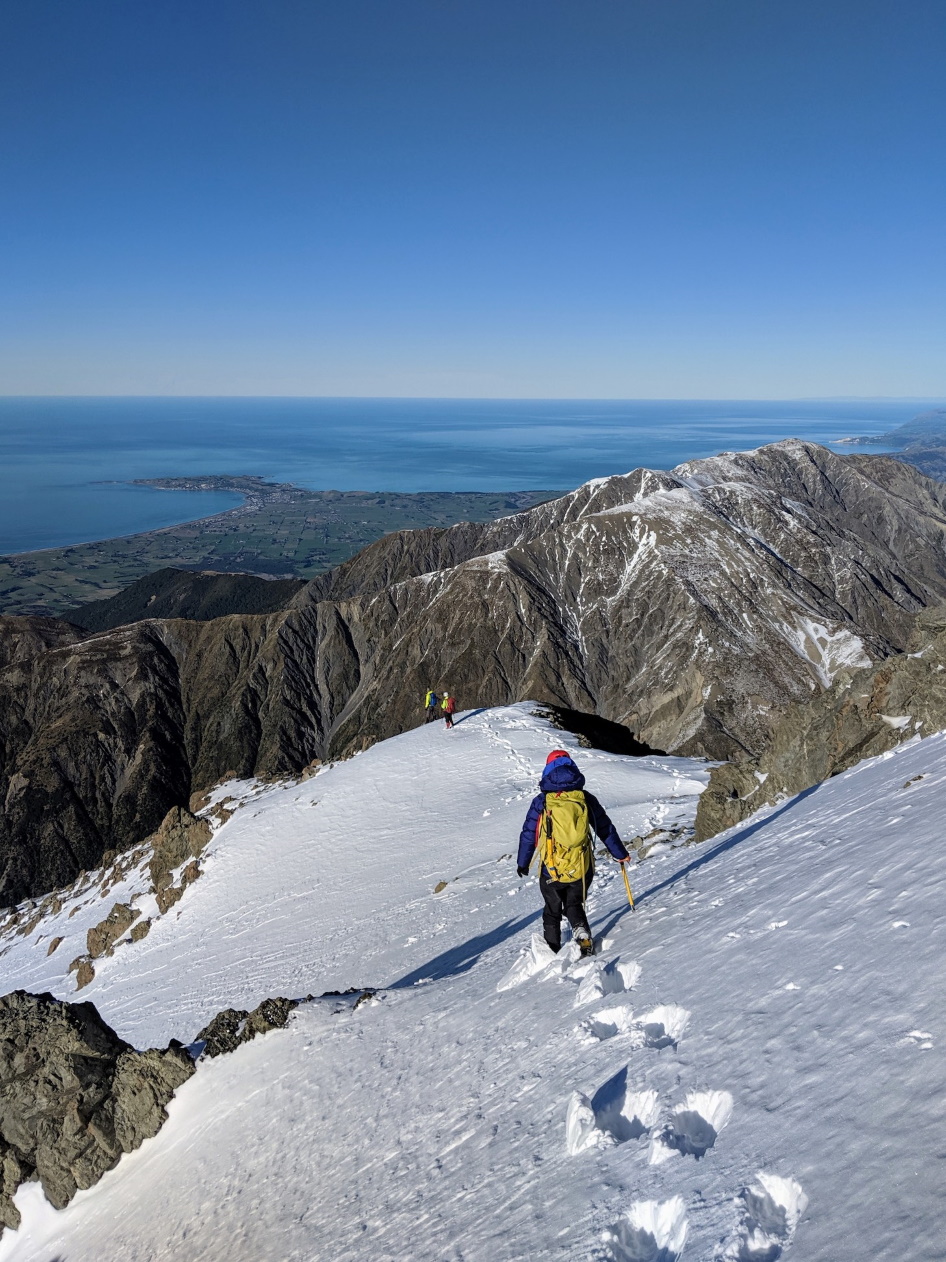 In June 2018 we attempted to climb Mt Manakau, the highest peak in the Seaward Kaikouras. We turned around at ~1500m on the Surveyor Spur as the snow conditions were slowing us down considerably and the weather was showing no signs of improving. After the weather conditions for the Southern Alps were forecast to be beyond dire this weekend, our well laid plans to attempt Mt Arrowsmith were scuppered and so I saw a compelling Plan B forming…

Myself, Elisabet and Tereza arrived in Christchurch after a non-eventful flight at 7pm, Gareth 30 minutes later. Instead of driving south west towards the Hakatere Valley, we headed north out of the city, stopping at The Warehouse to pick up some gas for the Windburner. Luckily for us, we’d hired a monster of a 4WD (these days known as an AWD) so 2.5 hours later, at the Grange Road end in Kaikoura again, we found we could drive straight over the first ford unlike last time (where we were soaked within 5 mins of setting off. If I thought that last year’s trip was an eye opener to the volatility of this mountain range, I was in for a real shock this time. The original site where we’d parked last year (complete with Doc sign and bushes) had been completely swallowed by the river bed below. It wasn’t cordoned off and looked like a completely different place. Over the ford we found a wonderful flat spot for camping the night and set about getting our heads down.

The next day’s approach was nothing like last year. On our previous outing it had taken us (by night) about 1.5 hours just to get to a flat spot on the terraces to the true right of the river for camping, and another 30 minutes or so to get to the start of the climb up the hill at the orange marker. We were at the orange marker after just 45 minutes today, with only 3 river crossings! The volume of the river was massively reduced, but also much more direct, meaning that we could spend long periods on the same side, even around the larger bends in the gorge sections higher up. Arriving at the orange marker was amazing – the difference in the layout of the valley floor was unbelievable; the river completely changed from just a year before.

The track climbs higher now, so as to avoid some pretty treacherous slips on the trail further along. It adds a fair bit of steep clambering to your walk in but worth it in my opinion. As I was pointing out towards the ocean at a water stop, a baby fantail decided to land right on the tip of my pole; it might have remained there had the whole group not blushed loudly in excitement! Sadly no photos as a result, but it followed us for some way afterwards. We named it Bertie the Bird.

After arriving to an empty Hapuku Hut we dropped our packs and headed further up the river to scout out the entry to the climb to Mt Uwerau. We were very glad we did it as it was a great chance to catch our bearings and find the way up the bouldery stream to what ended up as the mouth of a massive scree/rockfall field. The route guide suggests there’s an ALP1 here, in which you look for where the stream opens out, then for a tussock spur on the true right. My advice post quake? Good luck. If there is indeed this ALP1 route still as the writers intended, it certainly didn’t feel like it, simply because of the objective risk of rockfall and terrain management. There is a prominent tussock spur much higher up (~1300m), however you cannot avoid the shooting gallery to get there. Alternatively you could reach the ridge via the forest below, but from the stream bed it looks dense – we weren’t keen on the idea on trying to navigate that at night. We took our photos and discussed the plan, then headed back for a session of wood chopping and gear packing.

Throughout the afternoon we had a couple join us for the last two bunks, and then another solo tramper join close to dusk, who had laboured his way up over the Kowhai Saddle for the night. The couple volunteered to share a bunk, in the knowledge that our alarms were on for 2am, so only a few hours away from spreading out. After a dinner of satay noodles and a decent fire, we were in bed by 8pm.

An efficiently executed alpine start by all standards, we were soon back to the high point we’d reached yesterday, just 5 minutes slower than we had done before to my surprise. We were obviously well up for the challenge. By 4am we were at 900m and onto the ever-steepening scree slope below the bluffs above. It wasn’t long before we hit the dirty snow gulley, and not long after that that we learnt why it was so dirty. More than once, a couple of screaming rocks caught some of us on the arm or shoulder, so we made quick work of this section – using as much of the steady steps we created in the snow. Tereza and I were ahead as we reached a rocky outcrop, safe from falling rock above. At this moment, we heard a rather sustained rock fall kick off onto the slope we’d just exited. Elisabet and Gareth were just a few metres too far behind, so got caught out and had to take cover behind an outcrop below us. Elisabet got one in the stomach but luckily it wasn’t anything of note, just a wake up call to keep the pressure on through this section. They eventually joined us where we managed to get 10 mins rest on the first flat section in an hour or more. We attempted from here to take on a direct route on the bluffs above, but as Tereza pushed on ahead to check out the route, we quickly realised it wasn’t a wise idea as the rocks were again beginning to rain down. We quickly backtracked and executed plan B which was to move out onto a larger snow slope to look for a better route.

I found what we were looking for shortly after, a steep and winding slope which ended up taking us all the way up onto the ridge. For the next 400m in altitude we front pointed, switch backed, and scrambled up easy slopes until we landed on the ridge proper at around 6:15am. By this time the sun was coming up and soon after the head torches went off. It was a little disheartening to see we were only at ~1500m still – with another 700m gain to come. The next section of the ridge involved some tricky scrambling, but soon opened up to an almighty scree field at a nice 30 degree angle. I’d love to say we made quick work of this, but alas, just like that section on the North of Taranaki it was one step forward, 1.5 steps back.

At 7:45am we reached the snow proper. Here, at roughly 1900m, the ridge levels out for a bit, tempered by some challenging scrambling and borderline climbing sections in parts. The snow slopes to the right of us (on the east face) looked promising but we didn’t want to deviate too far from the ridge in case we found much of the same steep rock. So we decided to hit it head on. It wasn’t as bad as it looked, but I remember thinking it might not be so fun trying to down climb it.

Just 20 metres below the summit we hit some very firm ice, so we paused to get the crampons on. At 9:15am, over 6 hours after starting, we arrived onto the summit of Mt Uwerau, a small knob with a big plateau around, and perfect views of the surrounding range and the coast behind us. Also, our first proper view of Mt Manakau. Rather than the usual celebrations on the summit, we were all drawn to the sheer nastiness that looked like the traverse across to the larger peak. We stopped for a good 15 minutes to contemplate the situation, but there was more than enough experience in the group to make the decision pretty straightforward. No overnight freeze, unconsolidated snow, nowhere near enough snow cover in the first place, incoming gale force winds, and already 9:30am with less than 9 hours day light left. At a guess we’d probably only reach the summit of Manakau by around 2-3pm, and from there it was a difficult section on the ridge back to Surveyor Spur followed by an unknown down climb onto the spur itself. We also discovered that Tereza had some problems with her ankle which weren’t dying down, which sealed the deal. We swiftly turned back onto the summit for a bit of a celebration, and began the descent.

We found an amazing little snow galley to down climb on the way back, which avoided most of the awkward climbing sections, and were back onto the scree and then dropping off the ridge before we knew it. For any future parties descending Uwerau – you’ll find the ridge to follow is quite defined from the initial summit, but soon opens up and I can see why people have gotten into a pickle recently. My advice is stay right – keep leaning right as the ridge continues on towards to the south east more than you think. Look for Kaikoura and go right of that. The bluffs and bouldery sections that await beneath if you don’t do this are not nice and would make for a terrible descent. Eventually you will come over the crest and see the ridge appear again with the tussock slopes beneath. From there you can choose to stick to the tussock slopes, or head down one of the guts into the scree fields like we did. We stayed very close to the edges of this under the tussock slopes until we eventually found ourselves back at the mouth where the stream begins again. It took us a total of 2 hours 45 minutes to get from the summit back to the high point of the day before, and another hour to stroll back to the hut, happy to be away from the risk of falling rock.

We spent a very enjoyable afternoon chilling at the now empty hut – I even managed a snooze which is unheard of for me. A slight disappointment was the freeze dry meals we had brought in the anticipation of a long day. As the sun set, we watched the mare tails in the sky turn into a blanket of mid layer cloud, and with it, the wind set in. No one else came to the hut that night so we enjoyed a solid night’s sleep whilst the hut rocked from the wind and rain.

Sunday morning saw a wet slog out to the car, just like the year before. Climbing back up the hill at the junction was difficult as the slope was steep and oh so muddy. Even descending the other side was challenging; more than one slip was had. No sign of Bertie the bird this time, as much as we called out. I’d have stayed home too if I was that bird.

We made it back to the car in very fast time, always just slightly ahead of the rainclouds dominating the range. We dumped everything in the boot and drove straight into Kaikoura where I set a new post-climb record, managing 2 pies, a large coffee, a sausage roll, a caramel slice and a raspberry milkshake before admitting I was full.

Back to Christchurch, customary 2 hours browsing the climbing shops, then back to the airport where we re-packed the check in bags and flew home. Manakau, next time – you’re up.