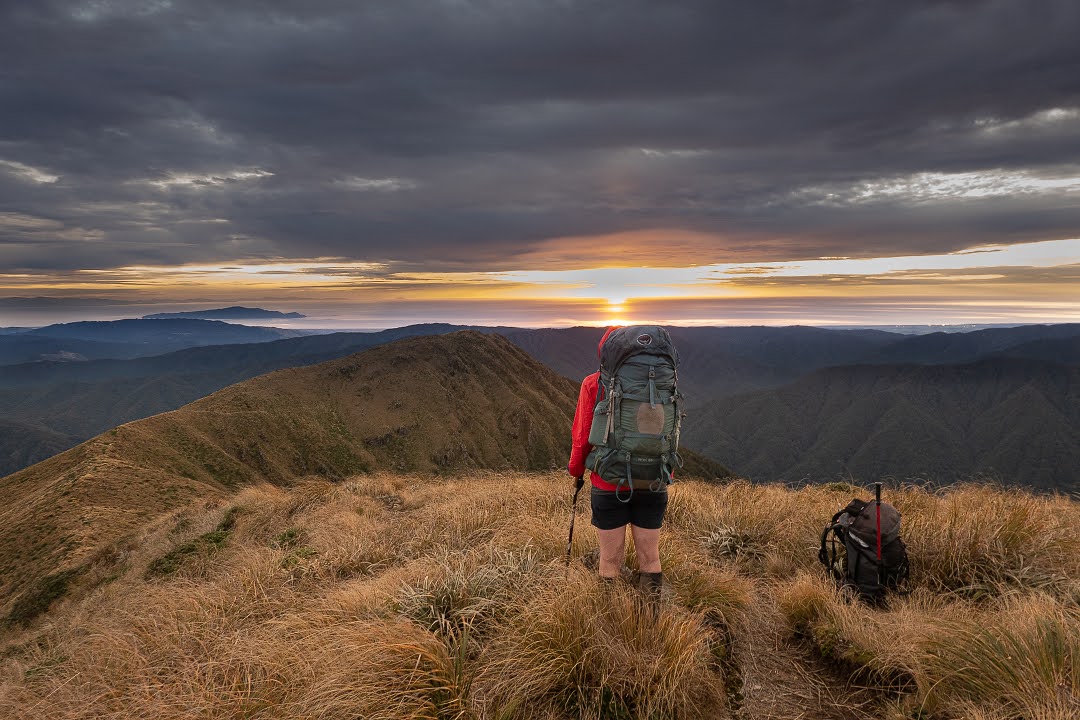 After failing to badger various acquaintances into taking me on a tramping trip, Tony took pity on me and said I could come with him to attempt a Southern Main Range.

Approaching the hut we saw two torch lights ahead. One was at normal person height, and the other levitated towards us at knee height. It turned out to be a dad and his little boy camping outside the hut. The little boy was wonderfully chatty, and told us he was looking for giraffes, but hadn’t found any. Later on we asked him if he had seen any hippopotamuses, but again no luck. Perhaps they had all gone to bed for the night.

Tony put on a brew before bed, and it was revealed that I had failed in my most important job of bringing sufficient teabags for us both. We had to survive the whole weekend on about 3 teabags – a magnificent feat of resourcefulness in these austere times.

In the morning at the carpark, we met a new friend Kyle. Kyle was going to do our planned tramping trip (the Southern Main Range) except he was going to run it in eight hours. We also met a new canine friend, Rexy. We didn’t know it at the time, but Rexy had wandered off from his owner who was hunting in the area the previous day. Rexy was looking for new friends too. I need only stretch out my hand and he got ridiculously excited and jumped on me.

Unfortunately, Rexy was so enamoured with us, he started to follow us up the track. Tony did his best to scare him off (we did not want him following us over the Southern Main Range! How would we get him up the ladder?!) but Rexy was determined to stick with us. We gave in, and Rexy ended up following us most of the way to Waitewaewae Hut (at which point he took off to chase Kyle).

Rexy provided a welcome distraction from the Waitewaewae Track. Neither I nor Tony were particularly keen on walking this stretch of track, made up as it is of tiring slogs and frustrating detours. In fact, we complained loudly to each other most of the way along the track about how horrible the track was. Despite my limited tramping career, I calculated this was my ninth (and later tenth!) time of walking the track. Tony of course had walked it more, but only on the old track. The new slip detour was an unwanted bit of “redlining” for him!

Finally at Waitewaewae, I felt that the bad bit was over and the trip could start for real! We had a quick lunch and then headed over the bridge and began the big climb up to Junction Knob. Despite being a continual up, this section of track was rather pleasant, with the dry leaves and twigs of an unseasonably warm winter crunching satisfyingly under our boots.

About halfway up, we met Rexy again, coming down with Kyle. Kyle had decided to turn around at Anderson Memorial Hut and bring Rexy out with him (a very kind decision). Tony offered Rexy some bread to eat, which Rexy took with some coaxing. Given Rexy’s penchant for switching between groups, Kyle had to hold him still while we walked off so he didn’t continue chasing us up the track!

At the bushline, I got my first view of Hector, looking along the Southern Main Range. It was a fantastic sight. At this point, I revealed to Tony I had lugged his fancy camera up (which I had in my possession for other reasons) and suggested we take some photos, which we duly did. In fact we took so many photos at this spot, and Junction Knob, it got cold and dark. We then had to hurry along to Anderson Memorial Hut to get warm.

Having arrived in the dark, a bit cold and disorientated, I immediately had great trouble finding the loo. I never found it, and was puzzled by how such a nice hut could be without a loo (of course it is not without a loo, daylight the next morning revealed it about 10 meters from the hut). Having put this unhappy toilet incident aside, Tony and I had great fun light painting the hut. Light painting is a form of photography where you light something up with a light source to get a good picture of it in dark conditions. I was amazed that the camera was so smart, and able to capture so much detail with just a few flicks of a head torch.

During the night the wind got up a bit, and at 3am in the morning we made the decision not to carry on (and therefore set our alarm a bit later).  As it turned out the morning was beautifully calm and clear, and perhaps we could’ve gone on, but I was perfectly happy with our decision. It meant we could wander slowly back to Juntion Knob, enjoy the views, and take lots of photos! This we did, with Tony showing me lots of new tricks on the camera.

I was rather sad to say goodbye to the tops, but we had to get home, so wobbled our way back down the nice dry track to Waitewaewae Hut. Here I read the log book for news of Rexy and Kyle. It sounded like they had passed through together, but that Rexy had run away and come back to the hut at about 10pm at night. That meant that Rexy had walked from Otaki Forks to Anderson Memorial Hut, and back again, and then back to Waitewaewae Hut, in one day! Even Kyle couldn’t top that.

At this point Tony and I had to steel ourselves mentally for the dreaded Waitewaewae Track, this, if I haven’t mentioned before, being my TENTH time of walking it. As we plodded along, I was slowly losing the will to live, thinking about ice cream, hot showers, clean clothes…anything to get me through. When we finally popped out at the junction between the old and new tracks, about an hour from Otaki Forks, I felt a great sense of relief. My spirits lifted, and then strangely enough who should turn up but Rexy. He accompanied us all the way back to Otaki Forks, where as we got closer, we could hear someone calling for a dog. Rexy’s owner met us as we came off the last bridge, thanked us for looking after his pup, and whisked him away. A happy ending to a strange story of a wandering dog!

Wobbling back to the car I felt very satisfied with our trip. One new hut bagged, a glimpse at the Southern Main Range, and some excellent photography lessons. Tony and I agreed that we would be heading back into the Tararua very soon…