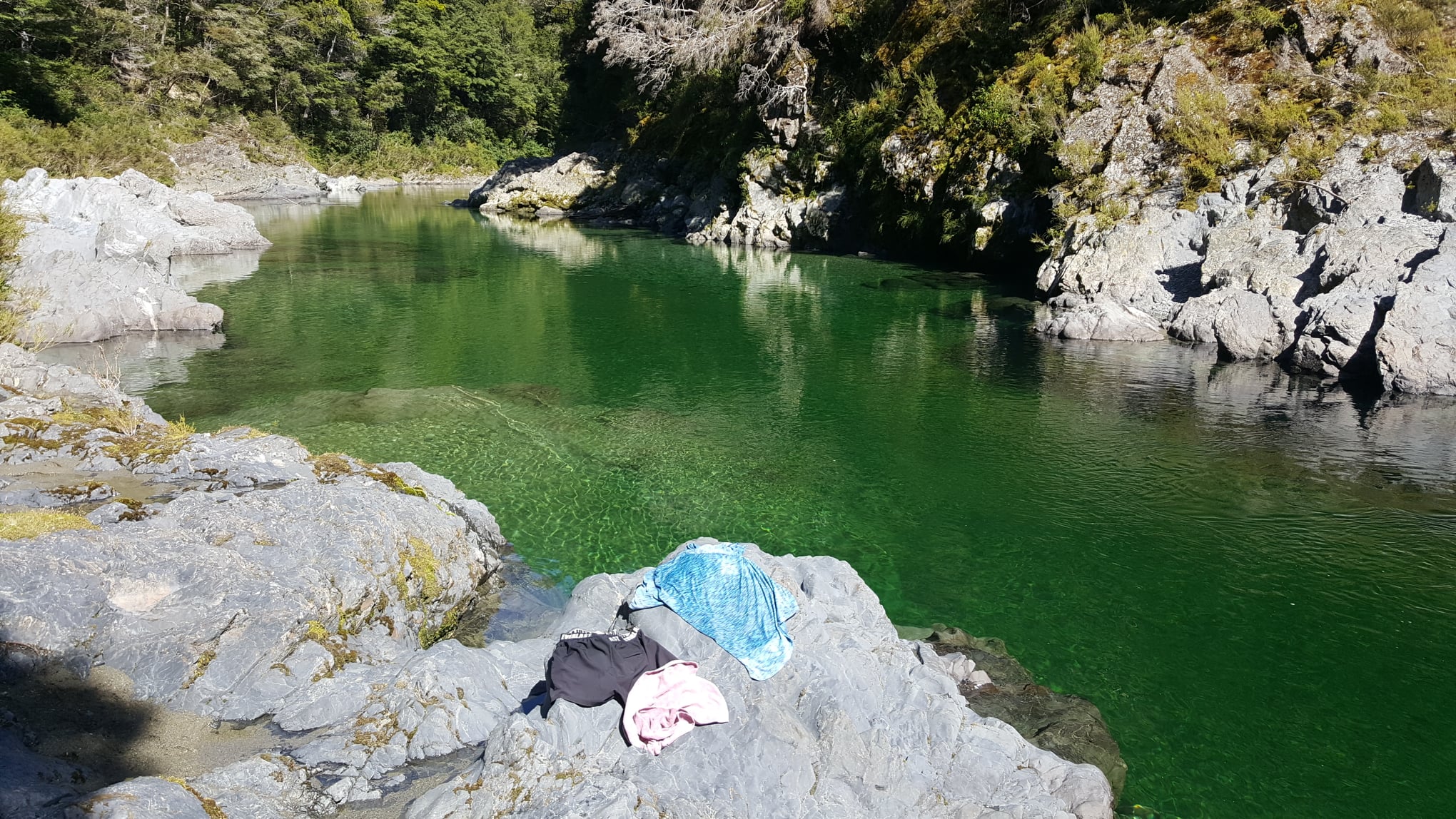 “You will never get there – it’s a really long way.”

Hmmm. This warning was delivered by a man pushing a bike along the Pelorus Track. I wasn’t sure how seriously I should take it given he was pushing a bike along a tramping track but decided to thank him for his advice and continue on given I had the flexibility to crash anywhere since I had my tent.

I had already decided this tramp was all about spontaneity and having fun – the idea for it had come about while cycling home after working some really stressful night shifts over the New Year period and realising I needed to get away for a short break. Most people had left Wellington for the holidays so it was going to be a solo tramp. While I enjoy tramping in a group, solo tramps are a completely different experience. I love the freedom they offer and opportunity for growth since I only have myself to rely on. On Sunday morning when I should have been sleeping, I was there trying to book a ticket on the ferry, and I managed to get one of the last tickets available for the sailing in less than 4 hours time. That meant quickly throwing everything in a pack and some interesting food choices since I didn’t have time to bike to the supermarket. In went a jar of peanut butter and a packet of spinach leaves.

On a sunny Monday morning, Helen from the Link Bus picked me up from the backpackers in Picton. I first met Helen back in 2018 when she was just starting out her business to service the newly built Link Track. Unsurprisingly Helen remembered me as one of the crazy runners she had picked up from Anakiwa after my friend Jacqui and I ran the Queen Charlotte Track in a day. Helen took me all the way through to the start of the Pelorus track at the end of the Maungatapu Roadend and I was on my way by 10 am.

The track follows the Pelorus River up the valley and after about 40 minutes I reached Emerald Pool. When I arrived here I found Sarah and Andrew who Helen had dropped off the previous afternoon – they were walking the TA route through to St Arnaud and were having a leisurely start after camping there. They showed me the best swimming area – a lovely deep pool with a sandy beach. I was grateful for that swim as it was starting to turn into a very hot day and the water was refreshingly cold. I kept an eye out for whio who were known to live in the area but I think the area of the river I was in was probably too slow moving for them.

Dragging myself away from the fun of swimming, I started up the track again towards Captain Creek Hut. The track started climbing up high above the river and where I bumped into the man pushing a very old bike with saddlebags. Maybe it was a good thing that the track was so tree-rooty and unrideable as I noticed his bike had absolutely no suspension and old school rim brakes. I had finally found a bike older than the bike I had before I upgraded mine a few months ago!

I arrived at Captain Creek Hut in under 3 hours and decided it was lunch. The spinach was at the very end of its life so lunch consisted of a wrap buried in spinach and the trusty peanut butter. After lunch it was time for another swim to cool off again before I got moving. It was a short easy walk of around 1 hour to Middy Hut – there were some beautiful emerald pools along the way and the swing bridges had lovely views down into the river. It was truly beautiful. On arriving at Middy Hut I went down to the river to replenish my water supply and contemplated another swim but as it was 4 pm I decided I should probably keep moving. There was a family there enjoying swimming in the river – they were heading to Rocks Hut the next day via the direct route so I waved good-bye to them and said I would see them the next night.

At the junction the right fork went up to Rocks Hut which is the way the official TA route takes. However, my route was the left fork which was the continuation of the Pelorus Track to Roebuck Hut. This track got a little more technical as it was a high sidle track and had some tree-fall. At one point I completely lost the next track marker and after a few minutes I stumbled onto the track again but in the process I had got myself completely disorientated about which way I had just walked from as I had circled around a bit. Night shift brain! After laughing at my own stupidity, I had to pull out my compass and map to get a bearing to ensure I wasn’t going to retrace my footsteps and wind up back at Middy Hut.

After 2½ hours I was descending towards Roebuck Creek and the hut came into view on the other side of the Pelorus river. After crossing the two swing bridges I arrived and tried to open the door of the hut. After a few seconds of me nearly trying to break the door down, the person inside the hut realised that someone was trying to get in and unbolted the door to find me there much to his surprise. He said when 7 pm rolled around he wasn’t expecting anyone else to turn up.

I contemplated putting up my tent but decided I would be lazy and just stay inside the hut especially since it was free of the bugs. Of course I went for another swim again before cooking dinner and enjoying the lovely starry night sky.

On Tuesday I had a leisurely start and wandered towards Browning Hut. It started with a good climb to get the heart rate up quickly and levelled out before doing a high sidle above Roebuck Creek. Again there was a bit of tree fall, or ‘lazy trees’ as I call them, to navigate. Browning Hut was actually a slight detour off my route and my original plan had been to go down there to replenish my water supply. There was a good creek right before the Totara Saddle junction but I decided I wanted to visit Browning Hut anyway as it would be a nice spot for lunch. While having lunch I met two bikers who had cycled in on their e-mountainbikes from Hackett roadend. I lazed around enjoying the hot sun for a while before motivating myself to do the climb back up to Totara Saddle and the track that would take me to Rocks Hut. It was a bit stop-start here as I kept chatting to lots of SOBO TA walkers who were curious if I was a NOBO walker. Most of the TA walkers were pushing through with a long day due to the bad weather coming on Thursday. I had great visibility as I wandered through the rocky outcrops and tussock.  I eventually arrived at Rocks Hut just as I finished my last bit of water. We had 8 of us in the hut that night, with only one TA walker which surprised me as I thought the hut might be a bit busier. I did the obligatory visit up to Rocks Lookout after dinner.

On Wednesday I walked out to Nelson via the Dun Trail. I ran the Dun Trail back in 2014 and always said to myself I would come back one day to go up Dun Mountain and visit Rocks Hut – I finally got there! Up on Dun Mountain I got fab views down to Nelson and across to Abel Tasman. Once I hit Coppermine Saddle and got on the Dun Trail it was rush hour traffic with lots of bikes. With the advancement of e-bikes, the trail has become much more popular than what it was in 2014 – it was great to see so many families out. I diverted off the Dun trail at Cummins Spur to take what I thought could be a possible short-cut – I can’t confirm if that was actually a short-cut in the end! From the end of the trail it was a few kilometers walk back through residential streets into Nelson CBD.