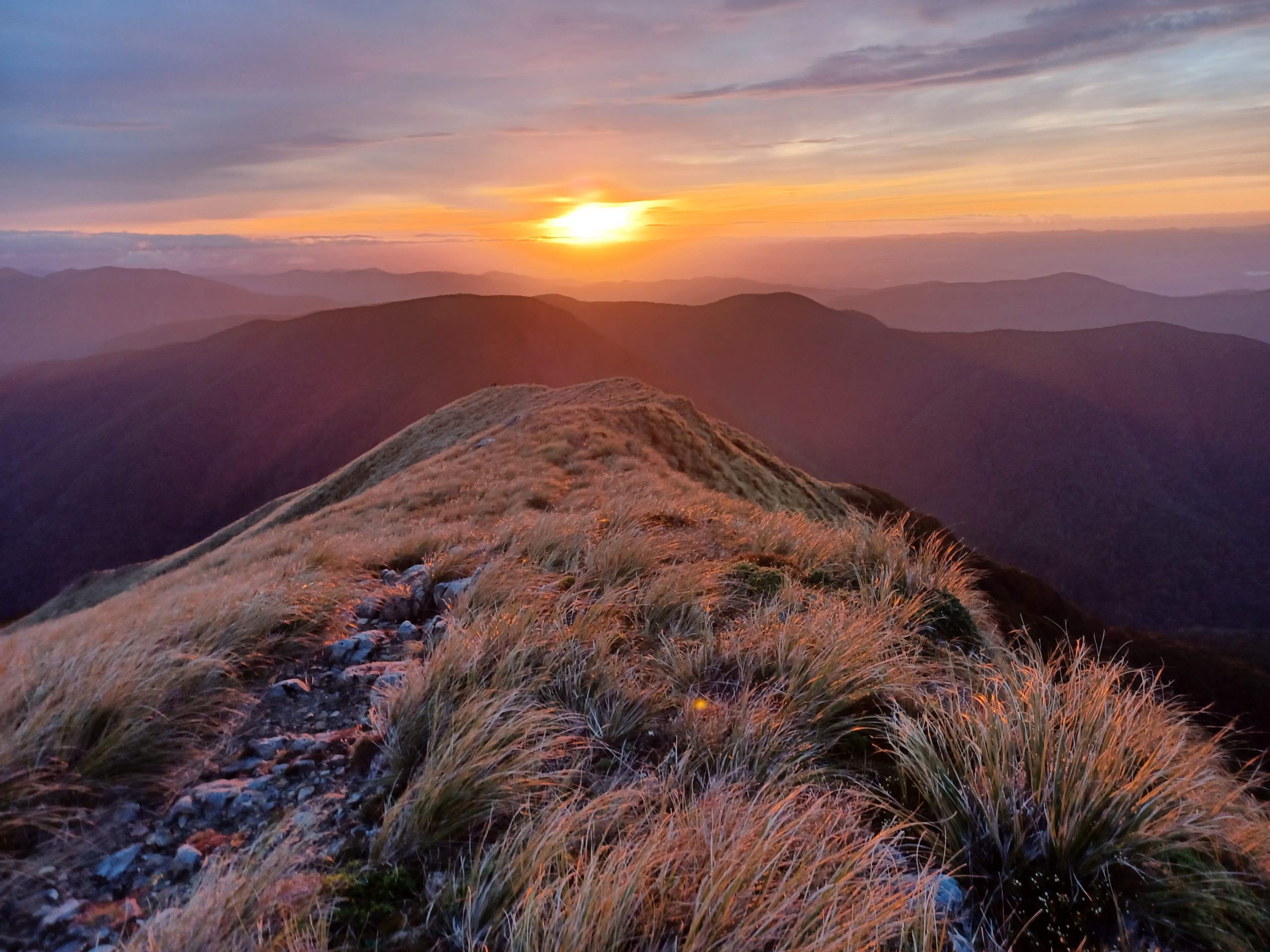 I was very nervous before this tramp. The trip leader was well known for being lighting quick, very strong and a great navigator. How was I ever going to keep up?! Of course there was never any need to be nervous. Tereza took most of the group gear leaving me with a light pack, set a pace that I could keep up with (most of the time!), and was a lovely tramping companion for the weekend.

After kindly being dropped at the Kaitoke campground by Richard’s Southern Crossing group on the Saturday morning, we made quick work of the 4WD track, arriving at the bridge over the Eastern Hutt River (by the mysterious and invisible “hydrology tower”) in an hour and a quarter. I then filled up with as much water as I could carry and Tereza set a good pace up the steep start to Quoin Ridge. After about an hour the worst was over, the terrain eased off, and I began to relax into a rhythm of following Tereza’s footsteps.

Just shy of the first clearing, we found the infamous “fragile plant” sign. For the next 350m we were confused by the short open mossy patches interspaced between thick scratchy bush. Random markers appeared from nowhere. Bushes opened or close with no warning. I felt as if we were Alices in Wonderland. I said to Tereza there was nothing fragile about these plants! We had our lunch stop at clearing no 2 and arrived on the broad flat summit of Quoin at about 2pm.

The saddle between Quoin and point 1100 also proved quite pushy and scratchy (although our heads were above the bush for most of it). I was amused at one point to see an almost perfectly straight line dividing the ridge longways – goblin forest on one side and scrub on the other. Each kept very strictly to his or her side of the line. The next saddle after point 1100 was still a wee bit pushy but easier going, and we were soon up at the 1200m contour line, contemplating the “big spur” we intended to head down tomorrow.

We reached Alpha Peak itself just after 4pm, at which point Tereza and I mutually decided to sit down and admire the view before descending to what we expected would be a busy hut. After shooting the breeze for 20 minutes it started to get cold, so we continued our descent. I kept half an eye out for any obvious entry to the “wobbly spur” just up from Alpha Hut (a route I had been threatening Tereza with beforehand), but saw nothing that enticed me!

The hut was indeed full – at least 26 that night – including the three WTMC groups. I was pleased to see the hut buzzing with life and had many interesting chats with all the occupants, including a little border terrier who cried bitterly when we shut him out of the hut.

We started before 7am the next morning. We were able to enjoy the beautiful pink light provided by the sunrise as we made our way up to Alpha peak. Within an hour we were back at the top of our spur. After a quick navigation lesson, we began the descent to Eastern Hutt Hut.

Tereza led the way, finding a good animal and/or people trail through some of the scrub for the first 200m of descent. At the 1000m contour line we had a choice to make – the spur was again split into two – straight down the middle. Did we get under cover of bush on our left or continue to push through the scrub on the right? We chose the bush. The trail disappeared and it became more of a “pick your way through the crumbly bush and dead wood” type exercise. For the next 300m or so Tereza did a masterful job of keeping us exactly on the high point of the spur. My inner compass felt all askew, but whenever I checked my GPS, we were exactly where we should be!

After letting Tereza do all the hard work, I took over the lead for the last 200-300m, just when a nice old DOC pest line appeared! From there we had bits of pink tape, the occasional tracking tunnel, and a very obvious ground trail. This delivered us neatly to the confluence of the Quoin Stream and Eastern Hutt River, and just over 2 hours after staring on the spur, we were at Eastern Hutt hut.

I now felt back on familiar territory, having done a trip to Eastern Hutt hut before. The day was warming up and I enjoyed the criss-crossing of the river and occasional jaunts onto either bank to take advantage of the flat and dry travel. Despite both of us looking out for the start of the track back to the hydrology tower, we missed it! But only by a few meters. At that point we decided to have some lunch, after which we felt sufficiently revived to do the 1 minute bush bash up to the track. This took us back to the mysterious (and still invisible) hydrology tower, and back up the 4WD track. For a change, we took the Norbert Creek track down and Tereza again masterfully navigated me to an excellent swimming spot!

We arrived back at the campground a few minutes after 4pm, where the other half of the Southern Crossing (Dan’s group) were waiting for us.

I was very content with our little adventure. It was something I could not have done without the excellent trip leader!