Leaving platform 9 an hour later than usual turned out to be a smart decision, with most of the Friday afternoon traffic already gone it was a smooth drive to Levin where we stopped for some food and to check out the public toilets with background music… really weird. Back on the road again we made it to the Mangawaka campground in good time and set up all the tents while Rory drove the members of the fit group to the road-end where he observed numerous possums along the road, a few of which preceded to commit suicide at the mercy of the van’s front wheels . After a good night camping listening to the relaxing sounds of the nearby river we awoke on Saturday morning and the campground revealed its beautiful surroundings.  It would be lovely to linger around but we were on a missio 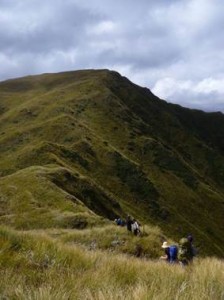 n… so all back in the van and a half an hour drive with beautiful views of Mt Ruapehu got us to the car park at the trail head.

The track began with a somewhat steep gradient; however it was well maintained with plenty of steps on the way. Nevertheless it was quite exhausting for most of our party and in some places quite slippery, as our illustrious tramp leader found out when he took a tumble off some slippery rocks and scraped his leg. We continued on and finally the track levelled out and we left the bush line to be surrounded by tall grassland and views of the uphill climb. Most of the climb to the summit was relatively easy, however the final stages proved to be quite steep and very tiring with a full pack and some disappointing false summits. After several stops for water we got to the summit at around 1.30 pm, and were greeted by the most amazing panoramic views of the Ruahine mountain ranges. 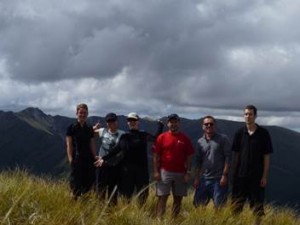 nch. There was some discussion about the route that the fit trip would be taking and as we were searching the various ranges for a glimpse of the route, someone thought that they could see the Pacific Ocean to the east.

The trek towards the hut continued on at a fairly level grade then a slight uphill that left everyone wondering if we were actually done of the hills. Fortunately there were no more major hills and we rambled down to the hut in about an hour reaching Rangiwahia Hut around 4 pm on a gorgeous sunny day.

The views from the top were inspirational; we could see the countryside to Mt Taranaki and the volcanoes of the Tongariro National Park. The hot weather made us really warm after an enjoyable trek up Deadmans Track. So we all relaxed, four of us pulled out mattresses to lie on in the sun – Paul, Inky, Rory, and Nicky, the others Ilska, and James lay out on the deck. Rory also tried out his new hammock, and had thoughts of sleeping in it. After about an hour and half we started dinner, risotto, which was served after around an hour of preparation. Ilske followed up the main event by making a yummy Chocolate mousse for dessert. We had delicious dinner and dessert on the sunny deck and watched a beautiful sunset. Nicky was in the long drop looking up at the new skylight only to realize that her sunglasses slipped off and fell down, down, down. She was disappointed but did not think that they were worth attempting a retrieval operation. The next morning we all packed up, swept out the hut, and left around 9. 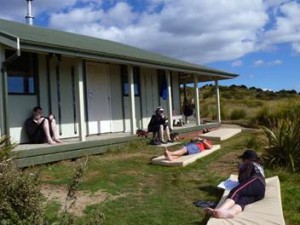 15 am. We climbed down a slip prone Rangiwahia Track to the car park.

We finished our tramp in glorious sunshine, with enough time spare to dry out our tents from Friday night’s camping and have a leisurely lunch in the trail head car park before driving the half hour trip to the Iron Gate hut road end to pick up the fit trip. En route, Rory pointed out the Apiti golf course in the middle of some farm fields, complete with fencing round each of the holes and lots of sheep!  (Apparently this club has a large membership as this allows crafty members half price entry into other courses around the country). 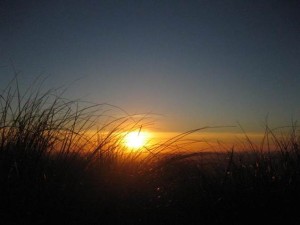 Once at the road end, we had time to take a stroll into the Alice Nash Memorial hut while taking bets on what time we thought the fit trip would actually complete their tramp (they did pretty good!). It was good to see a large crowd of kids at the Nash Memorial hut being introduced to the outdoors. We learnt some motivational tips from their leaders to get them up the hill- “Come up here – I’VE GOT LOLLIES!!!!”. Love it – we could definitely have a bit of that in the club!  Our trip was ended by another driving marathon by our star, solo driver, Rory, who got us back to Wellie in the early evening with enough time to go home and enjoy the last bit of sun after a fantastic weekend.