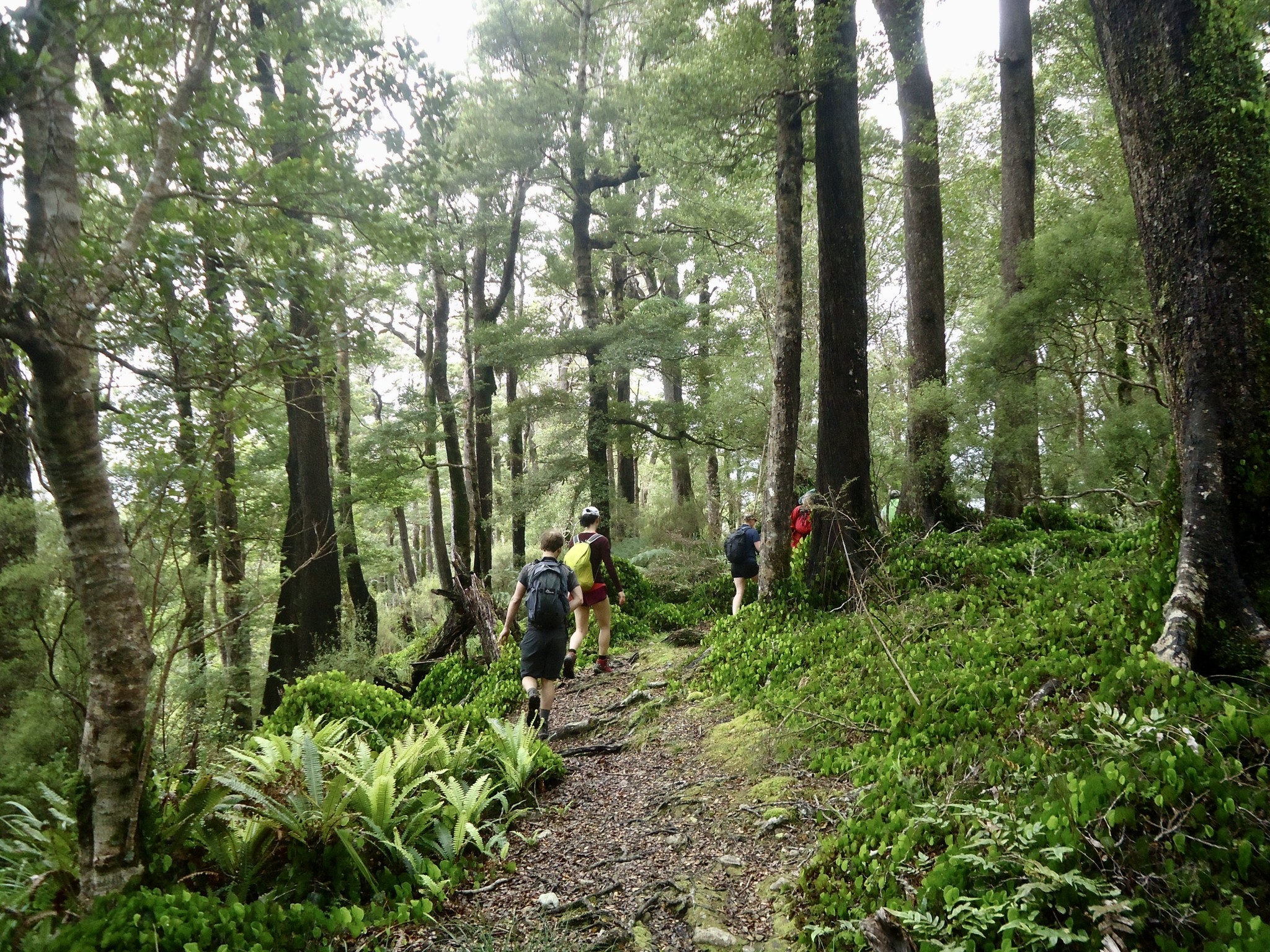 The five of us met at Wellington Train Station at 9am on Sunday morning and drove out to Kaitoke Regional Park. The Park is located in the foothills of the Tararua Ranges. The plan was to drive out to the Te Marua entrance of the Park (5km north of Upper Hutt) and walk the main skyline ridge to the Waterworks Road entrance of the Park, at Pakuratahi Forks (the confluence of the Pakuratahi and Hutt Rivers). This is a 7.5km walk one way – taking approx 3 hours each way, and then we would walk back the same way to the car at the Te Marua entrance.

The first stretch of the track was over grassland, but very soon we were in the bush – and remained in the bush pretty much the whole way to the finish. We were surprised that by about 30 mins into the walk we had already reached the ridgeline. And after just over one hour into the walk we reached the intersection to the Upper Valley lookout. You turn right off the ridgeline track and after just a couple of minutes of walking you come across a seat and a look out to the Macaskill Lakes. We only managed to see them on the way back though – as when we started the walk there was drizzle and low cloud.

Back on the Ridge track, it was a very enjoyable walk along the ridgeline – nice and soft underfoot as the track was covered with beech leaves. It was very scenic bush to walk in and it felt quite remote. However, there really wasn’t any opportunity to see views out on either side of the ridgeline (apart from the Upper Valley lookout near the start of the walk) as there were no lookouts.

We saw lots of kidney ferns and crown ferns with lots of ‘koru’ – new, unfurling fronds which still had their tight coil shape. As we started the descent to the end of the track we came across a very interesting shaped tree with thick, flat branches that were fairly low to the ground. There was a nice large, bushy cluster of epiphytes on one of the branches, and we all thought how nice and comfortable it would be to climb up there and have a nap!

It was a fairly steep descent down to the end of the track. At the end of the track, you follow a short gravel and sealed road down past the entrance to Rivendell, and over a bridge (which crosses the Pakuratahi River) and you arrive at a car park. We had lunch on a picnic table there and read the information boards. I also had a wander over the nearby suspension bridge (which crosses the Hutt River).

After lunch and a wee rest we went to explore “Rivendell” – the location where Peter Jackson filmed many of the Rivendell (home of the Elves) scenes for the Lord of the Rings: the Fellowship of the Ring movie. The location – a fairly small grassy area with beech trees, is just a few minutes walk from the carpark.

There are some really good information boards here -including notes and photos of scenes from the film placed exactly where they had been filmed. Well worth a visit.

We walked back to the Te Marua entrance of the Park the way we had come – it took us about 2.5 hours to get back to the car.

Good company and a really nice, enjoyable, scenic day out!