Our nine person tramp started out on a cool Autumn Friday night. A swift trip over the Rimutaka’s led us to the comforting stop that is Café Istanbul in Carterton. We all spread out amongst the cushions and enjoyed our nutritious yet affordable kebabs in a semi authentic setting. It is always a pleasure to dine there pre-tramp*.

We made our way up to the road end, flying across the Takapau Plain as the mist gradually thickened. At the road end, we had limited visibility so the ten minute stroll to Triple X Hut became a small exercise in navigation. Triple X hut is in great condition for one so easily accessible. 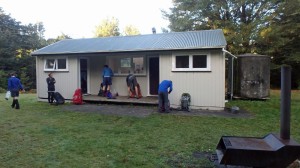 The sky was clear when we awoke and departed at around eight o’clock. After leaving the hut, the trail follows the Sunrise path for about 45 minutes. It then breaks off and descends for about the same amount of time down to the Waipawa River. There were a few hut bagging fetishists amongst our group and we downed bags and walked for five minutes to Waipawa Forks Hut. 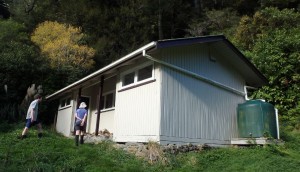 At Waipawa Forks Hut we talked optimistically, but naively, that if we got to Smith Stream by three o’clock we could try and bag the nearby Hinerua Hut as well.

The sun had made the river valley pretty warm by now. We followed it up towards Waipawa saddle. The river is reasonable easy to navigate and it eventually gets to the foot of a small knob that is marked by a large orange triangle. (For future reference all drink water bottles should be filled before here was there are no more water sources until the hut.) 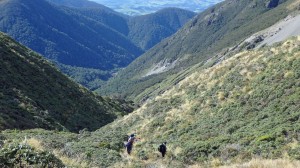 The track ascended very steeply up to a foot trail just before the saddle. It was very windy on the saddle and this made stopping there for lunch impractical. We dropped off the saddle and sat down on the track Lord of the Rings style to eat and enjoy the clear skies.

Unbeknownst to us, the crunch of the walk starts now. The trail veers east, climbing along a narrowing spur towards Three Johns before turning south over to Rangioteatua. The terrain is a combination of shallow scree and deep tussock. The tussock gets very thick near the summit of Rangioteatua and is infested with large clumps of hand pricking spear grass.

The bare top of Rangioteatua has fantastic views of Ruapehu and Ngauruhoe. We reached it at three o’clock and any hopes of getting to Hinerua Hut were over.

The final part of the journey heads over to pt. 1715 before dropping down some semi deep scree slopes to the bush line. Once in the forest it is a largely pleasant hour long meander with the occasional slip to Smith Stream Hut.

The hut sleeps four in bunks but can comfortably accommodate two more people on the floor. 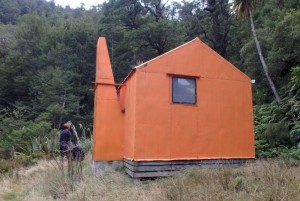 We left earlier this morning as we wanted to be back in Wellington at a decent hour. After a small piece of trail, we stream bashed our way north for an hour towards the next piece of marked track. 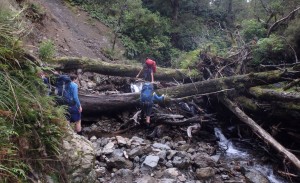 According to the map the track starts immediately after the first fork in the stream. However this is not really the case and future trampers should be aware that they need to travel about 100-200m further up to an obvious large orange triangle. You don’t want to end up making the effort to climb 60m up the slope near the forks to a rather precarious point of no return only to have a do a tricky descent back to the river.

The rest of the journey is a largely uneventful mix of native forest, exotic forest, farm land and gravel roads.

At the end, in a refreshing reminder of the inherent good nature of people, one of our party, who had left their wallet and phone at Triple X hut, returned there to find a note saying that the items could be found a Waipukurau Police station.

*Full Disclosure: The author received no discount from Café Istanbul for this endorsement. However, if they read this report, he is more than willing to open a dialogue and come to some form of arrangement. Let’s talk.