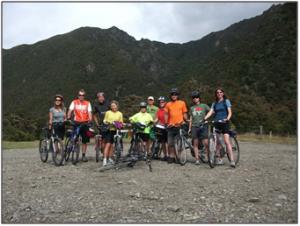 Fish and chips, pizza and Subway at Paraparaumu gave the group a foundation of reserves for the start of the long Waitangi day Weekend on Friday eve. We reached Mangaweka international airport around 9pm in time to check in for a flight to la la land, pitching our tents at the departure gate campsite down by the river. This was a great spot with showers and toilets and close to Taihape Township which is where we were leaving from the following morning. $7 camp fee. 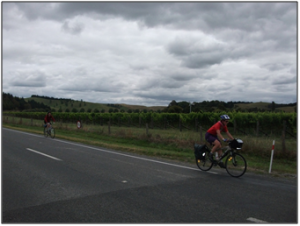 The cycling group: Cycling day one of the Gentle Annie (author: Christine Latimer)

Up early and ready to start the mission. A variety of mueslis were compared at breakfast, ablutions completed, we regrouped at Taihape where the cyclists got ready for the first instalment of the 139km ride. The day was overcast and gloomy and rain threatened…hmmm.

The riders, 6 of us, set off at 9ish from the New World after doing a last minute shop. The gruelling ascents and descents started straight away and lasted all day until we got to our destination tired and sore. Even though Taihape is at 400m we still climbed to 950m before lunch. Lunch was at Springdale Bridge which is on the Gentle Annie road which runs from Taihape to Hastings. The 77km ride was hard work with not a lot of cruising to be had. Rather a lot of the same scenery and not much worth seeing in the low cloud and it is sheep country!

We were certainly ready to finish when we arrived at the campsite for the evening. We made it by between 5-5.30pm and with no rain in sight. 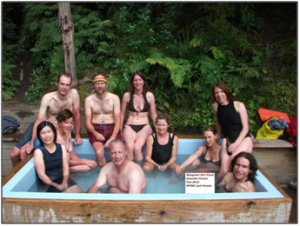 When we arrived at our camp site next to Mount Kuripapango we put up the tents for the cyclists and sat down together to have our lunch, during which we had a great time coming up with all sorts of scenarios of what we could tell the cyclists about what we had done and what we would actually be doing during their absence. 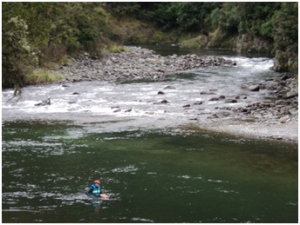 The tramp up Mount Kuripapango was quite steep and in parts rocky. The vegetation was low most of the way up, therefore the view of the surrounding landscape was amazing.  The river down below curved itself around the slopes of the hills.  For our short snack breaks we sat down and enjoyed the view.  The weather was good for the climb; no rain, relative clarity and a pleasant temperature.  Closer to the top of Mount Kuripapango the vegetation changed into lush pine forest in different shades of green.  At this level we also walked into the clouds which seemed to submerge the upper section of the hill.  At approximately 1270 meters we reached the summit.  We made great efforts to prop up the cameras to take a photos of all of us next to the summit marker.  Half the group went down the way we had come up and half the group went down the other side of the mount.  All together the tramp up and down Mount Kuripapango took us 4 hours.  The company and walk was great!

The DOC campground at Kurikapango was fairly busy but was a great spot with fabulous swimming holes and is within the Kaweka forest park.  After a dip for some and a swim for others we were ready to eat. Dinner was a joint effort and a delicious combination of fresh fish, vegetables and rice in a creamy sauce.  Camping fee here was $5, a bargain.

We had a relaxed breakfast and strong coffee before packing up and getting ready for the second leg of the cycle. As it was only a mainly downhill 55km ride, there were 9 people who participated. After checking our bikes and posing for a team photo, we set off with a hiss and a roar. We soon separated as the first climb started straight away, but as agreed, we regrouped at the top of the hill, after about 45 min. It was noticeably warmer as we descended into HB, despite us having an easterly head wind.

There were more rolling hills and views compared to the first day, and it was great biking between two ranges: The Ruahines on our right and the Kawekas on our left.

Having drink and snack stops ensured that we stayed together reasonably well, and we were doing good time for our planned lunch at Fernhill, until one of the riders got a puncture!! This was fixed in no time and wasn’t a bother.

The last 15 kms was flat and I thought it was beautiful biking through the vineyards, farms and over many small rivers.

We meet the van at Fernhill, and had lunch on the Marae lawn. All loaded up, we all anticipated the Mohaka river and the Hot Pools in the Kawekas. We passed some hamlets which broke up the sheep country somewhat. We got some great vistas of Hawkes bay this day as well.

Arriving at the Mohaka River free campsite after 1 hour drive,  we negotiated a cosy campsite before a soak in the hot tub, perched in a deck partway down the hill above the Mohaka River. As we soaked, the grease, road dust and sore muscles washed away. Suitably relaxed and by the fire, we prepared and indulged in another gourmet, cordon bleu dinner, designed by Maarten.

Soaking and tubing in the Mohaka (author: Debbie Buck)

Awakening to drizzle on Monday, we caffeine-loaded, packed up and prepared for the day walk and tubing. We traipsed along a well made track with misty views of the river before stopping at a launching spot. After a bit of pfaffing by the tubers, and pumping of tubes by everyone, we were ready to launch just as it started to drizzle again.

Some of the group headed back to the campsite for another soak in the hot tub amidst the greenery overlooking the river. Maren and David volunteered as paparazzi and walked back more slowly, capturing the ‘voyage of the tubers’ on film.

Christine and Richard shared the mega-tube (aka ‘the throne’), which was 3 concentric tractor, truck and car tubes lashed together. After a bit of re-adjustment, they were away, lying in ‘the throne’ riding the rapids face-first! 3D glasses were superfluous in such circumstances. Debbie and Maarten rode the rapids in a more conventional style, and seemed to stay in their tubes more easily.

The river level was perfect, creating fun easy rapids with only a few bumpy rocks. The scenery was stunning as the mist drifted here and there in the narrow valleys alongside the river. Some challenges included an eddy that wouldn’t let Debbie escape easily, loss of Richard’s glasses, and the shyness of the sun.

Fortunately, just as Christine was reaching the point of intolerable chilliness, we sniffed out a sulphurous, slimy green hot pool for her to lie in. After a bit of indulging in the warmness, we set off once again. It wasn’t long before we saw a blue towel flying (the other Christine’s) from the hot tub in the trees, signalling our exit point. Pure bliss was had by all the tubers as we joined the walkers and stretched out in the hot tub.